blane.c said:
Despite mileage and tire wear most/many trailer tires are obsolete in approximately 7 years. They will not pass a vehicle inspection in most/many states. They have a code on the side of the tire that gives the approximate date and the manufacturers have the information of how long the tire is good for. I have 8 trailer tires with little mileage virtually new tread and are illegal on the road due to age.
Click to expand...

So it's a racket! Are regular passenger car tires too stiff or too soft to use on trailers? Seems like most vehicles now have tow ratings far below the weight of an average car, so average car tires ought to be safe to use. Maybe?

blane.c said:
Despite mileage and tire wear most/many trailer tires are obsolete in approximately 7 years. They will not pass a vehicle inspection in most/many states...
Click to expand...

That only applies to commercial vehicles subject to DOT inspection and federal Motor Carrier regulations. Though you may hear many different opinions, you can legally drive a tire as long as you want on a private vehicle. That doesn't mean it makes sense though. Many experts advise not going past ten years, and generally recommend replacement at six or seven.

It is hard to justify the expense of tires over the value of the trailer and it's cargo, depending on a lot of variables.

I would imagine it's more critical on an RV instead of a trailer. Of course, the trailer type matters too. My flatbed trailer has four tires, so a blowout isn't likely to create any sort of critical scenario. Nevertheless, risk management still applies. I'm more likely to replace tires on a trailer that carries an airplane than one that carries my lawnmower. We each have to assess our risk and decide from there. My trailer tires are now ten years old. I hadn't really thought much about them until now. Usually I only haul lawnmowers, 4 wheelers or other relatively low cost items, and as I said, it has four wheels. The spare is new! I'll definitely put tire replacement on the 'to do' list, but I'm not in any great hurry right now. Then again, 4 wheelers are getting reeeeeeally expensive.........
P

This is one of those sneaky kind of requirements. Often times states require that vehicles be designed to restrict things from being thrown from the road.
I move semi trucks, and this is one of those gotchas that states use to require fenders and mudflaps.
Not to mention all states require that you are responsible for damage done by your vehicle this of course includes if your tire picks up a rock and flings it into another vehicle.
P

Forget the value of water on the trailer a few years ago a couple from Pennsylvania was touring Idaho while towing a small car behind their motorhome. Attire went bad on the car and got so hot that it threw flaming chunks .
The resulting inferno of fire started on each side of the road not only terrified following vehicles including a gas tanker , cost the state over $1 million to fight the fire.
A cost that the state quite happily charged the couple for.
They didn’t seem to think that they should have to pay , personally I thought they should spend at least a few years in jail for the lack of courtesy and mental damage to the poor truck driver behind them!

Did I send this? This is not about 'Trailer design', but Airplane Design in general. Engineers I sent this told me it's a very good book.
Blessings +

And this.
Salut +
Left without content by site administrators, attached documents were copyrighted. Sorry for inconveniences.
Last edited: Oct 12, 2021

Kiwi303 said:
For the hydrolastic type suspension, look at the MGF, I had one, great ride.

At the other end of the scale, the walking beam gave the Scammell Pioneer and Explorer trucks some rather extreme offroad capability for the time.
1930s and 1940s trucks with better articulation and suspension travel than a Baja 1000 or Dakar racer. A lot slower but plenty of torque.

Good grief why would anyone recommend one of these?
Outside of their Native Switzerland they are nearly useless and only slightly more useful inside of Switzerland.
T

I designed and built my own tilt deck car hauler in 2017. 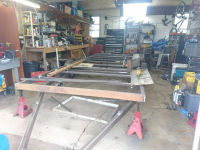 Took about 3 weeks, cost about 1/4 of what it would have cost to just buy a similar one, and weighs about 2/3 of what the store bought models weigh.

I did this both because I wanted a cheaper, better, lighter trailer, and because I had a really specific design requirement, in that I needed it to fit in here: 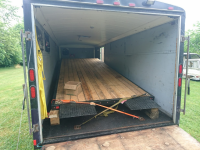 And there was just no way to make that happen with a store bought one. 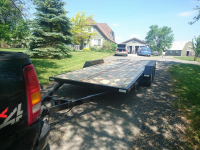 It has held up extremely well and has seen extensive use for the last 4 years.

As far as design tips... I just overbuilt it. For figuring out how strong stuff needed to be, I looked at similar trailers and copied their design, or did it in ways that I thought would be stronger, or obviously overkill.

I really wanted low fenders AND a low deck, which is hard to do, so I built my fenders as close as I thought I could get away with to the tires, and made them so that if I had to make them taller it would be easy to modify. Luckily they work perfectly, I don't think I could have gone any lower without the tires rubbing, and they're low enough to open the doors on a corvette or skyline without them rubbing on the fender, which was what I was hoping for.

It's easy to make a much better trailer than the commercial ones, though, they're all designed to be cheap and fast to build, with very little effort put into making sure they are good at the job they are doing.
T

So the issue is when one state has a maximum at fed max, and the next door state has state maximums lower than fed maximums.

So if Fed says 9', State A says 8'6" and State B says 8'. Then 8'6" State A Trailers can be used on the Federal interstate in all states but not on State roads in State B.
Click to expand...

For non commercial vehicles, if it complies with the laws where you live, you are allowed to drive it anywhere in North America (and a number of other places, but that doesn't really matter to 99.999% of people). Exceptions being places where vehicles are specifically excluded by MUTCD compliant signage.

Urquiola said:
And this.
Salut +
Left without content by site administrators, attached documents were copyrighted. Sorry for inconveniences.
Click to expand...

You can cite good books that are copyrighted by title and author and even publisher so others can go buy them or check them out of a library. We just can not allow copyrighted material to be posted.

Terrh said:
I don't think I could have gone any lower without the tires rubbing, and they're low enough to open the doors on a corvette or skyline without them rubbing on the fender, which was what I was hoping for.
Click to expand...

I knew that Harley clubs in the ‘80’s and ‘90’s always had a motorcycle trailer follow them on trips, but I thought the Corvettes did a little better.

Hello Topaz
Bit slow on this one as i've only just got around to joining the forum
On account of being a sailplane pilot in the UK i have a lot of non soaring days to find something to do with
So ive spent the last decade recycling old sailplane trailers
Unlike now, where you can prety much only buy a Cobra or Kommet most of the trailers i work on are 30-4 years old, when there were a much wider range of construction methods in use, so i have probably seen something that would work for you (wood, fiberglass welded aluminium, welded steel, clad in fiberglass, aluminium, wood.

I could sketch out a steel tube frame with tube sizes and wall thicknesses, based on common practice (designed is not realy the right word, lots of TLAR in there) which you can glue aluminium sheet to as a cladding if you dont fancy 1500 rivets. (current construction method of Shirenewton trailers in the UK, only people i know of still making box trailers for sailplanes.

Ive also done a lot of work on trailer fitting, which are rely important if you are going to rig the airplane each time you fly, and more difficult if you are no able to copy current lift top trailers

So i may be able to help

I would note there must be 20,000 sailplane trailers in Europe, and for the past 40 years almost every one has been built with rubber sprung torsion beam axles and over run drum brakes (as in the Alko axle on a Cobra trailer). they dont seem to break gliders, so must be ok, though clearly trailer design and towing practice are somewhat different in the US, and i have no idea what parts you have avilable (wider choice than we have by the sound of it