A40 is awfully heavy for its HP/displacement.

Coming out in favor of the Cushman Case & Crank.

3) Weight is Actually 80#, not theoretically such.

llemon said:
A40 is awfully heavy for its HP/displacement.
Click to expand... 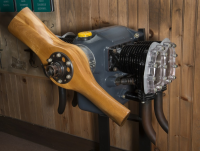 In case nobody has posted this link to these engines yet:

does any one know if there are any difference in horsepower between the vw-half and the 2ao42 2 cyl engine. i know the horsepower rating thru the government on the 2ao42 was made at 10000 ft at 110degrees at brutal hours. and at sea level these engines rate at more hp.and has anyone try ed...

How about a modern take on the O-145? It had the case and all four cylinders cast as one big piece, which I guess is spiritually the precursor of how a modern industrial engine is made. In our small-numbers aviation world such a thing could probably be machined (and I imagine cylinder bores sleeved) and OHV industrial engine heads used. There’s not a whole bunch of options for off-the-shelf crank and cam, I guess VW but the rest of the engine would need to be better enough to not just use a whole VW instead.

So I figured that to be worth searching and unfortunately your claim proves false. It is in two halves and a bedmount engine, better to check out here: Lycoming O-145-B2
Last edited: Aug 25, 2021
P

Every time I think about a new aircooled gasoline engine, I can't help but envision a finned Dmotor. 4 (or 6 for higher power) little cylinders and integral gear reduction. You either get the power from displacement or RPM and both have the potential to work. I just like the idea of a bunch of little bangs instead of a few really big ones. Also like the potential simplicity of the F head design (IF one was to be doing 4 cycle spark ignition, that is).

F head, that's Neat for sure. 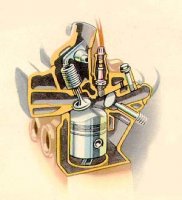 The O-145 I like, and it’s the same as the A-40. Old manufacturing capacity makes it heavy. As long as the engine is not crack prone, it would be much easier to do head work with separate heads from cylinders. If the case was crack prone it would be not a favorite. From what I understand most Cubs were O-145s but were converted to A-65 instead of overhaul the Lycoming. I know someone with two on the floor. They are probably both single ignition though. It’s hard to beat the bigger prop on the same horsepower of the A-65.

Don’t know what to tell you on that one. I seem to recall all four cylinders and a sort of frame making up the perimeter of the crank case being one big casting. There was a top cover that bolted on and an oil sump that bolted on the bottom. No idea how you’d wrangle in a crank shaft or hold it there. Maybe Toobuilder knows, IIRC he has an O-145 in his Taylorcraft.
T

The cylinders are cast into each case half. Two on one side. Two on the other.
H

Interesting thread, though it seems like the problem of powering light personal single seat planes goes back decades. After it is all hung out to dry, cost is a major factor as well too low of a power to weight with the current crop of available engines. The two ideas that seem to have the greatest traction are the V-twins and two cylinder boxer designs. Unfortunately they are slightly heavy for the power, and have vibration issues.

After looking at other configurations, the 3 cylinder radial appears to resolve both the weight and vibration issue. Most radials have subtile problems, such as oil scavenging and a lope that is due to the different strokes that each pair of piston travels due to the use of master rods and slave rods.

Two radial three cylinder engines are worth study. The Verner which only weighs 73 pounds without a starter on (with 100 ci) is remarkably light. This is primarily due to the fact that steel is heavy and aluminum is not. The length of a crankshaft can be much shorter and lighter plus the heavy counter balance normal with most engine configuration is not required because the piston and rods weight is already canceled out. The only balance required is for the crankshaft pin. Of course with a master rod, that excess weight has to be canceled.

However when I examine the Radial Motion triple, I discovered they used no master rod, but instead offset each cylinder the width of the rod. I guess if you can put two on a pin in a V-twin, three doesn’t make much difference though there may be a slight rocking mode. Having three equally spaced power strokes with the same displacement should be the smoothest configuration. Whether this concept could be extended to a 5 cylinder engine is open to debate.

Honda makes a surprising number of cylinders for their industrial twins and singles of different bores and strokes. So a 1 to 1.2 liter engine would be a target. Each jug would probably run into $500-700 range for new parts in low volume.

Highplains said:
Interesting thread, though it seems like the problem of powering light personal single seat planes goes back decades.
<< >>
After it is all hung out to dry, cost is a major factor as well too low of a power to weight with the current crop of available engines.
Click to expand...

That can now can be measured in millennia.
<< >>
$$/power/weight. If we could only decouple the numerator from the denominator (s). 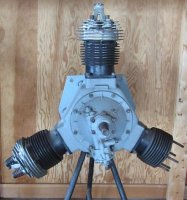 A "shaky Jake"...just what you need to cause your aircraft to vibrate apart in flight.
B

I think one thing that is pretty well essential to reach the power/weight ratio required is to be gear reduced. If we give up on the idea of using some production parts and weight is to be optimum, it is hard NOT to consider 2 cycles as the best solution. If one goes radial it is possible to use a supercharger to do the cylinder charge and scavenge but not we are talking a LOT of design/build components (aluminum cylinders and pistons should be available, though)

PMD said:
it is hard NOT to consider 2 cycles as the best solution
Click to expand...

Hope one of those projects, that you can't say too much, about bears fruit.

Hot Wings said:
Hope one of those projects, that you can't say too much, about bears fruit.

Thanks. Hoping S&F but realistically OSH 22. In this thread I was kind of thinking almost DIY simple. 2 stroke radials can do that. For TV reasons, 3 cylinders are the absolute minumum, but if we miniturize, 5 could make sense. I was thinking something like a 3:1 PRSU from a small automatic trans, 3 AL/Nik chainsaw cylinders, some magic small 4 or 5:1 planetary driving a centrifugal blower rotor (OTC from somewhere) that would be direct driven from a PM DC starter motor. For the kind of simplicity I am imagining, a single carb is a must. Can see the major elements in my mind, but have no idea where to get existing components.
You must log in or register to reply here.
Share:
Facebook Twitter Reddit Pinterest Tumblr WhatsApp Email Share Link