Yes, there are mounting considerations, but breaking the leg and putting all the bending moment from a balanced landing through the fuselage will need a stronger fuselage again. About double than if a C spring is used if I remember far23 correctly.
Last edited: May 16, 2019

Question:
Just thinking out loud here, so please don't flame me for what might be a silly idea.
Thinking about wings - struts vs cantilever
One of the reasons a cantilever wing (on any aircraft) is a challenge is that it needs to be adequately anchored to the fuse. On the Ranger it is particularly an issue, because the fuse is barely 200mm wide. However, instead of struts which go out to the mid-point of the wing, what about mini-struts, which attach to about 500mm along the wing? Kind of a hybrid cantilever/strutted wing. No struts to get in the way and cause lots of drag, and yet providing sufficient anchoring to the airframe.

I'd like to keep the wing folding or rotating system , as hangar space is scare and expensive. I live with that weight penalty for the folding mechanism.

The weight penalty using the method we discussed earlier in this thread ("the rope trick") is approximately 8 ounces or 225 grams. Four small 1/4 inch "eye bolts" and two feet of light rope.

VB, do you have a picture of this?

No, I can make a drawing. However it is extremely simple. A short loop of rope connects the wing root rib to the side of the fuselage between the front and rear spars. This allows you to remove the front and rear spar bolts, allowinig the wing to hang close to the fuselage. Then you can walk out to the tip, rotate the wing (leading edge upward or downward), then walk the wing tip around next to the vertical fin.

Just like for a sailplane in a trailer, once the wings are in this position you must have so0me method of supporting the wings, securing them against damage, etc. etc. But the primary advantage of this rope device allows you to accomplish all of this yourself without requiring another person to be there, and that you can accomplish this without extensive modifications or engineering or machined fittings on the aircraft.

This idea started out as nothing more than a variation on the Kolb aircraft wing folding mechanism, which is very good. Kolb used a machined universal joint as the rear wing attach. This works very well but it requires the universal joint to be designed in to the structure. I thought other aircraft should be able to accomplish the same convenience without having to incorporate the universal joint into the main aircraft structure.

The rope attachment could be used at the leading edge, the wing midpoint, or the trailing edge. Its location would determine which direction the wing is "rotated", and how far forward or rearward the wing rests on the fuselage.

I must state that many other aircraft have used wing fold fittings long before this. If I did not mention it now, Matthew would be right here in a flash with a picture of the folded FRED It is entirely possible that someone else had the idea of using a cheap piece of rope instead of a universal joint, but perhaps that idea was mine first.

rtfm said:
The rope attachment could be used at the leading edge, the wing midpoint, or the trailing edge. Its location would determine which direction the wing is "rotated", and how far forward or rearward the wing rests on the fuselage.
Click to expand...

Center a "V" set of ropes with the vertex attached to the fuselage and the tips straddling the CG of the wing at the wing root? This way when you remove the last bolt the wing falls away from the fuselage, but doesn't want to immediately rotate in an uncontrolled way. The "V", being made of rope, still allows all of the universal joint features.

The outer part of the wing is sitting on a sawhorse, so it will not rotate.

And where do you stow that saw horse in the plane!?

Seriously, I was envisioning a single strut that stays attached at both ends. The saw horse should work well with a "V" strut that is removed from one end or the other.

The Kolb used a single strut too, and they routinely fold the wings without a sawhorse. There are videos on youtube that show this on the Firefly (twin strut), but the Firestar and Mark 3 can do it the same way if you needed to. They just put the wingtip down on the ground. So you could carry a pad, or a pillowcase to put the seat cushion in, and use the rope method without carrying a sawhorse if it were desirable. I believe Erkki is more concerned about folding the Ranger for storage in a trailer or an ISO container, so he could store the sawhorse or wing stand in that container easily along with the aircraft.

I'm trying to imagine where a cleverly placed, built in, hand hold (or two) would need to go to make the wing fold easier for one guy. I can see having to pull inboard on the wing to get the *root pins out.

*also, with the gas tank between the spar carry throughs in the overhead, finding a place to cut access holes for the root pins is going to need some head scratching...

When I folded the Kolb, it was not difficult at all to pull the front root pin. I made the root pins with a little handle at 90 degrees to grab. With the strut disconnected there was no outward force on the wing root. Rolling the fuselage fore and aft an inch (with the wing on the sawhorse) loosened up any resistance to the pin sliding out.

As much as I hate these little fiddly and cumbersome parts, a wing root gap cover strap with Velcro will solve the root pin access issue without interfering with the fuel tank.

FritzW said:
I'm trying to imagine where a cleverly placed, built in, hand hold (or two) would need to go to make the wing fold easier for one guy. I can see having to pull inboard on the wing to get the *root pins out.

*also, with the gas tank between the spar carry throughs in the overhead, finding a place to cut access holes for the root pins is going to need some head scratching...
Click to expand...

Is your 'thin patch' as big and bald as mine? It's the mark of a designer

Owing to the hassles of removing wings and finding a way to safely transport them, I really, really want to have folding wings in mine. I want it to be transportable on the back of my truck, so demountable wings would be a huge PITA.

The bigger the computer the more cooling it needs. ...people with a full head of hair are just a little "slow". ...at least I've been telling myself that since I was about 40 years old.

I think we all have different definitions of what a folding wing is.

Are we talking about AirBike style? (very easy, might as well be a piece of rope) 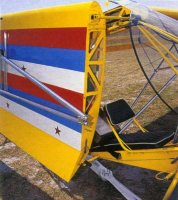 Or Aerotrek style? (a much bigger deal, would mean a whole new wing)

Both of the examples in post 736 are folding wings. IMHO so is the Grumman Avenger, and the Fairey Swordfish, the Corsair, and even the Backyard Flyer.

The rope method we have discussed has one or two big advantages even over and above cost and simplicity. The rope and/or Airbike method shown do not apply any loads on the flying harware, flying bolts, struts, etc. To me that is a big advantage, I really don't ilke the thought of fittings rotating and sawing back and forth on bolt shanks during folding, or the flying bolts carrying loads during storage. Also, the Dean Wilson method (Aerotrek photo in above post), as brilliant as it is, yields a larger size for the folded aircraft.

FritzW said:
The bigger the computer the more cooling it needs. ...people with a full head of hair are just a little "slow". ...at least I've been telling myself that since I was about 40 years old.

I think we all have different definitions of what a folding wing is.

Are we talking about AirBike style? (very easy, might as well be a piece of rope)
View attachment 85222


Or Aerotrek style? (a much bigger deal, would mean a whole new wing)
View attachment 85223
Click to expand...

40? So you were a late bloomer

I currently want to fold my wings like this:

A Grumman type angled hinge would do it. It keeps the folded width down, the undercarriage out at the break and the wings in a good postion for towing unenclosed or for compact storage. The hinge is fairly inboard, where the big structural bones are. Most of the cost other than build time will be reinforcing the wing to the hinge to take road loads.
My main issue with rope tricks and other ways to remove wings are having the wings remain securely attached to the rest of it. But if you come up with a good way to stow your wings for towing, I will happily steal the idea.
V

Dave Thatcher made a nice little external fold mechanism for his CX4. It adds no weight in flight (leave them at your trailer or hangar). It's a little hard to see in the picture below, but the fixture is shown in the center photo, top row below. A flange attaches to the wing stub (two bolts into the top of the spar cap) and has a square tube 12" long that projects outboard over the top of the spar. A second flange also bolts to the top of the spar, immediately outboard of the wing break, and it holds a square fitting that can pivot and that slides over the tubing.
After attaching the two pieces, walk out to the wingtip and pull the wing panel out until it reaches the end of the tube, then rotate the wing LE down and swing it back along the fuselage. The wings rest in a separate saddle that goes over the tailcone (or, they could lock into purpose-built pins somewhere on the tailcone).