billyvray said:
what was the type of airplane or what was it similar to?

How was the leaf spring used? Is it cut in half (and tapered, modified) and each piece clamped in the fuselage as and independent leg?"

The airplane was a single seat O65 continental powered tube frame aircraft, much like the Ranger in intended mission. I've flown a Bailey Dragonfly, and this thing was faster and slower. (The Dragonfly is far more capable) We used two springs, leaving one end uncut and incorporating the clamp type method to affix that to the aircraft. The wheel end was cut to length and an axle was welded to a mounting plate and a steel sandwich held it in place at the correct angle. It was easy to work with. I got the idea from reading an article somewhere about the British MW series. I had read that they used a similar spring from--If I recall correctly--the Land Rover...research was a little more difficult back then (all hail Google) It was a $100 solution that worked well.
Click to expand...

[QUOTE="Victor Bravo, post: 472700, member: 32977"...
In terms of using a fiberglass gear, Billy Ray's idea (above) of clamping two springs onto the sides of the fuselage is probably a better idea than my comment above about a monolithic one-piece spring. If the clamp bolts go all the way through the fuselage, at least there would not be any tension loads trying to "peel" the fuse...[/QUOTE]

Yep. Since we were welding tube, it was a simple mod to weld a pad in at the correct angle, and use lighter tubing in tension to prevent the spreading forces. The fuse was a straddle type as well, so narrow.

I had another Idea I will test; the use of compound bow limbs as tailwheel springs. They have a pretty good mounting system already incorporated, are available CHEAP in pairs at every pawn shop, and are available in different strengths. I have a feeling they will be a little light for all but a true 103, but it wont be hard to weld a fixture to a 2' trailer hitch tube, slide that in the truck receiver, and play with a forklift and scale and see where the two I have break. Fritz...do you know roughly how much load a bad taildragger pilot would put on a Ranger tailwheel spring? LOL

Once again, These aren't specific suggestions for The Ranger, just observations of what might be available on the cheap and reliable scale.
Last edited: May 15, 2019

18-20% of the aircraft gross weight, multiplied by a 2G impact, is a good conservative starting point for the tail spring on a very light aircraft like this.

As a "thumb in front of eyeball" guess, if you can have the tail spring 12 inches long (from the fuselage mount to where the tailwheel bolts on) and the spring flexes up four or five inches under that amount of load, that's probably a conservative safe "soft" amount of impact absorption on the tail. Lots of E-AB airplanes have less than that, but the Ranger is intentionally a 'knock around" off-road machine where you really don't want to break any of the structure and get stuck out in Rattlesnake Gulch.

Great idea about the compound bow... even if you had to glue two of the bow limbs together it may be a good cheap soft tail spring
1

Victor Bravo said:
I made up a sketch of a composite gear but I can't figure out how to upload it into a post.... what happened?
Click to expand...

Use the "Upload a File" button on the bottom right of the post editor.

Fritz, folding wings, is this an option on the Ranger?

Do you have a picture of it with the wings folded?

The wings are going to use VB's "rope trick". I'll take a day off from working on the gear drawings to mock a drawing with the wings stowed.
D

Hmmmmm....there already was a great thread on this forum that
I was not aware of, with contributions by Mr. Whitaker himself regarding his use of these very inexpensive landing gear springs. https://www.homebuiltairplanes.com/forums/threads/fiberglass-automotive-leaf-springs.21590/page-2

VB, I had thought of a similar landing gear scheme for a different skinny plane I drew up but had aluminum in mind. I like how your composite legs use a single wooden mold for both. I haven’t done the math but I kind of worry about the concentration of loads on the attachments for that landing gear, especially the lowermost fuselage bolts in tension. How do you figure they would be best attached?

Four AN6 size bolts. Thousands of pounds in tensile strength in the bottom two alone.

What structure inside the fuselage can handle the massive shear loads that four AN-6 bolts can transfer? What good are big bolts if the structure your bolting to can't handle the same loads?

The highest bending loads would be at the lower bolt holes not the place where you show the thicker cross section.

My assumption was that the structure would be able to handle the landing loads regardless of how the gear was designed. A one piece gear would put large compression loads on the bottom of the fuselage. A bungee gear would put large loads in to the fuselage some other way. No matter what kind of gear you use, there's some large load that you need fuselage structure to deal with. The bolts can go through the gear legs at the thickest point.

I'd rather make a single piece glass spring for both sides. Fuselage loads are lower and a bit less complex then.
Big tyres are light weight springing and will reduce the amount of leg springing required. Kitfox tires might be about right and somewhat cheaper than real tundra tires. What tires did you eventually use, VB?
ATVs may have something suitable.

Victor Bravo said:
My assumption was that the structure would be able to handle the landing loads regardless of how the gear was designed.
Click to expand...

I'm not picking on the idea, I'm just wondering how it works.

Alternately, thick wooden triangular skin doublers (that also tie in to the bulkheads) with Micarta bushings bonded in the holes. The landing gear through-studs would go across through these bushings, threaded on both sides (like cylinder thru-bolts on a Continental O-200). Nuts would be installed on BOTH sides of the Micarta bushings (inside the fuselage, and then outside nuts that clamp the gear legs), so the clamping force on the gear legs would not be transmitted into squeezing the fuselage sides together. The thru-studs could also be held to the bulkheads using pillow blocks or strap clamps to assist in load transfer.

Alternately, a thin wall light weight 4130 tube could be permanently built in to the fuselage using the methods above, with a 2 inch long thick wall tube doubler welded on to either end. Thread the thick wall doubler for AN6 bolt threads, leaving you with essentially a set of threaded anchors in the fuselage that also provides a structural tension member running across the fuselage.

This seems like a lot of extra complication than a single C spring with 2 hardpoints on fuseslage corners. Once someone has built the mould, springs will be fairly easy to churn out. Possibly for your buddies in exchange for bits that they have tooled to churn out.

The C spring is all well and good except for the fact that the Ranger fuselage is very narrow. A spring on the bottom of a narrow fuselage like this will try to rock (on the roll axis of the aircraft... "Rock 'n Roll!!!"), and it will have a lot of mechanical advantage. If the fuselage is 8 inches wide, and the wheel is 32 inches away from the fuselage corner, you'd have a 4 to 1 ratio lever trying to pull the anchor blocks out of the other side of the fuselage.

Victor Bravo said:
you'd have a 4 to 1 ratio lever trying to pull the anchor blocks out of the other side of the fuselage.
Click to expand...

If he uses a one piece gear that is bolted to the corners of the fuselage, and the airplane comes down hard on one wheel, I can assure you that it will try to "crowbar" the other side hold-down bolts out of the fuselage floor for a moment, until the other tire comes down. The mass inertia of the aircraft is worsening this problem, because the airplane doesn't want to move fast enough to put the other wheel down before the crowbar force is applied.

This is a really rough sketch of the "crowbar" load. 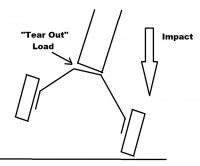