This thread is intended to be a place for discussion, details, and design renderings specifically focused on FritzW's neat little concept for the Ranger. This is intended as a a spin-off from Erkki67's thread (for re-inventing or re-designing the Affordaplane concept to reflect more traditional design and structural practices, and creating an aircraft suitable for larger/heavier pilots).

The Ranger concept has generated a large amount of interest, primarily because of Frtiz' beautiful renderings and innovative construction techniques. It seems to have resonated with a large number of HBA participants. So the focus of this thread is on that layout and aerodynamic concept that thas emerged from the re-invented Affordaplane thread.

With all sincere respect for everyone involved, this thread is not intended to introduce different layouts, pusher vs. tractor discussion, two-place versions, or enclosed cabin versions. Those discussions should be entertained on OTHER threads that are not focused on the Ranger. The discussions on how best to re-design or update the Affordaplane itself should (in my opinion) take place on that original thread.

Discussions about whether the Ranger should be wood or metal, or whether it should or should not meet Part 103, what type of landing gear, etc. are fair game for this thread.

Discussions about whether it should be a canard, or a biplane, are not for this thread IMHO.

With permission and participation from Fritz, Erkki67, the HBA moderators, and the active participants on the previous A-plane thread, my hope is that a thread dedicated specifically and only to the Ranger will help move this really promising design forward to the point where the design can more or less become real.
Last edited: Feb 19, 2019

Fritz, what are the plywood qualities you are calculating with, Gabon nautical plywood or birch plywood, and if one of those, which thicknesses and sizes are you using?

And second, is there any space available to install the controls on the tail-boom instead of in?

Not to be confused with the Vashion Ranger. https://vashonaircraft.com/ranger.php

Sheetmetal versus Wood and some aluminium.

BJC said:
Not to be confused with the Vashion Ranger. https://vashonaircraft.com/ranger.php
Click to expand...

Yes, I think it's preferable to confuse it with the Carl Goldberg Ranger: 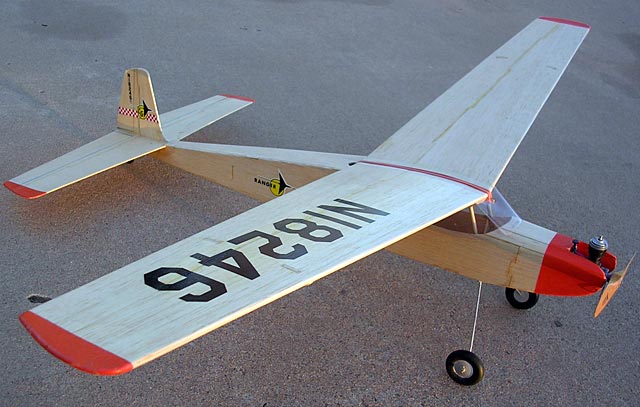 
A quick re-cap since it's a new thread... (there's lot's more info on the idea starting on page 6 of the A-Plane thread)

The Ranger is a mixture of Hovey's Beta Bird and an idea I have for a part 103 fun flyer called the CE.

Here's where it's at as of this morning, only about 10% done. But in fairness to me the idea is only 11 days old.


...hopefully I'll get a chance to work on it tonight.

Is a folding wing a part of the plan?

FritzW said:
Good idea VB, thanks.
<and my thanks as well! Percy in NW FL>


...hopefully I'll get a chance to work on it tonight.
Click to expand...

FritzW said:
only about 10% done. But in fairness to me the idea is only 11 days old.
Click to expand...

So at the current rate, then...

*Carefully marks May 29th on the calendar*

This is what I understand under the therm of aviation and freedom.

erkki67, let's just get you in the air first with one of them, and then with Fritz' help we can find a way to go from "satisfaction" to "gluttony" by providing you with two airplanes

Fritz, have you determined whether it will be possible for the Ranger to meet Part 103 and still have enough structural reserve for erkki67 (or you and me) to fly safely in turbulent mountain air? I'm guessing that's a tall order, especially with the Briggs engine on the renderings.

So far all the ply is 1/8" and 1/16" Birch (or Mahogany) a/c ply. The elevator push/pull tube will go through the boom, the rudder cables will go on the outside go the tube and it'll be wood instead of sheet metal.

...the latest idea (not set in stone) for gear/strut attach. It'd be light weight and very easy to make. A heavy duty rod end bearing with Carlson struts like the Ultra Pup. The gear could be 7075 or CF. I sent Grove an RFQ using their neat little form. ...I hate to think what the quote is going to be.

The two obvious questions: What about the plates buckling in compression (negative G)? And what happens if you tear the gear off?

Neither plate has room to fail in buckling. The bend in the top plate backs up against the lower longeron and the bottom plate against the flat surface on the gear. The plates can't "rack" because they're clamped to the flats on the ball in the rod end bearing.

And, ...lot's of airplanes rely on the landing gear to secure the wings, it doesn't seem to be a problem.

If going for part 103, it might be possible to shave off a bit of weight by making a tapered boom. Also, perhaps, of a less dense material? I'll admit I haven't worked out the numbers, but unless you were to put in some sort of stringers, hoops, etc. my guess is that the tube would fail in buckling. Some amateur boat builders have been making tapered, hollow masts from staves of wood. It seems common enough that maybe it's not too hard to do. All the pieces are identical.

I figured out that the tube would weigh something like 3/4 lbs/ft, but that might add up on a part 103 ultralight. It would of course be nifty to have one long component to attach everything to.

The sticks in Spruce, what dimensions or sections do they have!

Erkki, before you purchase anything I would suggest that you wait until the design is done and ready, because I believe Fritz is designing this with "tab and slot" construction for the parts to fit together easily.

If I am correct, this means the parts will need to be cut on a CNC machine. Unless Fritz wishes to send you the final CNC cutting digital files, the plywood pieces will likely need to be cut here on Fritz' CNC mahcine.

I do not know what his plans are for the cutting files, and I cannot speak for him, but my point is that you should have a complete understanding of how he wants to proceed before you purchase any wood or materials.
You must log in or register to reply here.
Share:
Facebook Twitter Reddit Pinterest Tumblr WhatsApp Email Link