The Pipe Cub according to "The History Guy"

BILL: REALLY enjoyed that interlude. Thanks for posting
C

Neat video!
For funsies: how many aircraft that are not J-3/L4's can you identify in the video? The B-17s don't count!

challenger_II said:
Neat video!
For funsies: how many aircraft that are not J-3/L4's can you identify in the video? The B-17s don't count!
Click to expand...

Aside from the Storch which was identified by the narrator, I saw what I believe was a Stinson L-5. There was also the Taylor E-2.
Last edited: Jun 28, 2022
C

He did start using Grasshopper when he needed to be general. There was a L4 at my airport. They didn’t know it was until they recovered it and saw the hidden extras. They went back as L4 but the colors were not very correct.
C

Oh, I wasn't disputing his using other aircraft videos. My question was thrown out to see how many could be identified. It's all in good fun.

TFF said:
There was a L4 at my airport. They didn’t know it was until they recovered it and saw the hidden extras. They went back as L4 but the colors were not very correct.
Click to expand...

I flew a CAP L-4, owned by the USAF, when I was a kid. It was in silver, with black stenciling. No other color.

Quite a few people in this area (Twin Tiers) still remember Bill Piper or worked at the factory before the flood.
My shirt tail was clipped at Doersom/Gettysburg. Just off Ike's farm and where his Commander sometimes landed.
Here's our (club) prewar J3. 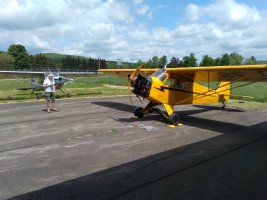 This one was light grey on the bottom and olive green on top. Not olive drab, but martini olive. Shiny too. Looked like a cartoon.

My first boss re-enlisted for Korea. He was not a pilot during WW2, he joined the Marines at 14 in 1942. No he didn’t look like he was 20, he looked like he was 12. But they didn’t send him overseas to Korea but did teach him to fly. He said his were just regular yellow Cubs. He said his favorite thing was to land on train cars and wave at the engineers.

Another friend got his first commercial flying job in a J3. Crop duster. Walked into a hangar and asked if there were any jobs. The answer was no. He asked about the Cub without the engine. The guy said if you put the engine back together, I will let you use it. Some time in the mid 50s.

I stored a Cub in my hanger for a friend for about 15 years. I was a CUB SPORT. Built in April 19th, 1939. Came from the factory with a 50 HP Franklin engine on the data plate but had a 65 Hp Lyc. J-3 not on data plate. Three piece windshield, tail skid, 1937 Plymouth hyd brake cylinders on the outside of the bottom of the fuselage. Box on the front lower firewall for the front rudder pedals. Control surfaces had 2 hinges instead of the latter 3. Rear D window sewed into the fabric instead of a metal frame. Different engine cowl from the J-3.

Almost every one has been converted to A-65s. It’s just a logbook entry. My friend, of the crop dusting Cub, use to have multiple Lycoming O-145s in his hangar from doing these over the years. There are still a couple in his hangar. One of my favorite Cubs is the TG-8 glider. At Oshkosh they had some a couple of years ago, one real one and two reproductions. Almost all of those were sold as J-3s after the war. The pilot seat where the engine would normally go is bolted on where the engine mount goes. First thing I looked for when I looked in the cockpit. Not a 20 minute job, but some out there are flying with a Cub glider and dont know it.

The Cub Sport can't be converted to a Cont A-65 without a lot of mods. The front rudder pedals are attached to the front lower firewall tube . There is a sheet metal box that is on the lower front firewall for the forward travel of your feet on the rudder pedals. No place for the fuel strainer and no space for the muffler on the C-A-65, and the 1937 Plymouth master cylinders would have to changed to a difference place. The cowl is also completely different. The Cub Sport is more of the J-2 than a J-3. The landing gear is also different.
This is the only Cub that I have seen like this. Data plate says "Piper Cub Sport" Not J-2 or J-3.
Can' believe this is the only pictures of it.. I cut the fabric off the bottom of the fuselage to inspect the tubes. Everything like new. Made new elevator and rudder cables and replaced the fabric. Was sold to someone in Alabama several years ago.
I also stored a 1943 L-4 Cub at the same time for the owner of both airplanes.

And you win the Rubber cigar, yes say more L-5's than L-4s
P

Pops said:
The Cub Sport can't be converted to a Cont A-65 without a lot of mods.
I also stored a 1943 L-4 Cub at the same time for the owner of both airplanes.
Click to expand...

All I can say about that is I would REALLY like to hang around your hangar for a few weeks!!!
T

So... a Piper Cub forced a Fieshler Storch to the ground, the pilot / observer using their .45ACP.
Quite a feat considering the Fi156 carries a MG15 machine-gun.
T