Vigilant1 said:
Lots of composite planes fly around with conveniently blunt TEs, even planes where a lot of attention has been paid to drag reduction. As a practical matter, I don't think you'd see a difference in performance.
Click to expand...

Somewhere long ago I read a report on sharp trailing edge vs rounded. Since then I've always tried to get a nice sharp/squared off trailing edge. Reason being kind of an unpredictable reverse Gurney flap effect for the rounded trailing edge. IIRC the paper didn't note much difference in drag, just a small change in lift coefficient.
I think a nice sharp/square edge is easier to build to look straight....especially on moldless composite.
M

Actually a radiused corner will help a crooked "straight edge" look straight. I used to do this stuff for a living.

Rounded trailing edges are not ideal from a drag perspective. Sometimes the practicalities of material fabrication dictate otherwise.

Today I cut the rib "cradle" jig. The ribs rest in this cradle perfectly spaced and aligned. The spar caps (19mm x 19mm Hoop Pine) are then slid into the recesses in the ribs. There is a second cradle jig, so that I can turn the ribs upside-down and bond in the top spar caps.

In the photo below, you can see:
I think this wing is going to be as strong as a brick **** house. I'm aiming for 6G (though in a Flea, this is never going to happen).

One of the nice things about a Flea wing is that is can be built in sections. My wing has three sections: the inner section (what you can see here), a middle section (which will fold upwards as per standard Flea doctrine, and a third outer panel, which will fold downwards. This gives me 5.75m span (on the rear wing) with an aspect ratio of almost 7 which is more than almost all Fleas.

Hi again. After considering the feedback from this group, I redesigned the wing completely. Here are the results.

After a rather disastrous laptop infection by a virus which encrypted every file on my backup drive (thank goodness it wasn't my C drive) I finally found time to get back into the workshop and progress my wing.

My wings are constructed in three panels on each side. Each panel hinges. Panel A is fixed, Panel B hinges upwards, and panels C/D hinges downwards, allowing the entire rear wing (5.75m span) to fold into a 2m wide "concertina" 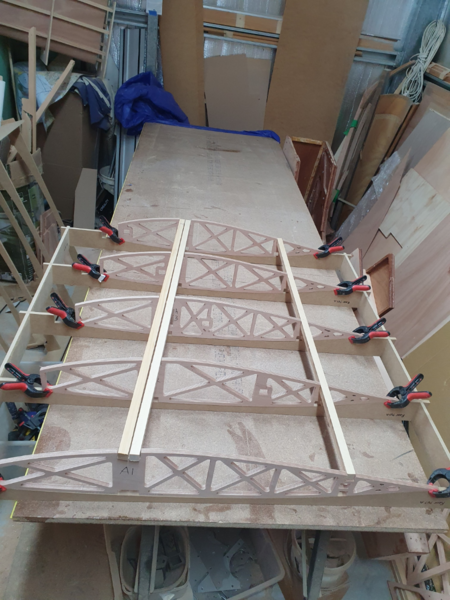 This is Panel A. Each rib sits in a cradle, ensuring there is no twist, the ribs are perfectly spaced and sit at 90 deg.

The main spar consists of two 19mm x 19mm Hoop Pine spar caps, with a 4mm gap between them. This is to allow space for the (discontinuous) shear webs to be bonded in place between them. 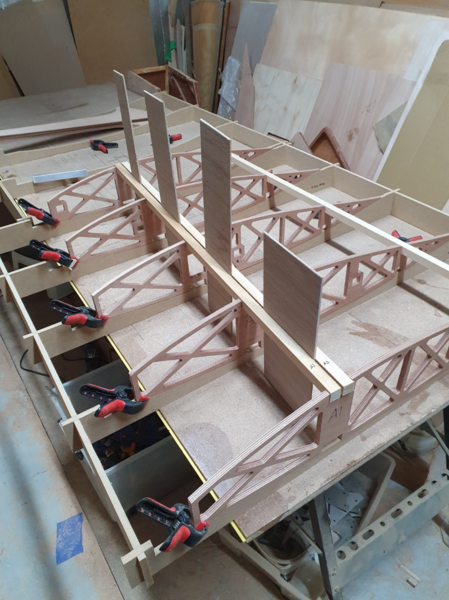 I know this is somewhat unusual - to have a discontinuous shear web - but this has been shown to work with 30mm wide foam ribs, so the 9mm gap between each shear web segment will be more than OK.

Here's a close-up of the spar caps. 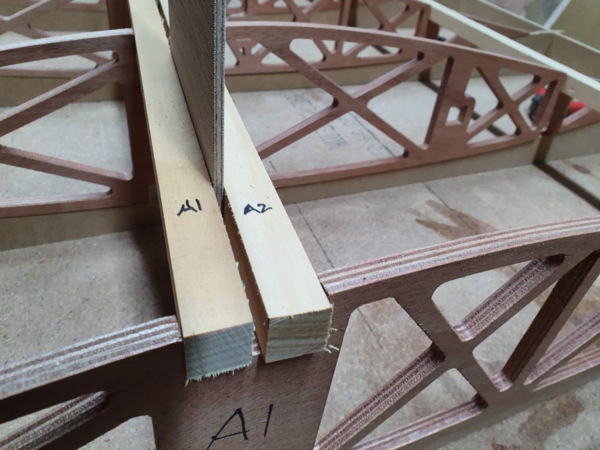 Using West System with some adhesive filler, I bonded the spars in place on both panel A and panel B. Once satisfied that everything was true, and that every rib was at 90 deg, I weighed the spar caps down with my trusty bricks. 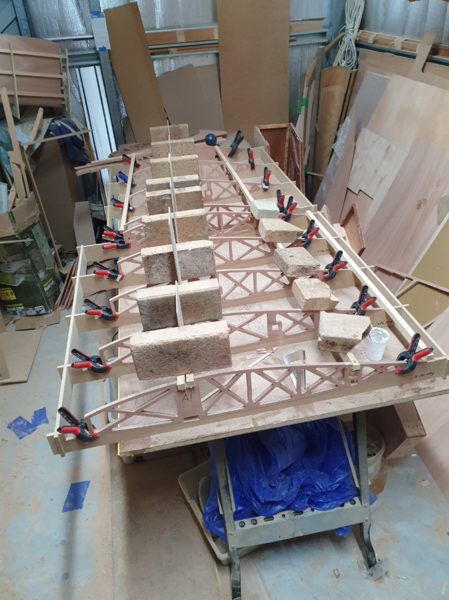 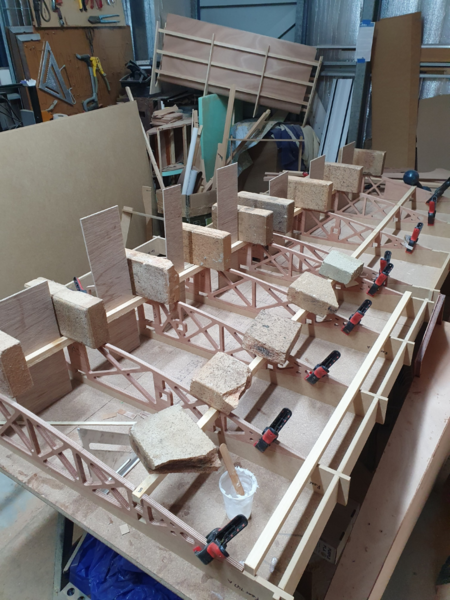 By tomorrow morning, I should be able to flip the two panels, and bond the bottom spar caps in place. If I get an early start (and if it's not too cold) I might be able to start sanding the spar caps to the contours of the ribs.

No misunderstanding. The fit isn't extremely tight. The shear webs slip in "relatively" easy - at least easy enough for a good coating on all surfaces with neat West System.

Hi,
Things have gone silent on my end - some minor medical issues, but mostly a lot of head-scratching over the design of the wings. I had NO IDEA how difficult designing a wing would be. And a Flea wing especially, because it is made up of separate panels, with hinges. Sourcing the correct hinges has been a nightmare - I'm off to eyeball some more this morning. (Naturally), I opted for a swept wing rather than a rectangular one, so first I had to calculate the centre of pressure before I could position the spar to which the pivot is attached, and then I had to update the spreadsheet to find the optimum CG.

That done, I had to calculate the size of each rib, and the position of the cut-outs for the two spars. Cutting the ribs was easy, of course. Next up was cutting the cradles for each of the wing sections, so that the ribs would be perfectly spaced, and vertical, with the required 4 deg dihedral.

I trial fitted everything, and when satisfied that it all fitted together nicely, bonded the spar caps (blue in the screenshot above). I checked that the trailing edge (4mm glass fibre rod) was straight (it was). I then threaded the 16mm Tassie Oak dowel for the leading edge. Also straight, and a nice fit. I then bonded the LE in.

Next job is to bond in the shear webs. They are already cut, so it will be just a matter of slapping on the West System epoxy, and clamping. By this time, the wing should be pretty rigid.

I also had to design the wing attachment hardware. The rear wing consists of two halves, separated by the width of the aft fuselage (about 135mm). The inner rib is reinforced, and bolted to a metal attachment on the fuselage. The outer attach point is at the first hinge point. This hardware has been drawn, but not cut yet.

Next came the drawing of the wing sheeting. Not as easy as it might sound because of the swept wing. But I've completed that now also. The rear wing will require three full sheets of 1.5mm ply.

As you can see - a lot of time at the computer.

So much for the wing.

I have decided that placing the gas tank in front of the firewall - while convenient, because I could use a regular 20 litre gas tank from the local hardware store and some fittings from boat shops, this is a terrible position not only because of the proximity to the hot engine, but also in terms of the change in CG as the gas gets used. So I've moved it to inside the fuselage directly on the CG.

The grey area inside the fuselage in the screenshot above is the new position for the gas tank, with a filler cap jutting through the side just under the pilot's knees, out of the way. About 18 litres (about three hours flight time). I'll have to fabricate it. I thought of plywood sealed with vinylester, but it strikes me that I have a whole box of 3D Core foam, which looks like this:

Extremely light, very easy to cut on the router, and simple to laminate with a layer or two of glassfibre. I'll prototype the tank out of Bunnings plywood.

So that's what I've been up to since last time I wrote.

Side view showing new gas tank location inside fuselage directly on the CG: 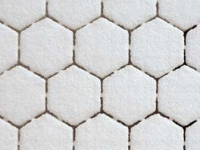 Question:
I had planned for my undercarriage to be three rigid pieces with no spring involved, trusting the 18 inch tundra tyres to provide the damping.

First, is this a workable idea, or do I need to provide some sort of damping in the structure as well?

Secondly, is it a viable idea to make the structure out of plywood? I am presently cutting a streamlined strut (35mm chord, 50mm thickness) at the moment - just to see how it turns out. The airfoil is one of the Selig symmetrical airfoils with plenty of meat in it.

rtfm said:
Question:
I had planned for my undercarriage to be three rigid pieces with no spring involved, trusting the 18 inch tundra tyres to provide the damping.

First, is this a workable idea, or do I need to provide some sort of damping in the structure as well?
Click to expand...

For an airplane this light, it's probably "workable," but you'll enjoy flying it more with a sprung-and-damped landing gear. Side-to-side tire scrubbing from the gear geometry is usually enough damping for something this light.


rtfm said:
Secondly, is it a viable idea to make the structure out of plywood? I am presently cutting a streamlined 50mm strut at the moment - just to see how it turns out. The airfoil is one of the Selig symmetrical airfoils with plenty of meat in it.

Do the math. Eyeballing these things leads to a structure being either too weak or too heavy, or both.

Here's your resource. As inexpensive as "free" if you put the Kindle app on your phone or tablet. Outstanding book that will answer all your landing gear questions. There isn't a volume two. He died before it was published.

You should ask Selig about it.

Hi again,
Returning to the dampening of the main gear. Would this work? Pretty cost-effective, and plenty rugged. Travel: 50mm - 70mm, max load (each) 225kg (larger are available, of course). 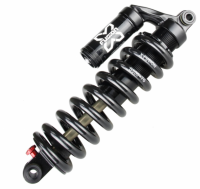 rtfm said:
Hi again,
Returning to the dampening of the main gear. Would this work? ...
Click to expand...

Does your worst-case landing load, with that gear geometry, generate 225kg on at least one of the struts? You need to know that to design your gear anyway, and definitely need to know it in order to answer the question, "Would this work?"

Hi Topaz,
I was thinking more of the concept than the sizing. I am looking into landing G loads at the moment.

Okay, fair enough. Note that there's a pivot joint on each end of the item, so it's not likely to be able to take much in the way of bending loads even if you managed to fix one end to the strut (and you probably shouldn't put bending loads on it therefore). I think you'd want to provide some separate mechanism that restrains the motion of the pins to a linear one along the axis of the item, so that it doesn't simply swing out of the way when a load is applied. That was a long-winded way to say, "What keeps the upper link on this gear straight when a load is applied?"

This is what I was worried about also, but you put it far more clearly than my muddled and circular reasoning. Front shocks might be the answer...

You can run a single strut cross combo left & right,
but it will have use the constrained motion design,
So it does not have to locate the joint under stress.

For your consideration, Duncan:

I would say that an aircraft of the fleabike weight with large balloon tires, the suspension is completely unnecessary. There is no suspension on the Minimax and Himax and they seem to be OK, the CH701 has very limited suspension as did the VP1 and the Bowers Flybaby. As one of the members said if it isn’t there, it costs nothing, weighs nothing and is 100% reliable.
You must log in or register to reply here.
Share:
Facebook Twitter Reddit Pinterest Tumblr WhatsApp Email Link