If the random/unaligned plywood grain direction is unsat for wing ribs, why is it okay for the fuselage frame? Because of the thin plywood outer skin?
Last edited: Jun 16, 2021

My idea was just sticks in the diagonals, not an entire stick rib glued to an entire plywood rib.
V

Victor Bravo said:
My idea was just sticks in the diagonals, not an entire stick rib glued to an entire plywood rib.
Click to expand...

My Gipsy Moth has router-cut plywood ribs with spruce cap strips as did all US-production Moths. I believe plywood ribs are used in a lot of other homebuilts including some Pitts Specials (though I hear those don’t hold up well to vigorous aerobatics). Could you guys be trying to solve a non-problem?

Vigilant1 said:
If the random/unaligned plywood grain direction is unsat for wing ribs, why is it okay for the fuselage frame? Because of the thin plywood outer skin?
Click to expand...

The difference is shear vs. axial loading. Plywood is great in shear applications but not when axially loaded (as a column).

In the fuselage below, the plywood "truss" is functioning more as a one-piece set of panel stiffeners (for the exterior plywood skin) than as an actual truss, although its shape resembles a truss. I don't know the actual analysis numbers, but conceptually it's OK (at a high level; I don't remember what the current fuselage design looks like). The top and bottom chords of the fuselage frame may be carrying a fair axial load (esp. where the distance between them is narrowest) but this could be accounted for by making the frame members wider or adding doublers in critical areas.

Turning to the ribs next, a truss has all of the members loaded axially. A narrow strip of plywood may or may not be up to the loads imposed on it when playing this role (and is sub-optimal from a strength-to-weight perspective because comparatively little of the grain, if any, is parallel to the load). A plywood shear web, on the other hand, can have holes (up to a point) but in that case it is performing as a shear member, not as an axially-loaded member. The rib design should at least be load tested if not analyzed and maybe reconsidered. It may also be advantageous to consider capstrips so that there is adequate long-grain area available for gluing on the wing skins.

NACA TR 345 is the definitive source on this subject.

I find the Kitfox ribs (posted by @cluttonfred in another thread on stick-vs-ply) pretty interesting as an approach to an all-plywood, easy-to-assemble approach.

Yep. Recall that Duncan's spar cap is continuous and that the one-piece ribs have notches for the spar. The lift reaction between the rib and the spar should be considered. One way to handle this would be an intercostal (or a pair at either side) at the intersection of the rib and shear web.

Any torsion along the span axis would be carried by the ply skin, but the ribs are acting as stiffeners to this torsion box, and bonding capacity here (rib to skin) should be considered as mentioned above (although I think VPs may have gotten away without a capstrip).

Day 7:
It has been 12 days since I've done any physical construction on the Fleabike. Those 12 days have been taken up by drawing and cutting five of the external bulkheads FOUR times till I was happy with the fit. With a plane which fits together like a puzzle, each piece has to be perfect, or it just doesn't work. Fortunately now the pieces all fit together perfectly, and the process is repeatable. For me, that's a big thing.

This is the cowl base bulkhead in a trial fitting. 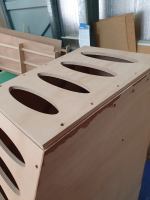 And this is a shot of the cowl base, both control panels (I'll be using a big iPad on the top for my OzRunways moving map/EFB, and a small iPad for the digital engine readouts, and all the other things - see below. Both will be velcro'd on, and both fit very neatly.) 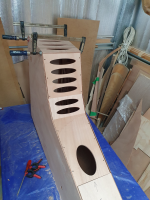 Below, a nice shot of the belly, with the "signature" RTFM concave aft section. 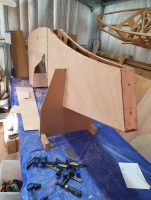 One of the issues I faced was keeping the epoxy off surfaces which later needed to be bonded. Epoxy just doesn't stick that well to epoxy - so it needs to be sanded in order to provide a mechanical bond. 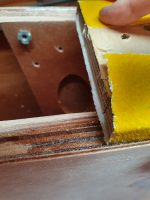 First step: bond the front section of the belly, weighted down with my trusty bricks... 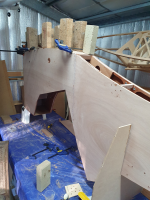 Then the aft section. This was an early morning, late evening job to give the epoxy sufficient time to cure so that I could remove the bricks. It is frustrating waiting for epoxy to cure, but it did give me time to do the CAD stuff and work on the router. I fastened the belly down with wood screws, and weighted down the edges in-between with the bricks. 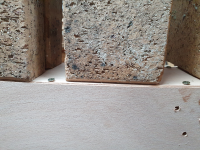 Then I spent a couple of days replacing the base and the spoilboard on my router. It would have taken a matter of hours with a helping hand, but on my own, two days. Lots of bending under the router and crawling on my knees. But she's done now.

Progress on the design:
I have FINALLY settled on a wing design (a simple taper with upturned tips), and yesterday I cut half the ribs. I have business in town today, so I might not get to cutting the other half. But I'm going to try. In any event, I'll show some photos of all 24 ribs tomorrow.

I also decided against a single mast (like the Croses design) in favour of the more traditional inverted "V" design for the masts. And I finally also decided against adding ailerons to the central section of the wings. The wings, by the way, have three panels each. The outer panel folds down, and then the inner panel folds upwards, giving me just over 2m folded width on the rear wing, but a full 5.75m span (just shy of 19ft)

You might be able to find a buttoncap screw,
So you can sinch down without crushing fibre.

It's all done now. The screws were little more than finger tight, anyway. They will be removed and the 3mm holes filled.

Today I cut all the ribs for the rear wing. Quite a pleasant job. Every rib is different, because the wing plan is tapered. 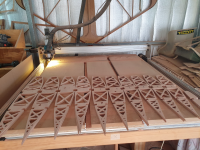 Ribs are from 9mm Gaboon ply on a "X" pattern 10mm wide. This evening I used a roller to coat one side of the ribs with a thin coating of West System applied with a roller.

How will the trailing edge be attached?

So what's the weight of the biggest and the smallest ribs? Or of all them ?
To compare with tried-and-true full foam ribs (airex like gaz'aile, SD1 or MC-100 or XPS with plywood/fiberglass capstrip like on the pou-guide site or for the MAG-01: LES AILES)

sming said:
So what's the weight of the biggest and the smallest ribs? Or of all them ?
To compare with tried-and-true full foam ribs (airex like gaz'aile, SD1 or MC-100 or XPS with plywood/fiberglass capstrip like on the pou-guide site or for the MAG-01: LES AILES)
Click to expand...

I'll weigh them this morning and report back.
The problem with foam ribs is that my shear webs are not continuous. 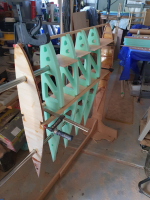 I started out using 30mm Airex with ply ribs at strategic locations, but the caution was raised here on the forum that there might be significant stress on the spar because of this. However, mcrae0104 (post #443) did the fancy calculations for me and concluded that it would be OK. I decided to err on the side of caution, however, and reduced the 30mm gap to 9mm

Also, I don't need capstrips, because I'm not covering the wings with fabric - which would require capstrips. I'm covering the entire wing with 1.5mm ply - so I have a humungus capstrip, in effect.

BJC said:
How will the trailing edge be attached?

Trailing edges are 4mm glass fibre rods. This is the best idea I could come up with, and I "just happen" to have miles of the stuff in my workshop from a previous project. I'll grind off the pointy ends of the TE so that the rods fit, and then bond them in place. For some reason, the CNC didn't cut the tips off for me (I must look into that for the front wing). The rods are very stiff. The top and bottom skins then bond to this and continue till they meet a bit further out.

From what I recall, wind tunnel tests indicate that with a slightly blunt trailing edge (radius about 1% of the chord length or less), the wing has the same performance (lift / drag) as a sharp TE. I'll look around for some NACA reports on this later. It might allow you to make a simpler and stronger TE. Those thin plywood veneers are not going to like forming that pointed edge, to say nothing of what you'll say the first time your head hits it during an inspection.
Last edited: Jun 29, 2021

With the foam ribs you are relying on the compressive strength, foam has so little tensile strength that I would make the shear web continuous and make the foam ribs in three pieces and glue them to the spar, the ply caps will transfer the load around the spar.
The truss cutouts in the foam ribs weaken the ribs, the weight saving is so small compared with the loss of strength - think of the foam as a core, it only keeps the top and bottom skins from buckling.
Last edited: Jun 29, 2021

I had the same reaction as Vigilant1. There is no need to have a trailing edge smaller than 4mm, I'd just cut off the foam rib and ply skin where about 5mm thick and then epoxy in your 4mm fiberglass rod and use aircraft fabric, oratex, or even just a flexible cloth tap over that. Something like this....

Vigilant1 said:
From what I recall, wind tunnel tests indicate that with a slightly blunt trailing edge (radius about 1% of the chord length or less), the wing has the same performance (lift / drag) as a sharp TE. I'll look around for some NACA reports on this later. It might allow you to make a simpler and stronger TE. Those thin plywood veneers are not going to like forming that pointed edge, to say nothing of what you'll say the first time your head hits it during an inspection.
Click to expand...

Some leads, if you are interested:
1) This is and HBA post/thread from over a decade ago. Orion, Jan Carlsson, Norman, and Billski touch on the subject of thick trailing edges. Orion believed cutting off the last bit of TE flat could slightly reduce drag, Norman was not convinced. New Wing

Lots of composite planes fly around with conveniently blunt TEs, even planes where a lot of attention has been paid to drag reduction. As a practical matter, I don't think you'd see a difference in performance.

Thanks for the suggestions, guys. For practical purposes, I don't really think I'll try to taper the TE of the skins. A pain in the arse! I will in all probability just cut the skins off square. As Vigilant1 suggests, I won't be able to tell the difference. Especially on a slow-flying Flea.

sming said:
So what's the weight of the biggest and the smallest ribs? Or of all them ?
Click to expand...

Largest rib: 218g (by comparison, my stick-built rib of the same size for the Aeromax weighs 184g)
Smallest rib: 59g (this one is solid, because it is the outermost rib)
Total weight of all ribs (i.e. both sides): 3.6kg