Dana said:
I considered the first (as the recording device is inside the cockpit measuring the pressure there) but don't think that's it, as I'm only looking at the change in altitude; the actual altitude doesn't matter. Whatever variation or error there is should be relatively constant during each climb segment.
Click to expand...

But are you always starting and stopping at the same altitude? If not, then is the rate of climb the same at different altitudes? That would make a difference.

Also, at different AoA you could be getting some errors in your air speed caused by the pitot tube not being in line with the air flow.

Himat said:
Your last paragraph then make me question, how good is the airspeed calibration?

The solution is probably what Areowerx suggest, make enough tests and average. Computing both “instantaneous” and start to stop climb rate may give some information too.
A few more questions. How much difference is there in pressure and GPS altitude? Is GPS altitude good enough to have a check on pressure altitude?
Click to expand...

I checked the airspeed some time ago using the Gray method (fly a triangle at constant airspeed and compute TAS and windspeed from groundspeed and track) and it's close, maybe reading a bit low. But like the altitude during a constant speed run, it should be consistent, i.e. if it's indicating 65 it might be doing 67 but it's still 5 knots faster than when it's indicating 60 and actually doing 62.

GPS altitude is notoriously inaccurate. The GPS I was using uses the GPS to calibrate its internal pressure altimeter when it's first turned on (or I can do it manually); thereafter it records the pressure altitude.


Aerowerx said:
But are you always starting and stopping at the same altitude? If not, then is the rate of climb the same at different altitudes? That would make a difference.

Also, at different AoA you could be getting some errors in your air speed caused by the pitot tube not being in line with the air flow.
Click to expand...

There are no doubt minor variations in the start and stop altitudes, but not enough to have a significant effect on the rate of climb. And the numbers used by my trackreader program are matched pairs, so even if one climb started, say, at 980' and ended at 1995 and the next one was from 1100-2050 the displayed result is the actual altitude gain divided by the actual elapsed time.

And yes, the AOA is probably causing some inaccuracy, but the error should increase with increasing AOA and vice versa, so while it might change the precise curvature of the plot it shouldn't cause dips or reversals.


I played with the raw data a bit today, making a scatter plot of the instantaneous ROC vs. groundspeed, but it was useless.... I was seeing wide variations in both the speed and rate of climb from point to point (1 second interval) even when I used a running average. But while those variations are large on the small 1 second point to point scale, they aren't significant when using start/finish time and altitude, as can be seen from the straightness of the segments in the elevation profile in my first post.

Sigh, I guess the right way to do it, as others have suggested, is to repeat the test multiple times and average it out. But while I will no doubt make a few more tests, I'm not going to go crazy, each set takes about 45 minutes and I have many other demands on my time (including just flying around for fun!). But as for the propeller, I think the thing to do is to adjust the pitch to get the rpm where I want it, and let the climb and speed fall where they may.

One other thing... this kind of flying is exhausting! Concentrating on the instruments, trying to hold a constant airspeed, I have new respect for test pilots.

Just to have you feel better about the data you are getting, this is my climb/speed raw data: 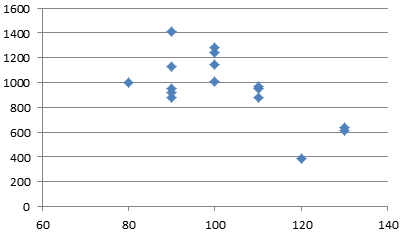 Your data is much better than this at least. Weights run from 1389-1454 lbs, temperatures from -10 to +27 C, altitudes from 5000-7910 MSL. Lots of correction factors to calculate out, and then did the least squares fit for a power available curve and drag curve.