Talos Avionics 50% off for Boxing Day!

I have no connection with this company but I do like the simplicity of their EFIS systems that include AHRS, pitot-static, and GPS to provide all your flight instruments and navigation in one little box connected to any tablet. They used to use wifi connections but now they only seem to offer the hard wired versions for reliability and lower power use.

They are currently having a 50% off "Boxing Day" sale so you could get their base Aeolus-Sense for under $500 and add a basic Android tablet on sale wherever you are and be in business with a pretty slick little EFIS setup for well under $700. If you happen to be looking for a basic EFIS, that's a heck of a deal. The site is https://www.talosavionics.com/. 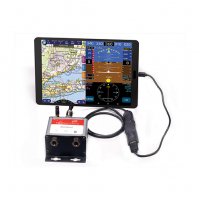 I don't like the fact that you have to hit the "Order" button to get a price. Turns me off big time.

Not sure where you're looking, I think they just have a simple site where you hit "order" to get to the shop part. Prices are clearly visible there: https://www.talosavionics.com/shop/

That's an amazing find! Thanks.

Yup, that's what I posted. If you click on "Products" you then have to click on "Read more" for a particular item to see the price (in red at the top). If you click on "Shop" from the home page then all the products and prices are listed right away. Like I said, I think it's a function of having a simple web site in which the "shop" function is separate from the rest of the site, typical of many small business sites.

If I click on "Products" and then "Read more" there is still NO price in red at the top. From there, I have to hit "order" to get a price.

But you are correct, if I click on "Shop" from the home page, then I get a price. Very poor web site. Should be completely upfront with the price everywhere.
Sort of " you have to vote for it before you know what is in it" type of thinking. I have been following this item for for quite a while and was thinking of ordering it for the JMR. Things like this puts a bad taste in my mouth. Lots of choices out there.

Maybe it's a question of your browser or OS, prices are there for me.

cluttonfred said:
Maybe it's a question of your browser or OS, prices are there for me.
Click to expand...

Its over my head.

Boy that's really slick ! One of the other versions, a little more money, has an ADS-B receiver too.

If she can swing it , it is too light

Never buy a marble rolling pin, the kitchen equivalent of a machine gun.

Hell hath no fury like a women scorned by a aircraft.
R

Does anyone here have direct experience with this company? I've just spent some time looking at their products, and I'm finding it a bit confusing to figure out the differences among the four products they offer, beyond the presence/absence of ADSB. Some descriptions say 'sensorless', some say pitot and static (and 'barometric sensor'), and all say 'AHRS' but none indicate whether they are true ADAHRS, using air data. I've also noticed that some pages show a price, and some don't, even for the same product. They really need to add a page showing all the products' features in column format, so it's obvious what we'd be buying or giving up.

I also noticed that yesterday the home page was offering 50% off, and today it's 25% off. And, while they tell us we get one year 'free' for the Horizon app, there's nothing on the website itself to tell us the cost of renewal. Had to spend some time searching for the company that makes the app to discover it's $69/yr in the USA, which seems a bit pricey when many other full featured aviation apps are free.

Wow, folks are pretty tough on this small company's web site considering it's clearly very simple and they are not native English speakers (it's a mom and pop operation from Greece). Their products page -- https://www.talosavionics.com/products/ -- includes a pretty clear comparison of their four current models.

They had a special "Boxing Day" one-day 50% off sale which is now over. If details on their site are unclear, what not point that out to them so they can improve it?

The company was new and their stand swamped with people when I went to Aero Friedrichshafen almost three years ago and seems to have grown and thrived since. I have no other personal experience.

Thanks for that. The 'products' page looks identical to the home page, unless you scroll completely past the four product images, so I didn't notice the comparison grid. I can understand the 'English as a 2nd language' issue; that's why I asked whether anyone had direct experience with them.

I've had their site bookmarked for quite a while, keeping their version of an 'AHRS box' idea in the running for building a cheap EFIS system. Wish I'd been more prepared to pull the trigger when I saw that 50% off banner....

About apps, I am not familiar with the Horizon one you mentioned. The Talos default used to be the A-EFIS app for iOS or Android, free in B&W and you had to pay to unlock the color, but that code was included free with a purchase. That may have changed, but as I understand it the Talos device is just providing a data feed and you can used any number of existing navigation or PFD apps.
R

Home page; scroll down to 'breaking news'. The Horizon app apparently adds nav & synthetic vision. I've had the TA app (basic efis + hsi) on my phone for a long time; obviously just for evaluation since I don't own their hardware.

edit: I'd still like to hear from anyone who has hands-on experience with these products. Many solid state 'efis' products that make these 'sensorless' claims, even some popular, high dollar brands, cannot handle some surprisingly mild-seeming maneuvers. Several years ago, there was one that would get the 'leans' if you flew a level, sustained, very shallow turn.
Last edited: Dec 28, 2019

I have been looking at the Talos for a while and when they had a 30% off Black Friday sale I was very tempted. Then they had a 25% off Christmas sale and I was annoyed at my self for vascillating.
Then on Boxing Day, my birthday, they announced 50% off. Well how could I not?
I see you guys discussing what is and isn't expensive; spare a thought for us here in Australia who have to add 50% to all the prices! And possibly another 10%gst when it arrives.
S

I have a talos sense pro in a test certified aircraft. plumbed it up to pitot static system for IAS as well. It has ADSB in and GPS (non WAAS). We actually installed it more as a permanent install as plane is VFR only during test phase. their website is a bit too simplistic, and their manual is anemic. its a Greek company and their teach support is by email Only, which is somewhat frustrating.

the unit works well as a AHRS except for getting magnetic heading which we could not. This was likely the Cessna aluminum airframe and it may work ok on a composite airframe. There is no external compass so we were forced to display GPS track info, which has its issues.

besides the 2 pitot static ports it has 2 SMA type antenna connectors, GPS and ADSB IN antenna. unit comes with small GPS antenna than tapes on to dash board. There are no external antennas available as it’s designed as a portable unit.
we use it to better display flight data on test flight videos, and it works well, except for seeing climb rates. It was small temp probe for OAT and can display TAS but not density alt, which would be nice....we had to install another gauge for DA.

the flight plan page is very rudimentary.....however it’s uses common wireless GDL90 Standard so it should interact with other apps like foreflight. They are partnered with a German company somewhat like ForeFlight called Helios glass cockpit but I haven’t tried it. I think that app cost $69/yr. It has own WiFi network that connects upto 5 devices, so we connect the IPAD (android works too) and my android phone......we actually use a USB cord to connect the iPad to it. It the iPad loses the signal from the box, it reverts to GPS derived data for altitude, speed and gyro info. However, it will not automatically swap over from wire connection to WiFi if wired connect is lost.....this is a big short coming I believe.

if you want a small sized portable AHRS that GPS track heading will be ok for you, and it’s on sale, it’s worth it if for nothing else but the GPS and ADSB. There’s another unit called I Levil that is similar.