In the canard wingroots and other places, we're running with IGUS Iglidur plastic bearings. Iglidur is available as stock bearings and plastic raw material. Its also availaible as 3d print filament.

In that application. I think Delrin would be just fine. I have a bunch of small pieces here that are getting smaller all the time as I make stuff. I recently fixed up a 1963 Johnson 10-horse outboard as a trolling motor for my boat, and had to do a bunch of repairs to the gearcase. The seals had been leaking so some crazy dude had stuffed it full or grease instead of the gear oil. The bottom end in that thing is all bushings, C93200 bronze and hardened steel. I could not find bronze at any machine shop anymore; seems that nobody makes such things anymore. In the 1980s I bought a lot of C93200 to make numerous types of bushings and bearings, hundreds of each part number. Fiddlesticks.

So I machined a new driveshaft bearing and a new propshaft thrust/forward bearing from Delrin and put them in, replaced the leaking seals, and filled the case with gear oil. Going fishing next week and those bearings will get a workout. I'll pull the case apart this winter and see how they did.

One of the compressor types we overhauled in the '80s used Delrin wrist pin bushings in the con rod. Those compressors that were naturally aspirated did fine with it, but the ones that had their intakes plumbed to the turbocharged engine intake did not. They wore out quickly, since the constant pressure on the piston prevented any oil entry to the pressure interface between the pin and bushing. We replaced them with C93200. It wasn't so much a wear issue; it was the deformation caused by the constant pressure and heat. Turbocharging compressors was the standard way of stopping oil pumping; when a compressor is unloaded, its intake valves are open and the air is just pumped back and forth between the two cylinders instead of being forced out the discharge valves and into the system. With no cylinder pressure, and little heat from compression, the piston would contract and start moving sideways a bit in the cylinder, pulling the rings off just enough to let oil past them, and that oil would accumulate on top of the pistons and get blown into the system when the compressor went back to work. Gummed everything up, and made a lot of carbon coking in the compressor head. Turboing it fixed that.

I'd use the Delrin for the rudder bar blocks and put a bar of steel or aluminum across the top, under the bolt heads. If the bearing fails the bar can't get away; it would just slop around some.

These are Cessna rudder bar bearing blocks. They're plastic and have been for 50 years, at least. Don't know what type, but nylon would be my guess. Maybe they're Delrin now. If a plastic block is good enough for a 185, I think it's good enough for a homebuilt. I never found one of these broken but I did find the light aluminum fuselage rib flanges they were bolted to cracked and broken. No metal plate over top, either. 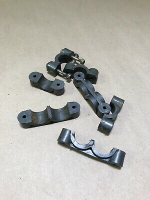 Thanks for the thoughts. It’s for a rudder pedal mount on a sonex.

I saw on the rv-12 the other day that it has delrin as the moun instead of phenolic, so that’s double reassuring

pehnolic doesn’t seem to be particularly good as a bearing surface. It feels pretty abrasive and leaves powdery residue everywhere!

Phenolic is urea-formaldehyde resin with a linen fabric reinforcement. Not only ancient technology, but that dust is also dangerous. You don't want to breathe it.

Steveastrouk said:
In the canard wingroots and other places, we're running with IGUS Iglidur plastic bearings. Iglidur is available as stock bearings and plastic raw material. Its also availaible as 3d print filament.
Click to expand...

In my day job (designing automated machinery) I use Igus "J" bearings a lot.
K

DaveD said:
I'm with Dana, Delrin is an excellent bearing material, I often use it for bushings.
Click to expand...

Even better, but I have NO IDEA where you can find it in "retail" quantities, is "Thordon". It comes in several grades, and in the marine trades it's driven out phenolic in anything greased or water lubricated or "dry running".
K

Oh, and a popular brand of phenolic/micarta was "Tufnol" <gratuitous "Spinal Tap" reference>

There are various grades and brand names for the different types. "Garolite" and "Yorolite" are two. The reinforcement can be paper, linen fabric, or fiberglass, and the binding resin may be urea-formaldehyde, rubber, epoxy, and no doubt others, all with different combinations of strength, temperature resistance, etc.
T

A 10% to 15% filled nylon 6 with moly is stronger and slipperier than most micarta grades and will cost about 25 bucks for enough material to make the blocks plus an extra.

If it were me, though, and it is not, I'd go with the IGUS suggestion given above and make the blocks out of whatever you find that is perhaps stronger than UHMW. Why? If it wears, the IGUS bearings are cheap and easy to replace...no fab required.
L

Dana, Yep! I've used oil impregnated Delrin in products and would be fine in this application. Much better than a bolt (into tube end) through a end bracket, like in some aircraft, but that does the job well enough for some designs.
George

SamP said:
Not sure if this is the best subforum, but here it goes!

I have a rudder pedal mount that I need to fabricate. The rudder pedal rotates between two peices bolted together. Plans call for fabricating it our of phenolic, but I want to use delrin instead because:
Would there be any concerns for this substitution? Thanks!
Click to expand...

"]
In the canard wingroots and other places, we're running with IGUS Iglidur plastic bearings. Iglidur is available as stock bearings and plastic raw material. Its also availaible as 3d print filament.
[/QUOTE]
I installed the IGUS wing/aileron root bearings in my LongEZ, EZ to install and smooth as butter. In my previous LongEZ the plans phenolic bearings were worn out at 500 hours. I made new Delrin bearings and 1,000 hours later when I sold it they hadn't worn a noticeable bit.

SamP said:
I have a rudder pedal mount that I need to fabricate. The rudder pedal rotates between two peices bolted together. Plans call for fabricating it our of phenolic, but I want to use delrin instead because:
Click to expand...

Perhaps a sketch or copy of the blueprint detail would provide a better idea of what you are trying to do. Not sure if you want the stuff for making a bracket or a bushing........

Scrolled thru this again and saw that Clutonfred had posted a dwg. Since reliability is paramount with your controls, Using anything that can flex or crack easily is not the best choice. On the drawing above it also shows aluminum as being a viable choice. Aluminum is much less likely to fail than the other choices. I would look up "bunting" bushings on Ebay, and purchase the correct size ready made bushings and machine the aluminum blocks for a press fit. Much more rugged than the other choices and easy to make. It would be 1 piece instead of two.
Last edited: Oct 27, 2021
You must log in or register to reply here.
Share:
Facebook Twitter Reddit Pinterest Tumblr WhatsApp Email Link