From what I hear its much much worse than polyester.....

VE has a very different odor than polyester. I like the VE odor, hate the polyester odor. YMMV.

Planning to break out the epoxy today. The odour smells of a young, developing aircraft to me!

Update: My brother is out of the woods so to speak. He's been responding to all treatments well and the doctors said he'll make a full recovery thankfully

NYC is still a scary place to be at the moment, but at least it's finally starting to plateau here, we were starting to worry it wasn't going to.....our Governor has been amazing through all of this and I'm grateful to him and his staff for trying as hard as they could to manage an almost unmanageable situation. Here's to hoping this pandemic starts to dissipate sooner rather than later, it's been a nightmare for sure

I made a 5 coffee filter respirator. 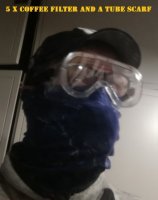 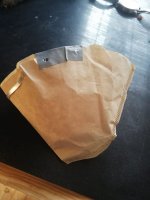 Speedboat100 said:
I made a 5 coffee filter respirator.

I'm doing something similar...and to think I hated my gifted-to-me-for-X-Mas tube scarves.....ya never know when something might come in handy

Had to break out the sewing machine anyway to fix my Fly Baby seat covers; used the opportunity to stitch up a couple of face masks.

pictsidhe said:
I have started developing mild symptoms and will be staying home.
Click to expand...

How are you pic, haven't heard anything in a while.

Yes, please stay well, we need you around here!

Starting to see a little more traffic in nortwestern Los Angeles metro area and Ventura County. For a few weeks there, it was like the 1970's on the freeways again!

I'm fine now. I felt like crap for a few days, then a week of feeling tired. I've been busy at work and home. My hours have just been cut to an average of 43 a week, so I can get on with more stuff now. Still working on turning my basement into a shop.

Cool!
Yeah, I had to finish my basement in January... then wrecked my knees...
Always something.
But I have 14 months before Oshkosh.

Glad that you are back.

We haven't stopped working, haven't had to wear any PPE other than what we always wear. We're building Arion Lightnings for the Arion Aircraft Company, including the redesign of their wing spar, new tooling, and substitution of fiberglass for carbon fiber. They've now got a stonger spar at a little over half the weight of their earier spars. we've been building parts for Sport Performance Aircraft's Panther, and working on re-introducing two very fast aircraft that have been out of production for a while, after making some improvements to their manufacturability and assembly processes. I think this entire mess has been overblown. Regardless, it hasn't affected us one bit.

Mike Stewart said:
"Grimes is a really, really good company in what they do."
Click to expand...

Dunno where "Grimes" came from. I don't drink so . . . who knows. I meant Gleim of course.

Moderator Note: Again, please confine this thread to personal "wellness checks." It is not a place for general COVID-19 information, which can be found and shared elsewhere on the internet. HBA is not a forum for general discussion of the virus, the pandemic, cures/treatments, and especially not government responses or lack thereof. Please do check on your friends, let people know that you and your family are okay, or not, because our members are friends and we want to know how you're doing.

Please contact myself or any of the other moderators if we can answer any questions you might have.

Neighbor up the street lost her mother, father is still in intensive care. My brother's mother-in-law had it and recovered. There were 16 people in the wing of her nursing home; 13 developed Covid-19, two of them died.

Washington State was the original starting point in the US, worst-hit was King county, where I live. Fatality rate's been higher here than in other states, but many of the deaths were in nursing homes. I think it provided some warning to other states to isolate the vulnerable parts of the population early. After being first in the nation for several weeks, Washington is now ~20th in the US, as far as number of cases is concerned. We started isolation early, I think that helped.

Mentioned back when this thread started that my wife and I thought we'd already had it back in February....my symptoms were mild, but she had the works. Went to urgent care twice, her lung capacity was down to ~70%.

FINALLY, three months later, she was able to get the antibody test. And it came back negative.

And some reports are now saying that test is only 50% accurate.....

Bit of a bump.

Mcmark said:
If there is logic to this can someone explain it to me????
Click to expand...

Yes, but such discussion is out of bounds here.

How about those Acro Sports?