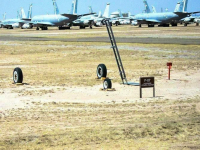 Source unknown, but it gave me a chuckle. ;-)

Those Davis-Monthan bone yard guys....
B

Thanks for that ; i needed a laugh !!

I caught it myself, about four years ago. What's interesting is the change in the background airplanes with the different angle. You can see the road in the first picture that divides the parking zones.

I didn't realize that the F-117 had been given the "Nighthawk" name.

Even funnier if you use 3 lengths of welded chain instead of the tires, attached to ground anchors.

At my home airport we used to host an airshow every fall. During the show, the announcer would tell people to be sure they had their cameras ready; we were expecting a flyby by a stealth fighter sometime soon. About midway through the show, he'd say, 'OK, get your cameras ready; he's coming through now!' (And we'd play a jet sound through the PA system.) Then, 'Hope you were able to get the shot, because they were only allowed to do one pass.' Was hilarious watching all the people craning their necks to find it in the air, then asking their neighbor if they saw it. One year, right after the gag, the airboss told the announcer to tell the crowd to expect a blimp flyby soon. Announcer was hesitant to make the announcement; afraid that the airboss was trying to punk *him*. Finally he reluctantly made the announcement, and about an hour later, the Blockbuster Blimp did a couple of passes. Turned out that they'd been at a football game in Starkville MS that afternoon, and were scheduled to cover a game in Jackson on Sunday. Jackson ATC told them that we were conducting an airshow, so they 'detoured' a few miles to do a flyby. They came back a short time later (after the airshow officially ended) and did a couple of touch and go's on the grass strip.

This belongs in the "Most Beautiful Airplane" thread
K

There's plenty of lab Sapphire out there big enough to make windows from, and you DO realise Sapphire is AlO3, Aluminium trioxide, Transparent Aluminium.

The blue is impurities, iron, titanium etc... made in a lab with only Al and O it's clear, High end watches use it since at Mohs hardness of 9 there are VERY few things that will scratch it, pricewise I don't see it going in suburban windowpanes however
T

Clearly from the picture, you all have been had. Anyone who has been near one knows they are taildraggers. They fake the nose wheel to keep your eyes away from the important stuff. 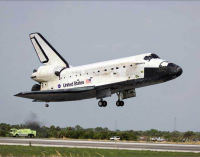