Dearest Nutters.
Am grinding through endless calculations, as one does, and unhappily discovered me Static Margin is too low.
Only 4.5%.
What are my options?
I’m a MetricMan, sorry. 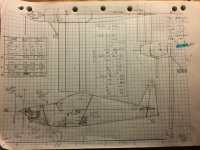 Lengthen the tail arm or increase the stabilizer area. Probably a little of both is best.

You could increase the length of the motor mount. Be sure to account for the added forward wetted area, which is destabilizing. Also if that's the battery behind the cockpit, you can move it forward.

Neat looking little plane you have there.

Just by eye, both the horizontal and vertical tail areas seem small. As stated, lengthen the tail or increase the areas.

And move the battery forward.

Move the pilot forward. (to the CG is best)

Use whatever method you're using to do a quickie analysis of the RV-4. Then, whatever margin of static stability your methods say it has, shoot for that number. Looking at your airplane, my gut feel is that if you have the CG between 15% and 35% MAC it will be fine.

While you're at it, be sure to check stick force per G, as this may wind up influencing the size of your horizontal tail, too. It's entirely possible with a plane this small to have a satisfactory static margin, but have stick forces that are too low.

The gut impression by looking at your three-view is that the horizontal tail is OK at least for CG's up tp 30%. I do not know the computation method you are using. But bear in mind that static margin depends on things like downwash at the tail and fuselage interference, which are difficult to figure out with precision unless you use more intricate analysis methods. Another point is: evaluate pitch sensitivity too, which is not necessarily related to static margin (may be due to control kinematics or by lack of pitch damping). Aircraft such as the Teenie Two and KR2's are pitch sentitive and require extra piloting skills.
However if you are convinced that the static margin is insufficient, do as McRae104 says, or as BBerson says, or change the battery position, or make the tail cone a little lenghtier.
L

Advice to me is that Static Margin is (generally speaking) about 10% MAC, but it is very difficult to calculate as it's an elusive number, with many factors that affect the outcome. Then there's the Stick fixed and Stick Free Static margins and there's generally about 5% difference between the two - from what I've read.
So if you have a really good formula, maybe we should evaluate it. I can't read the info on the freehand drawing.
George

I think the point here should be that the static margin calculated with the simple formulas should be high enough so that with the real world factors it is still in the safe zone.

hosscara said:
Am grinding through endless calculations, as one does, and unhappily discovered me Static Margin is too low.
Only 4.5%.
What are my options?
Click to expand...

First - Excel or any of its freeware copies is your friend. Set up all of your math, including CG estimates, static margin, lift slopes corrected for AR and downwash, tail volumes etc in Excel, then you can iterate to your heart's content.

Third - the tractor prop will use up 5% or more of your static margin. Shifting the engine forward increases the amount of margin taken, so engine shifting should only be done in small amounts.

My vote is establish a tail volume you want and look hard at getting that volume by increasing tail arm length. You will like the airplane's manners way better that way.

Many thanks for the interest, responses and advice. Much appreciated.
I use Excel extensively; but am moving to Linux Mint with Libre Office and FreeCAD next month; SWMBO says I can get me a new komputah.

My obsession is to modernise the tiny aircraft as they were the early 1930s; engine were weak thus aircraft shrank to match the available power.
I'm trying to update that concept for myself.
Soooo, a major driver is to keep the aircraft as small as possible while preserving decent table manners.
To this end I'm trying to keep the total length of the aircraft to <5m, currently the design length is 4.9m.
Simply extending the tail arm, the obvious solution, pushes the length >5m; my teeth are clenched at the mere thought of that.

Another issue at this size is that the pilot is, by far, the greatest single point weight in the design (nearly 33% of gross weight); so wherever the pilot goes so goes the CG. Since the pilot must sit with legs over the main spar this limits the ability to move the stick fixed NP without extending the tail arm. Damned if you do, damned if you don't.

Regarding the calculation methods: I've been cross referencing nearly everything I can lay me hands on. The initial calculation basis for the NP (Xnp) came from Dan Raymer's Simplified book; I also ground through Gudmundson's derivation and came to very nearly the same result. Stinton's Design of the Aeroplane has a nice section of Longitudinal Stability. Pazmany's Light Airplane Design doesn't go into Stability in great depth.
My usual GoTo book is Hiscock's Design of Light Aircraft. Since his design example (DOX) is a wee bit bigger than mine, he has the luxury of deciding what the Static Margin should be (~10% of MAC) and then moving the wing to achieve this.
I don't have that luxury; where the wing goes the pilot goes the CG; that's just how it is.

I thought of increasing the H.tail coefficient to ~ 0.8 by increasing H.Tail area, but am not comfortable with that; am more than a bit concerned the pitch sensitivity will become too low. I don't want the aircraft reacting to the pulse in the me index finger.

Another idea is to reduce the MAC by increasing the AR; pilot doesn't move, wing doesn't move, Xnp & Xcg do not move; this might be a way forward; but I haven't yet had the time to grind through the sums.
There might be some other benefits too (lower Cdi) as long as wing weight remains sensible.

Extend the rear fuselage, its easier to address excessive static margin than insufficient in flight test (one can always cut the stabiliser down).

Stinson has a method where one cuts out the plan view and the side elevation and uses a pin to find the centre of mass of the cutout. Always good for sanity checking and quick experimentation either in paper or AutoCAD.

Are you certain that you will not enjoy the sportier handling at 4.5%?

The obvious solution is a higher HP, heavier, engine.

Some of the Spitfires had a neat stability trick. They were stick fixed neutral to unstable, but a weight hooked up the elevator circuit gave stick free stability. They got a lot easier to fly after that was incorporated.