Split rudder solution and their effect on flutter

Hi,
as the Beast is designed to cruise at 220kt and topspeed should be above 260kt, I am going through great lengths to remove the likelyhood of flutter everywhere possible.

The problem we have to face is, that the engine produces around 150N of thrust at idle. The BD-5 is using a thrust attenuator that I do not like to build and as the Beast is way more efficient than the JSX-2, the idle thrust would almost be sufficient to keep it at level while idling (at pattern speed). This is also why airliners can sustain cruise speed on their descent while at idle...

Originally we evaluated this scissor type spoilers in the wing, but we already have part of the fuel tank there, so I would rather not have something electric being inside the fuel area (a wet wing construction). I like the idea from the Darkaero, where they use a split rudder as a drag device but I have serious doubts about whether it will work at high speeds. Basically (as far as I understood them) they have actuated both halves by a cable attached to each pedal. This means, you will only actuate one half rudder when flying a turn or you brake the same way as on ground by pressing both pedals, driving both halves apart.

My concerns are, that you now have a rather thin element where aero forces are acting upon and there is a spring acting against them only. So in my mind this looks like the invitation for flutter to me.

The option I came up with, is a mixer inside the tail and both halves being mounted on the same hinge line. An electric actuator presses the halves actively together and you can move them by rudder pedals as in any other plane. Then, the actuator could change the offset via the mixer and drive the halves from each other to braking position (+/-45° offset). This way, they are actively driven together when inactive and braking and steering motion is independent of each other (due to the mixer).

Another benefit would be, that you can control the airbrake with the thrust lever. I had a conversation with the engine manufacturer and they support a custom lever, where I could use a quadrant below idle for drag brake actuation. This has the additional benefit that you cannot by mistake activate drag brake while adding thrust and also complexity is reduced a lot.

Still, you have two aerodynamically unbalanced and rather thin halves. Who knows and can tell me whether this solution is viable or not?

If your splitting mechanism is very rigid, the two halves can be treated as a single part. Irreversible controls are used on all supersonic aircraft for several reasons. One being that they eliminate flutter. The split rudder may also produce flow quirks leading to dimished rudder action. or aircaft oscillations. That could also mean a rigidly split rudder will still want to flutter as a unit. You probably need to try the idea out if you can't find anyone else doing so. It does seem like a good place to have a drag brake, so it's very likely to have already been tried. Split flaps used to be extremely common, split ailerons have been used, too. It could be worth looking into their behaviour.

Check the Cozy MkIV and the Douglas SBD Dauntless for tried and true airbrake ideas on fast planes.
A

The Dornier Do-217 used a tail stinger drag brake that opened into four petals like a flower. ( All WW2 German bombers were supposed to be dive bomb capable, a bad idea in heavy 4 engine aircraft )

Testing showed it not working as well as hoped, and it put more strain on the rear fuselage. ( requiring reinforcement and more weight )

you don't need to dive bomb, so that idea may work for you. A split rudder brake also needs a reinforced fuselage, so that's about the same. The advantage is no extra flutter issues for the vertical stab & rudder.

A recessed plain flap on fuselage sides, behind the wing, like a F-86, may be a better choice. Or under wing dive "flaps" like were developed for the P-38 don't affect lift much, but add drag. In either design you want to be careful not to disrupt the flow over the tail surfaces.

Perhaps a plain flap under the fuselage like some Rutan derived canard craft is best?

I've heard of other aircraft having an umbrella tail brake, though I can't remember which.
The protoype Hawker Hurricane had a section of split flap behind its radiator for additional drag. It was soon disconnected as it hindered low speed radiator airflow. Perhaps a switch to split flaps may be worth a look? They perform similarly to plain flaps near stall incidence, but have lots more drag at lower incidences.

Look up the air brakes on the F-16. They open inboard of the elevator and work very well.

This can also be mounted to the fuselage and open on top and bottom. The F-15 air brake sticks up in the air in a similar fashion off its back.

The plane is only about 16 feet big, that's why I already ruled out most of the brakes I could find. Eurofighter top shell type was the favourite, but it would shield the rudder. Bottom shell is used by the gear bay and behind it the engine. Side fuselage has the air intake and the tail incorporates the exhaust of the jet.

This only leaves wings and rudders...

Use case is either to fly to a big airport at cruise speed of 220kt (Airbus comes in at 210kt with slats only) and then brake on final to 80kt short before touchdown while on 3° descent. Second use case, fly to small airport at eco speed of 150kt (idle thrust already keeps it at level) and then be able to get to flap speed quickly (and stay there at 5° descent). Without flaps it is impossible to descend with a jet, speed would immediately rise to 150kt again...

The split rudder would have the benefit that 100% lift would be kept available, that and because of the wet wing with retractable gear I dislike the scissors in the wing solution. So this thread is more about is it possible to be built without flutter than finding alternatives.

Thanks for all your input, I would most appreciate ideas to avoid flutter with the rudder solution. Are the halves supposed/allowed to touch, what is minimum control rod diameter, etc... The good thing about this solution: if it turns out to be not working, I can change it to a conventional rudder due to the common hinge line.

What about moving the prop pitch into Beta range (noting that one needs to make sure that the prop can still be feathered with an engine failure. Turboprop skydriving aircraft often come down nearly vertical in beta pitch.

Scheny said:
The split rudder would have the benefit that 100% lift would be kept available....
Click to expand...

100% lift is always available - airplanes that use spoilers on the wings merely raise their AOA to compensate for the lift killed by the spoilers. They don't accelerate downward because they're producing less lift than their weight - they just descend faster.


Scheny said:
that and because of the wet wing with retractable gear I dislike the scissors in the wing solution..
Click to expand...

Spoilers don't have to be buried in the wing - they can hinge up from the skin, as shown here:

Which is eminently doable on wet wings with gear retracted into them.


Scheny said:
I would most appreciate ideas to avoid flutter with the rudder solution. Are the halves supposed/allowed to touch, what is minimum control rod diameter, etc... The good thing about this solution: if it turns out to be not working, I can change it to a conventional rudder due to the common hinge line.
Click to expand...

So if you consider the Rutan derivative canard aircraft as having split rudders that just happen to be 30 feet apart, you've got a place to start your design. For example, the Long-EZ/COZY rudders only deflect outward on their respective winglet - never inward. The DarkAero folks (one of whom is building a COZY MKIV) probably took the idea from the canards and just moved the two rudders next to each other on a single vertical tail. In any case, this system is used on Berkuts as well, and since with an O-540, Berkuts can reach 240 KIAS at low altitudes without any rudder flutter, I'd say there is an existence proof of the idea that split rudders can be used without flutter.

The most important thing (at least on canards) is to NOT allow the rudder to ever have zero load on it - it always has to have a bit of inward force, and it HAS to be very rigidly supported. When I first started flying my COZY MKIV, I had a bit of rudder flutter due to my changing the design to make the rudder hard stop adjustable, and I did not make it stiff enough. At 201 mph IAS it did not flutter - at 202 mph IAS it did. When I stiffened the rudder hard stop, there was no flutter up to Vd (220 mph/0.9 IAS).

At any rate, your control system needs to be as stiff as you can make it, as does the control surface and the supporting vertical tail. On a tiny little plane, stiffness shouldn't be that hard to achieve without too much weight.

It is very hard to incorporate beta on a jet

As for 100% lift, what I meant was being able to use it near stall speed where every little part of Ca you can get is important. Reason is I flew an Aquila 211 with similar wing and if you have +5kt at landing it will glide longer in the flare.

Stiffness seems no problem with carbon over honeycomb, but I am not sure whether they should be allowed to touch each other, or if they are, to have rubber in between. What was the force on your rudder variable stop?

That clamshell like they use on big jets for reversers may be easyish solution... 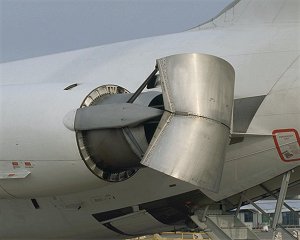 This is the "thrust attenuator" I wrote about in the first post. The BD-5 uses one.

Yes I get it - but at the same time even if the goal wasn't to redirect thrust - just the pivoting of all that surface into the slipstream would work well as a spoiler...

The only other solution I can think of would be to have an X or Y shaped setup on the fuselage so that it does not block airflow to the rear controls.

Or adding belly strakes like the F-16, but allowing them to move so they can point in opposite directions.

I'd go with a simple forward hinged airbrake mounted aft of the wing spar. Most of it uses only about a half inch of depth. You'd need to accommodate a tunnel for the actuation cable and a box for the bellcrank and spring. But you could mold the tunnel into the skin sandwich, and the box is a relatively modest complication compared with some of the other schemes being proposed.
You must log in or register to reply here.
Share:
Facebook Twitter Reddit Pinterest Tumblr WhatsApp Email Link