Seems a running trend on here is to keep costs down by trying to cram an airplane inside a sea can, or a trailer, or that you can take on the bus, or just fold up and keep in your back pocket for when you’re bored. I kind of question whether that’s a false economy given how hangar space can be shared. My fun flying home base has mostly T-hangars, plus some full rectangular hangars and of course the end units on each row of T’s are sort of half-and-half. All of these hangars were sized with a Piper Seminole in mind as that was the largest airplane a normal person was reasonably expected to ever want to fly out of this place.

To date, in a single T hangar I have seen three autogyros with enough space left over for a classroom and a pile of storage for general stuff (a trailer an a few motorcycles, I think). I also recognize that with some sort of lift two airplanes could be fit into a single T-hangar though no one at this field has done it… yet.

In the rectangular hangars I currently know of the following parking arrangements:
-a Tiger Moth and a J-2 Cub
-a Cherokee and a Pietenpol
-a Wagabond, an RV-7a, and an Acro II
-a Baby Ace, an Isaacs Fury, and a Sindlinger Hurricane

There are probably others but my point is that space can be made and a single airplane hangar doesn’t have to hold a single airplane. If you and your friends liked Sonerais with folding wings you could probably put six or eight in a rectangular hangar with room to spare.

In any case, what space efficient hangarage have you folks seen?

Hanging the birds and or lifting only the tail up to the roof on some taildraggers only.

This is by far the best "use case" for the Pou du Ciel configuration. The original Pou (with the later airfoil and other upgrades) is going to be a very very strong contender for this.
Last edited: Apr 25, 2022

Tiger Tim said:
In any case, what space efficient hangarage have you folks seen?
Click to expand...

I've seen two "short wing" RVs and a moped sharing a T hangar, with a bit of room to spare for toolboxes, a small workbench, and a dorm fridge.

US T-hangars must be bigger than the ones I’m familiar with. That’s wild what can be packed into them. 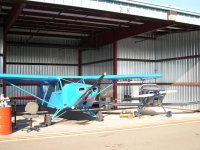 Wickham Bluebird and Thorp T-18. Currently, the Bluebird shares the same hangar with a Wickham Model D and a (disassembled) Wheeler Express.

Pete Bowers' original Fly Baby sharing an open hangar with a Long-EZ. Did this for about six years, in the '80s and '90s. Took a little work, to fit the planes around the support pillars. The owner of this (trophy-winning) Long-EZ didn't want the Fly Baby club members handling his airplane, so the Fly Baby could be taken out and putting back without touching the EZ.

The tailwheel on the Fly Baby wasn't the swivel type, so I made a kind of "Billiard Triangle" with casters. Pick up the tail, drop the tailwheel in a slot on the triangle, and move it around as needed.

My current Fly Baby is in a larger closed hangar. I don't share the hangar with anyone else, but it has a pickup truck, wings from a Warwick Bantam, two work benches, shelving loaded with aircraft parts, various bits of leftover furniture, and a pickup truck stashed with it.

Wanttaja said:
wings from a Warwick Bantam
Click to expand...

Ron, have you flown a Bantam?

I’m curious about how it flies.

BJC said:
Ron, have you flown a Bantam?
Click to expand...

No, this was a "barn" find. Buddy bought a new house, it had airplane parts in the basement. Wings, cowling, instrument panel (no gauges), wheels, etc. Did a bit of digging to find where they came from...even found the exact airplane. Also had two brand-new Bendix mags, which I lent to a fellow chapter member who thought he had ignition problems. He suffered a stroke, and my mags were sold with the airplane....

See "The Homebuilt Detective" in the April 2007 issue of EAA Sport Aviation.

My former Swift partner once put four airworthy Swifts in a 50X48 'chicken house' hangar (the tapered truss support posts take up a bit of floor space), with a fully assembled Stinson 108 in a back corner. Wish I'd taken a pic...

A neighbor kept a Curtis Robin & a Travel Air biplane in another 50x48 for several years.

How about one of these, 12feet diameter.

My property is adjacent to a private grass runway which I have access to via my driveway, and the entry road. I kept my RV6 in my 3 car garage for 5 years (along with 2 cars). I "spun" it in and out after taking a few measurements. Definitely a conversation starter when you open the garage doors or taxied up the road!
V/R
Smokey

An Apache, a Fairchild 24W and an Ultra Pup (unfolded) all fit neatly in my dreams, and are very low maintenance (but, sorry, no pictures).

I have seen several aircraft stored, engine off, standing as near to vertical , at the back of hangars. Cubs come to mind. Also, have seen quite a few hung from the ceiling. I've also seen a modified car lift used to lift an aircraft up and a second one pushed in underneath. There's also a five bay rotary carousel in a hangar in the UK.

Flying Flea. Wings folded in less than a minute. Want to see video to proof it? Go see this video from 04:37.

Hang them from the walls or on sliding rails like hanging beef?

Or hang it from the rafters to make room for a surprise going away party.