That is a very good question, I had not thought of that!

I have not seen any material about it before either.

It will be interesting to see if anyone has some information, especially on how to build one.

It doesn’t work well and is noisy. It looks cool. The blade is blanked off as it passes through the wing making less thrust and the air shockwave makes noise. It’s been done.
P

How much less well doesn’t it work ? it seems like in some configurations it could offer a significant advantage.

Pilot-34 said:
it seems like in some configurations it could offer a significant advantage.
Click to expand...

That configuration works well on several small model airplanes.
A disadvantage is that prop blades are exposed to gravel thrown up by wheels.
The prettiest version of that is the Aerosports Archon SF-1 ultralight that resembles a stealthy, fifth generation, jet fighter from a distance. It has a slot in the wing and the top of the fuselage where the prop turns. The prop is near the trailing edge of the wing, but the lower half rotates in a hollowed out fuselage. The fuselage belly skin deflects gravel away from the propeller.

This configuration also offers the option of mounting the propeller ahead of the rear spar ... if needed for balance.
Last edited: Sep 21, 2021
T

At the RC club they are popular for a form of slow combat. They can run into each other and the prop is partially protected. Slow motion smash up derby.
P

Engines buried in the wing
Or mounted above or below less than a half prop diameter.
Or pusher prop with engine mounted in cabin.
C

My question would be what One would expect to gain from a "prop-in-wing" configuration?
I understand why the concept is being used in model aircraft, but I would be interested to know how it would benefit something I would strap myself in to.
W

Chip Irwin has a prototype with electrically powered props blasting the ailerons. One sharp cookie.
Limited in duration (small batterie capacity), used to assist in takeoff and landing.
I expect the production version will also have a prop in the vert stab blasting the rudder

That would be the Merlin then.

challenger_II said:
My question would be what One would expect to gain from a "prop-in-wing" configuration?
I understand why the concept is being used in model aircraft, but I would be interested to know how it would benefit something I would strap myself in to.
Click to expand...

It would allow You to position a propeller by where you needed it not by where the wings allow you to.

Thinking in terms of a sea plane it could bring pylon height down.

We’ve had this discussion on HBA before, probably more than once. A search on Google should find them. Two planes I recall off the top of my head were the Sawyer Skyjacker and the SF-1 Archon. There was another one that had the props nestled between two closely spaced stacked tandem wings, but I don’t recall the name.
Last edited: Sep 22, 2021

There was also a Pottier slotted-wing example if ai recall.

Google finds lots of pics. Our old threads also had some good photos. It may still be sitting out in plain view at Mojave Airport too.
M

I saw a presentation once from a group of students who had built a model airplane with props in slots in the wings. After some careful performance measurements, they realized that the efficiency of the props (less thrust) there was much worse than in other locations (nose for example).
P

That’s exactly what kind of information I’m looking for if find it in written form let me know!
T

There are advantages. The flow maintains attachment at much higher angles of incidence. There are NACA papers on this as well from the 40's and 50's. It doesn't take a lot of diverted power to have a positive effect, but if one fails, the consequences are swift and severe when operating in configurations where it's advantageous.

There are other related configs that allow better performance as well...and varying the angles of incidence arbitrarily. The higher Re is used to raise the critical aoa to more than double even before the use of variable geometry.

I built a small (1m) RC based on this capable of both vtol and 80+ mph flight with a system that can use either of the two engines to drive both props in case of engine failure. The servo for each includes an encoder to determine torque imbalances and modulate the motors accordingly rather than drive the esc's using the throttle command directly. Still a disaster if a motor fails (on purpose) at present, but a future version would extend full single motor capability for vtol.

It's a unique concept completely absent from the race to the bottom with the eVTOL/ tulip madness crowd at the moment. Ive had the idea since high school many decades ago, inspired by NACA papers. It's been flying for a couple of years now in one form or another.

The prop-in-wing concept is also from NACA papers and has interesting features, though. Disadvantages for sure, however. 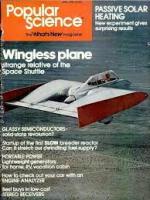