Experimenting with tape. Trying to replace epoxy/glass taping mess and expense and time.
Tape is impressing me. It needs special techniques to make good bond not simple. Needs research on different tape types and techniques. It is lightweight and fast to apply. We'll see how it goes. 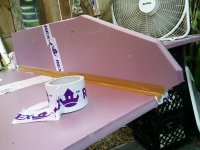 Tiger Tim said:
Allen, that’s an interesting project you have going there. Is your scale mock-up going to fly? I hope so, as I think there’s a lot to be learned from it especially when you’ve come up with such an original design. When you do fly it please fly it lots in many different weight configurations and test maneuvers. I’d suggest going so far as duplIcating a full-scale airplane’s lengthy test program and modifying the model accordingly as you learn its quirks.

Elsewhere on the forum are two rather lengthy threads about a prototype that had a quarter scale model built but not tested beyond showing it would lift off the ground before starting work on the real thing. Flight testing the real thing has shown time and again that maybe the model should have been fully tested before locking in the design. I can’t stress enough how important it is to learn from that.
Click to expand...

Thanks very much for the good advice. ;=] I will get some RC equipment and thoroughly flight test the quarter scale version when it gets done. I wonder if there are wind tunnels that can fit a four-foot wide model to rent some time on at Embry-Riddle Univ. or elsewhere in Florida.
Specifically, I wonder if it is a good to add twelve degrees of dihedral only to the bottom of the wing surface for good stability? I'm not sure if it is good to leave the top surface level on a wing with bottom dihedral only.??

Aesquire said:
Unfortunately, no, and the problem with almost all shapes like a "traditional" airfoil is that the camber, the curve, pitches the nose down , and increases with speed.

Here is an example of a wing/body design that's only flown a few feet up.

Notice the big horizontal tail that keeps it from flipping nose down into the drink after it lifts off. You probably don't need one that big or position, but most flying machines have a balancing surface that changes how much it pushes with airspeed.

It can be weird with flying wings and lifting body designs. A typical modern flex wing hang glider doesn't have a separate tail, but still does the airspeed changing balancing act with sweep and twist.

www.moyes.com.au
Notice that the wing at the center is at a higher angle to the air than the wing tips. Those tips don't actually push down in normal flight ( but will push the back down & nose up in certain situations like a past vertical dive ) instead the lift vector, the direction the wing lifts, changes from center to tip in a curve that gives the same pitch stability as a tail on a 747. It's subtle, very not obvious how it works, I'd need drawings and hand gestures...

It seems EZest to merely put some washout in the trailing edge of my SkySled 'wing-body' airplane design. I understand that built-in solid feature simulates upward deflection of both horizontal stabilizers which are the trailing edges of the flying wing design. The horizontal stabilizers can be operated differentially, one up and one side down to also function as ailerons. These devices have been called "pitcherons."
Perhaps they can have the capability of being 'trimmed' so they function as trim tabsl??

Allen said:
.... These devices have been called "pitcherons."
Perhaps they can have the capability of being 'trimmed' so they function as trim tabsl??
Click to expand...

The commonly used term is "elevons". Perhaps your ideas would have been better accepted if you had familiarized yourself with the common language already in use.
A

Yes, the Elevons should have a trim adjustment so you don't have to push or pull all the time to stay level. Adjustable in flight, so as the speed changes you can trim out the pitch changes.

Not all ultralight aircraft have in flight trim, since the speed range is small and with careful design ( or luck ) and alignment often a thin strip of aluminum on the trailing edge that you can bend up & down to adjust trim is adequate.

Typically there is also in flight trim for the rudder, too. But that's not on every small plane as conventional controls use pedals or a rudder bar you push with your feet, and legs have more strength and endurance than arms. Again, often a small ground Adjustable trim tab is fine.

When you go bigger, more powerful, trim becomes a serious thing. On a big fast plane like a P-51 Mustang, there's a trim control right at hand so the pilot can trim out the forces, which are Way too much to hold by hand. The tragic crash of a Mustang a few years back at the Reno Air Races, seems to be caused by the trim tab fluttering & tearing off. The sudden G load as the Mustang pitched nose up, Hard & Fast... appears from video to have actually broken the pilot's seat. He was knocked out cold, possibly outright killed, by the sudden forces. And without the trim tab, a body builder cannot hold the plane level at 400 miles an hour. Or at landing speed either. There's enormous forces involved.
You must log in or register to reply here.
Share:
Facebook Twitter Reddit Pinterest Tumblr WhatsApp Email Link