This post came from the Flying wing as cheap and simple option for basic fun flying. thread, but since that is now up to 78 pages and over 1,500 posts, I thought I'd start a new thread. I'd really like to explore this planform, not changing it to a delta or a pure plank or anything else.

What are the pros and cons of this planform and how might this work at full human scale? It would be short-coupled (but not as bad as a plank) and you'd have to pay special attention to stall behavior and the transition from the long-chord center section to to short-chord outer panels. Would wing fences from the leading edge to the vertical fins be a useful addition? Vortex generators on the outer panels? Stall strips on the inner panels? I don't know, but my gut tells me this planform has some real potential for a sport plane.

For those like me that had to look up the Sig Wonder: 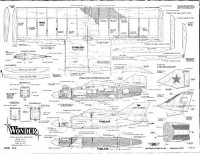 It's a very interesting design. From the point of view of a homebuilt aircraft project, it could be easily broken down into a number of smaller parts for easy assembly, transport, and storage. Imagine a fuselage pod with engine and landing gear that ends at the projected trailing edge of the the ailerons, a long-chord wing center section mounting the elevator, fins, and rudders, and two outer wing panels. The canopy would actually be mounted on the center section which in turn sits on top of the pod.

Take the exact same exterior shape and crank it up to full LSA gross weight of 1320 lb and you have a stall speed of under 44 mph but you need a lot more power to make it work. 100 hp gives you 111 mph max and 100 mph cruise and a climb rate over 900 fpm but a power off sink rate also over 900 fpm.

Keep in mind that all these numbers assume a max CL of 1.4 and do not properly account for special behavior of low aspect ratios. Still, my takeaway is that something like this could make a great single-seat fun flyer but is less attractive once you move up to LSA weights.


Tiger Tim said:
While not the purest form of a flying wing, how would a human-carrying Sig Wonder work out? One wouldn’t easily fit in a container but you could probably pack a whole bunch of them in a club hangar
Click to expand...

Putting the tail surfaces on a boom allows them to be smaller and lighter. It also improves pitch damping. Puting the tail up against the TE of the wing offers novelty, but I don't think it will be easier to build. If the tail is to be removable for storage/trailering, then a boom is no less convenient than an abutting surface. And, if we'll want/need a tail incidence different from the wing's, a boom removes some hard-to-model slot aerodynamics.

I do think a lot of pilots would feel more comfortable with the layout than they would with a flying wing/tailless design.

Vigilant1, it sounds like you are comparing the Wonder layout to a conventional twin boom (or single boom) arrangement. I wonder (haha) if essentially giving up a substantial amount of wing area would compromise performance in any way compared to the Wonder layout. Since I would normally include all the control surface area when calculating area of a flying wing, but not include tail area for a conventional design, you are talking about a 25% cut in wing area.
V

cluttonfred said:
Vigilant1, it sounds like you are comparing the Wonder layout to a conventional twin boom (or single boom) arrangement. I wonder (haha) if essentially giving up a substantial amount of wing area would compromise performance in any way compared to the Wonder layout. Since I would normally include all the control surface area when calculating area of a flying wing, but not include tail area for a conventional design, you are talking about a 25% cut in wing area.
Click to expand...

A flying wing design requires significant compromises to achieve stability (unless we'll be using some fly-by-wire magic). These reduce the aerodynamic efficiency of a flying wing design, which is why they generally aren't as aerodynamically efficient as a plane with a tail. If the estimation spreadsheet/ program isn't taking this into account, then the performance of flying wing designs is probably being overestimated.
It's not unlike a situation with canard aircraft: yes, all the horizontal surfaces provide lift to support the aircraft. But, due to other compromises required by that layout, the overall aerodynamic efficiency and performance is about equal to planes with a wing and a (downward "lifting' ) tail.
In sum: If the Wonder is a flying wing, then it isn't proper to treat the whole wing as lifting as efficiently as a wing on a conventional design.
Last edited: Aug 5, 2020
P

The center section looks a lot like the Fauvel improvement in Tailless Aircraft in Theory and Practice.

If you use that aspect ratio and planform you will get all of the negatives - no stall or spin resistance, poor pitch stability .
A better are low powered short span flying wing would look like -

The Sig Wonder is a fun model to fly. That said, the platform was for crazy flying. The idea was the tightest loops possible, and recoverable. 6-8 ft loops. Agility was primary, but because it was a wood model, combat attrition was too much work to build a fleet for a weekend. Coroplast and foam became standards for that.

In large size, it’s going to be about horsepower. It’s not a floater. I think most of these short coupled planes have high power to weight ratios. Even the gliders fly at higher speeds than conventional. Landing gear will be important too. The model is hand launched for a reason. Tail in the grass has low control. Conventional gear will be ground loop happy. Tricycle will be much better. If you make it a Sig Wonder, don’t expect ARUP flying. Maybe be interesting During the Oshkosh airshow.

First thing I would do would be to put a gap/slot between
The now two wings. Next, you have to decide on booms,
or center mounting. After that, work in transition from air
to water, and back to air. You're gonna want a plyon engine.

I look at the Wonder planform as being sort of a plank plus. A nice, easy wing where all ribs are the same but with the elevator and fins/rudders pushed just a little farther back for a little more stability (look at it as more forgiveness for the inevitable different engines/props/canopies/etc.). Yeah the models built to that planform were meant to be, um, ‘flippy’ for lack of a better term but here I see it as less tumbly then a pure plank. Make sense?

Would it be objectively better at many things? Probably not. It would certainly be different though, and that’s enough for a lot of people.

Matthew, is there any way I can pull the old used car salesman's trick, and "switch you" over to talking about a different Sig model that really would make a fantastic airplane?

You can't pull that trick on me, VB! ;-) Besides, if we start talking about RC designs that could inspire full-size homebuilt, we're going to need a whole new thread and it will be a long one.

I always thought an ugly stick with the pilot popped out the top of the wing would be cool. Not much for downward visibility but it'd be neat.

I think it’s been done, or at least something like it, as the Léger Pataplume in France but few were built. The much more conventional Pataplume 2 has been much more popular.

poormansairforce said:
I always thought an ugly stick with the pilot popped out the top of the wing would be cool. Not much for downward visibility but it'd be neat.
Click to expand...

cluttonfred said:
RC designs that could inspire full-size homebuilt, we're going to need a whole new thread and it will be a long one.
Click to expand...

Well, then we sure picked the right guy to start one of those...
T

I always threaten to make an Ugly Stik full. Plenty come close like the MiniMax. My reason was pure model evil though. It would open every Ugly Stik to be scale. Walk through a contest pit and see P-51s, Fokker D7s, a Cessna and a Ugly Stik. Boos all around. I still have my original first flown in 79.

If we are going to delve into unusual planforms, my vote is for an X-wing. Probably needs a canard to make it work, though.

Also been done, sort of, the Catto Acro-X, though the plane was lost when Craig Catto (of Catto Props) had to bail out. I think that sort of pusher biplane canard could make for a great compact fun flyer, though I'd avoid wheels on the wings. 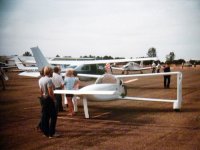 pictsidhe said:
If we are going to delve into unusual planforms, my vote is for an X-wing. Probably needs a canard to make it work, though.
Click to expand...

"I'd start a new thread. I'd really like to explore this planform, not changing it to a delta or a pure plank or anything else."

Wow, only 18 posts to go completely off the rails...