vhhjr said:
Does this filter apply globally or only to posts coming into your account? If it's global I guess I'm out of the posting business for now.

It's for the individual member. The rest of us can still see you just fine.

Erik Snyman said:
Vince, I have mistakenly put a "Ignore posts by this member" filter against your posting. Very sorry for the mistake. I am trying to rectify it.
Click to expand...

It should be a toggle - use the same control again to "unignore" a member's posts.

vhhjr said:
If you want to stick with the German WWII theme the He-162 and the ME-163 could be single engine candidates.

I have looked at them both and the one with the best history would be the ME-163 Komet. Leave off the C-Stoff rocket engine and use the engine that the SubSonex uses. There was a full size glider replica built in Europe some years ago that you can see fly on YouTube.

The flight reports that I have for the HE-162 Salamander say that it had marginal flight characteristics somewhat due to the lack of thrust. This could be corrected by scaling up a model had better flight manners and with a better propulsion choice. The other problem is with scaling for a couple reasons. The wing isn't very large and a 66% replica would have only 44% of the full size wing area so you would have to make the wing larger than scale and build light. The nose wheel housing would also be in the way in a reduced scale replica.
Click to expand...

There's a YouTube Video featuring a former He-162 pilot, indicating machine was agile in flight, but difficult to handle in airstrip, having lost more pilots during takeoff and landing than in combat, also a USSR video with negative comments about flight features. There were plans for a turbine version of Me-163, but many projects existed in last days of allied attacks to Germany, making a choice is hard, all look cute. 'Al Bentley drawings' has plans of several of it, not building plans, but exploded, X-ray views. Blessings +
Last edited: Nov 13, 2020

cluttonfred said:
Even the Finns dropped the swastika after WWII even though their use of it had absolutely nothing to do with Naziism. Some people in Asia would view the rising sun in the same way.
Click to expand...

Yeah! Svastika, from Sanskrit: 'sv'= 'well; 'asti'= 'being', and the German suffix -kheit='condition of', has its oldest roots in Siberian Shamanism, was a Solar Symbol, no idea why nsdap choose it. Board is from Jean Riviere: 'Talismans, Amulets, Pantacles', other is a 1989 Calendar. '51'= Sí, Spanish yes; '52'= 'Omega', the end.
The 'Hexagram', wrongly called 'Star of David' is not hebrew at all, as a matter of fact, it forwards to Renfan, Quevvam, Egyptian idols, equal to Saturn, Chronos, Moloch. 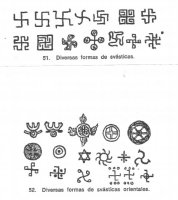 A french homebuilder made an small turbine, installed it on a pod above fuselage in a glider, they were banned from flying, with allegations of 'safety concerns'; of course a turbine adds self-takeoff to a glider, but I failed in making any concept about its dangers, if it fails, the airplane simply glides.
Airbus is stoned of the 'grandeur' of francs, a german tribe, and if allowed, they'll look for a monopoly position in aeromodel market. Unbearable! Gesund +
Last edited: Nov 13, 2020

nicknack said:
Yes that would be an interesting candidate. Doesn’t have landing gears though
Click to expand...

cluttonfred said:
Even the Finns dropped the swastika after WWII even though their use of it had absolutely nothing to do with Naziism. Some people in Asia would view the rising sun in the same way.
Click to expand...

'Rising Sun', Dawn, in the anciet times was devoted to 'that Greek call 'Apollyon' and Jews 'Abbadon the exterminator'. Beware of the dog! Salut +

nicknack said:
Reputedly the somers-Kendall sk1 had good flying characteristics. It looks quite a bit like a 3/4 sized HE162. Has the benefit of being 2 placed, mostly wood and fiberglass.
View attachment 92636
Click to expand...

The 'Butterfly' type of tail unit is reported having structural problems, some Beechcraft Bonanza crashed because of it, they say. Blessings +
Attached is image of SK-1 after two commands in 'Microsoft

asw27 with 2 jet engine fly just perfectly. No problem in that.. it's just perhaps the regulation and paperwork to do. But you can fly as you want for sure. Just the low effective time before overhaul the engine are very low.
R

Urquiola said:
The 'Butterfly' type of tail unit is reported having structural problems, some Beechcraft Bonanza crashed because of it, they say. Blessings +
Click to expand...

V-tails do not have inherent structural problems.
Bonanza structural problems were more complex. First, Bonanza is the most widely-produced V-tail, so more Bonanzas have crashed than any other V-tail.
Secondly, Bonanzas grew considerably in weight, horsepower and top speed over the years. This forced Beechcraft to eventually (1970s) standardize Bonanza production with a conventional tail from the Debonaire. Debonaires' conventional tails look similar to the tail on Baron twins which were also derived from the original Bonanza airframe.
Beechcraft did publish a service bulletin to reinforce Bonanza V-tails.
However, the primary reason for most Bonanza structural failures was poor pilot technique. Too many private pilots "got in over their heads" losing control while flying in clouds. The fell out the bottom of clouds in high-speed spiral-dives and pulled the tails off their Bonanzas. These arrogant pilots were the primary reason that Bonanzas earned a reputation as "V-tailed doctor killers."