Edit: Someone pointed out that it makes way more sense to use an electric propulsion system than pedaling, as even a small motor can put 2 - 3 times the voltage that an average cyclist can produce.

The goal is still the same - extend the glide ratio of an e-powered ultralight glider, so the glide performance can match the number of a high-performance unpowered glider.

Now the question is, whether a really small 1.5kw (120kv) motor is sufficient to turn something like a Super Floater into a high-performance machine like the 100,000 dollar Ruppert Archaeopteryx! （For a few hours at least).

You can always go for a larger motor (say 15kw), but a smaller motor is less expensive weight less (only 680g), require less electrical knowledge(if you can build an e-bike, you can build it too), draws far fewer amps and very easy on the BMS and battery (only 0.5c discharge rate at maximum thrust).

With a 4kw battery, you can use the full thrust for at least 2.5 hrs. You can use any prebuild e-bike battery as well. 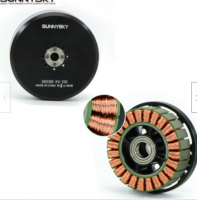 Could a light sailplane get any meaningful performance gain by the mean of a human-powered propeller?

Obviously, the goal here is not to make the aircraft self-launchable but to extend the L/D by a significant margin.

I remember seeing a video of a glider pilot catching thin rope mid-air by hand and sustained level-flight(perhaps), wouldn't that kind of "thrust" easily achievable by a feet-turned propller?

Edit: the glider might need a 10ft propeller to work - but hypothetically, would the thrust coming off that propeller increase the glide ratio of a carbon dragon(or similar design) from 1:21 to 1:40?
Last edited: Oct 11, 2021

The pilot would be far too exhausted from pedaling... he or she would likely be making fairly poor decisions in the soaring department. FWIW, you need to have your brain working reasonably well for any medium or high performance soaring.

I totally agree with Victor Bravo

It would be better to add electric "FES like" system even with small battery instead of relatively complicated installation of pedals and transmission to prop.
Pilot must be focused on controls and watch other gliders arround. Sometimes is really not easy.
If pilot is not a professional cyclist it will be not able to produce more than 3 Watts per kg of weight per hour = 85 kg pilot could theoretically produce 255 Watts, but definitelly not together with safe "multitasking" (pedaling + controlling the airplane + watching area arround).

qchen98 said:
to extend the L/D by a significant margin.
Click to expand...

This is the principle of the Pseudo-Ornithopter or oscellating wing of Henryk reference posted above.

A prone hang glider pilot could raise and lower his CG using a pulley setup with foot stirrup as a part of the harness support installing a light and low drag auxiliary power.

The Trampofoil is a water born version that demonstrates this principle and the work necessary to practice the propulsion.

jedi said:
At the time these reports were published there were no 20:1 hang gliders.
Click to expand...

Victor Bravo said:
The pilot would be far too exhausted from pedaling... he or she would likely be making fairly poor decisions in the soaring department. FWIW, you need to have your brain working reasonably well for any medium or high performance soaring.
Click to expand...

Some glider pilots, are so Dumb ; they can't even figure out
that the glider with the North heading, has right-away over the
guy heading South , on a West facing ridge !!! GURRRrrrr
That happened to Me one day at Jean airport, when we were both
in SGS 1-26 gliders , and i was heading North .

Please is somewhere available video where the "human ornithopter" really flies?
On two posted videos we can see... lets call it taxiing.

This looks like a flight - but it is a RC model.

And this RC model looks awesome and is flying perfectly....

The Snowbird Human-Powered Ornithopter was designed and constructed by a team of students from the University of Toronto. On August 2nd 2010 it sustained both altitude and airspeed for 19.3 seconds, becoming the world's first successful human-powered ornithopter.

University of Toronto has a long history designing aircraft with flapping wings. They achieved takeoff by flapping propulsion in 2006.

Canadian attepts was not so effective (24 HP +jet engine or 35 m span flappers !)

I have recently revisited an old project to demonstrate the ornithopter / pseudo ornithopter propulsion principle.

I do not intend to complete the project and construct the current configuration but would share the design to date and assist with continued development. If there is an interest in developing a working model to demonstrate the principle of a rigid wing model battery powered glider (no propeller) please contact me or respond with your interests on this thread.

I can provide plans for a sheet balsa 18" span un-powered model that I have tested in the past. I have a concept for a power system to add to the model that could be scaled to a man carrying glider with the option of human power assist.

The following sketch to be discussed in a following post. 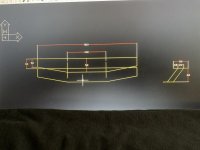 Yes, a reverse stagger or tandem flying wing. Each wing has a Cessna type plan form.

Plans show a 36 foot span ultralight glider designed to demonstrate the propulsion system of the Jerzy Wolf AIAA Paper 74-1028 posted in post #4 above. The pilot would stand and squat on the lower wing.

The model referenced in post # 15 above is a 1:24 scale sheet balsa hand launch glider. Decalge between the two wings is not shown in the drawing. Before starting a model let me know and I will highlight additional construction and operational details that will be helpfull.

Construction of a full scale UL was begun in 1973 but was discontinued when construction issues surfaced.
H

jedi said:
the propulsion system of the Jerzy Wolf AIAA Paper 74-1028 posted in post #4 above.
Click to expand...

=the same effective methode of wing propulsion,
in 1977 dr Wolf was made horisontal flys on his ZERA 77 hang glider with springed
harnesse !

-I try to made similar,KASPERWING (15 kg weight !) with 5 kg foothlaunched cage.