No big updates to report,however,I did order the tires and they should be at the store Friday waiting for me to pick them up.
Once I have the tires in my hands I will choose rims,brakes and finalize the rest of the landing gear mods....

Hopefully,fellow Stork builder John Wadman,has steered me in the right direction for the tires that I've been looking for.

Hey, if the Nancos don’t work out don’t blame me! Besides, I’m
Into them for the same amount of cash as you are! Gotta love Wallymart! Really! Who wooda think they’d be getting stol tires from Walmart? I read on the Kitfix site that several guys were running this tire and seemed happy with them. The only complaint was windage drag. Inflated they are 12” at widest point. $33 bucks a tire. . . R u kidding me? That’s about $234 bucks per tire cheaper than those Aero Classics from ASS.

John wadman said:
...Who wooda think they’d be getting stol tires from Walmart?...
Click to expand...

Keep in mind that what you see on Walmart.com is NOT being sold by Walmart! The Walmart web store has become sort of a poor man's Amazon.

Whoa Wingnut< those 26s you got are a lot cheaper than the 26s that ASS is pushing! I like the classic MGTC look!

Aerowerx said:
Keep in mind that what you see on Walmart.com is NOT being sold by Walmart! The Walmart web store has become sort of a poor man's Amazon.
Click to expand...

Hey guys.....I really appreciate everyone that is following my build thread but I would like to ask that if anyone has comments that we use private message or start a new thread to discuss the topic.
It's nice to look through everyone's build logs on HBA and not see all of the conversations that get sidetracked from the original build thread....it just keeps the thread on track,clean and easier to follow.
Thanks for understanding.....

Well,I picked up my new tires today and they are a sight.....
Cant wait for my rims so I can get these things mounted and inflated.
They should swell up considerably when some pressure is thrown to them.....
Can you say ....TUNDRA TIRES 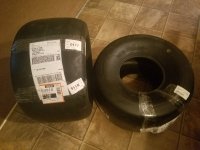 It seems like forever since I've made an entry to the build log so here's a quick update.
I haven't really worked on the Stork much other than researching parts and materials.
I've been busy flying the Tomahawk and getting my hours to be "legal" to fly the Stork when its completed.
I've had some issues with my current instructor but he endorsed my logbook for solo flight.
Unfortunately,I havent been able to fly since he signed me off due to the weather.....it's been extremely windy 24/7 here.
Can't wait for these storms to pass through so I can get some time in the Tomahawk.

The Citabria developed a fuel leak so it was decided to pull the wings off to inspect them for damage.
Glad we did.....
We knew that the inboard trailing edge and rib behind the wing tank needed repaired but we also found 5 broken ribs in front of the aileron bay...they were broke at the top of the ribs right behind the front spar.
There was a hanger collapse about 10 years ago and this plane has been inspected many times since and the damage was never found.
Something hit this wing !!!
This is what happens when the owner of the aircraft is also the A&P doing the Annual inspections......complacency.
That plane had probably been flying,damaged,for all those years.
And this plane does aerobatics all the time.
LUCK.............. !!!

Some of the airport bums working on the wings....lol
The aircraft/airport owner is at the trailing edge of the wing .....SUPER GREAT GUY !!!
This plane was his father's and was passed down to him when his father passed away a few years ago.
He is now an A&P and is setting things right by doing it the right way instead of pencil whipping a log book.
His son is also a pilot and a natural at it....that boy can fly anything and do it gracefully.
Looking forward to getting the Citabria back in the air for them. 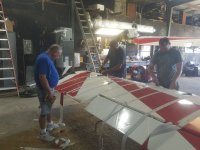 So it's been quite a while since I've worked on the Stork......
I had a little down time at work today so I decided to do a few things.
1. Cut the front & rear spar carry throughs.
2. Layed my rib pattern on a board to make the rib jig for the stick built ribs.
3. Cut blocks to mount on the rib pattern to make the stick built rib jig.
4. I have a suspicion that the plans are wrong about the rib size and spar carry through location....I dont think they will match up.
So,with that being said, I ripped some material to make a few "fake" ribs with from scrap wood we had laying around the shop.
Once the fuselage is boxed in and the spar carry throughs are installed I will compare the fake ribs to the fuselage.
If things line up I will build the "real" ribs from my supply of sitka spruce.

Notice the difference in wood color between the 2 spar carry throughs.....
Dark wood is original kit wood that was cut from old stock and the light wood is new supply from ACS.......what a difference time makes. 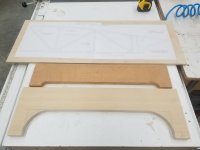 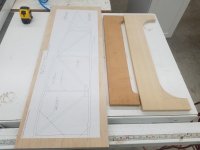 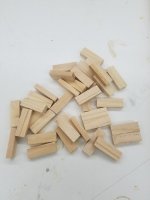 So....I decided to finish the rib jig and start building a "fake" rib after work today.
I still need to cut the gussets and get it all glued up.