Wood is still drying so I designed a trim-tab into the right elevator half.
The plans show the acceptable area to incorporate a trim-tab but not the actual drawing for the design.....
Still trying to figure out which way I want to go with the design.....cable operated or use a high torque metal gear r/c servo controlled with an electronic servo driver.
The electronic route would be the cheapest and most certainly the lightest.

I wanted to wait until my kiddo could help glue up the laminations for the elevator halfs before I continued on the build.
Since he is with me this week,I took off work today and we got busy building a Stork again. 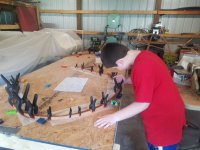 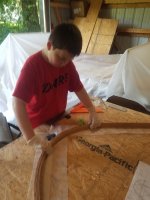 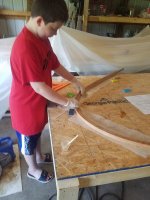 He's a great helper.....when I can get him off the X-box and away from Fortnite.....lol

The kid is a slave driver !!!
He decided that we needed to get the top fuselage frame off the table so the corner blocks could be added.
So the top frame came off and the corner blocks were added to the remaining frame.
Once they are cured,a good sanding on both fuselage sides and we will be ready for the ply to be added.
You can see the second fuselage side frame leaning against the table in the last pic.... 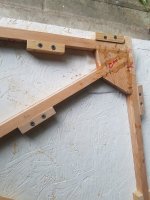 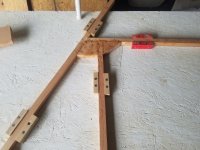 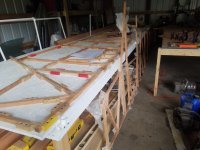 Finally got a few minutes to get back out in the shop to work on the elevator.....
So.........Houston,we have a problem !!!
I took both elevator halves out of the jigs and laid them on top of each other to see how they matched up.
They were close but were off a bit.
I attribute this to the natural tendency of the wood strips not to bend identical to each other and also I probably should have placed more blocks to use as anchor points.
The number of blocks used were what was shown on the plans but this gives the wood an opportunity to bow between the anchor points.
I had to think about this problem for a bit to figure out a resolution.
My final resolution was to flip the pieces over and swap sides on the jig.
With a few clamps and some screws both pieces match the other sides jig with a little persuasion.
Not elegant nor pretty but it should give me 2 identical pieces.
So.....with the pieces anchored in the jigs now,I glued the spar in place and started to add the members.
After the glue is dry,I will add the spar doubler and the rest of the members in a day or two.
It doesnt look like a lot was accomplished but a major problem was found and fixed.
Plus,there are several measurements that had to be figured out while laminating the strips and several points that had to be matched to make sure it all fit together correctly.....hinge spacing,elevator bow to match stabilizer leading edge,spar doubler spacing...etc.
Making 2 identical parts and hitting specific points has been the biggest pain in the *ss of this build so far.
I'm counting today as a win though.... 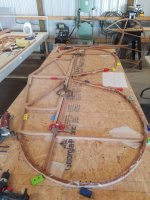 As a side note.....
There's always going to be little differences in the wood thickness so I like to use a hand plane to knock down some of the joints to ensure they are flat after they've been glued up.
I have a very small plane that works quite well but it's a tad too small for my kiddo to get a solid grip on.
I bought a bigger plane thinking it would be useful and it will be.
However,this piece of crap that I bought is useless.
The blades arent even long enough to fit the planer.
The blade can go in the middle or front of the plane...they arent long enough for either position.
This piece of junk is going back...... 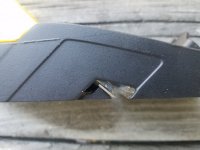 I'm doing my best to keep up with cdlwingnut but the man doesn't appear to ever sleep.......lol

Im still acquiring parts and materials for my build and progress can slow down quite a bit during these times.
A Forum member just helped me out tremendously......FritzW stepped up and offered a set of wing tanks for my Stork build.
Many thanks to him....that's one more item off my list of needed parts.

These are the times that make you smile during a build........

looking good, i sleep plenty my trick is my project is where i work so if it is slow or even just 20 mins during lunch I can sneak off and get some done

After everything is cured in a few days....the large diagnols and all the corner blocks will be added....... 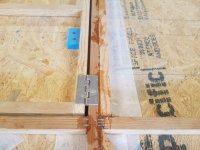 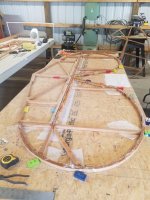 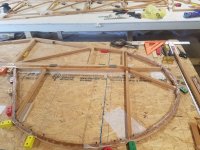 I have an observation and question that I want to bring attention to.
In the construction videos that Roger made of his Stork build...he has A LOT of glue that needs to be cleaned up...and yes,I realize that he wasn't using T88.
Looking at other build logs I notice that their work looks very clean...no glue to be cleaned up,that I can see.
My work tends to have glue all over it and looks a mess but cleans up nicely.
Especially the laminated pieces...glue all over !!!

So my question is this......is everyone just posting pics of their work after it's been cleaned up or am I just particularly messy with my glue ?
You can see in my previous post that the piece that was flipped over and is now being used as the top has glue and wax paper all over it....it will clean up nicely but looks a mess at this point.

I've been using a very small hand planer to clean up the work and it has been doing a great job...but it is slow going and tends to get uncomfortable after a bit.
I ordered an electric planer last night in hopes that progress and accuracy will improve a bit.

I had a pleasant surprise waiting for me when I got home tonight.....new wing tanks.
I posted an ad needing wing tanks and FritzW responded that he had a set and could help me out.
This gentleman,without knowing me personally,sent me a set of new wing tanks without first having the payment in hand not to mention he also paid for the shipping out of his own pocket....all on faith.
This,boys and girls,is a TRUE GENTLEMAN and a HONORABLE MAN !
I wish there were more people like him in the world.....
So,I just wanted to officially say thanks to FritzW for his help .......THANK YOU FritzW. 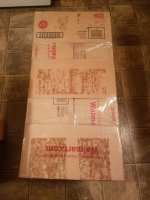 Great packing ....no damage at all. 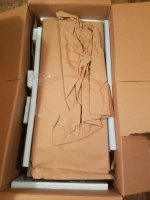 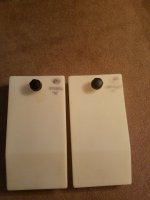 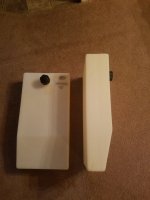 The kiddo is going to be ecstatic when he gets here tomorrow and sees the tanks......that's all he's talked about for the past few days....he's been tracking the package since it was shipped...lol

Sorry for posting on your build thread but I wanted to thank you for your kind words.

MadProfessor8138 said:
...is everyone just posting pics of their work after it's been cleaned up or am I just particularly messy with my glue ?
Click to expand...

No apologies needed for posting on this thread FritW....I'm just hoping that the thread is enjoyable for individuals to follow and with any luck people can learn from it,as well as them educating me on subjects.
I tend to NOT sugar coat things so if those words seemed kind towards you,it's because they are honest and true.
That is a reflection of YOUR character sir....I truly wish there were more individuals like you ,and a handful of others on this forum,in aviation around me locally.
Once upon a time,people in aviation were pretty good individuals,but like everything else in the world now days,the riff-raff has bled into our world and it is slowly being infested by their negative opinions and actions.
I miss the Good Ole Days when everyone that flew was a friend to each other even if you had never met them in person....those were good times..........

So,now I have a major problem .....lol.
The kiddo wants to start building the wings since the wing tanks are setting here.
Unfortunately,due to space limitations,we can't start the wings until the fuselage is off the table and on its gear so it can be moved around the shop.
I ended up bribing him so he would forget about the wings until the fuselage is done.
He gets to pick out the wheels/brakes/tires for the Stork this weekend.....that way we can finish the fuselage up and get it on its gear and then start the wings.
I downloaded the catalog from Asuzalite for him to pick what he wants......he was like a kid in a toy store right before Christmas while he was looking through the catalog.
I have a feeling that this is going to get expensive.......lmao

I've been giving some serious thought to Roger's original gear design.
He used what was available to him at the time and it worked,motorcycle forks that have been resprung with die springs of the appropriate weight rating....but it's also very heavy.
Hopefully,I'm as smart as I think I am because I just ordered 2 shocks last night so I can redesign the landing gear.
I'm thinking that I can do a "quasi" oleo strut arrangement.....similar to what Just Aircraft uses for their design.
The shocks have 3 inches of travel,730 lb rating each and weigh about 2.5 lbs apiece.
That would cut some major weight......IF IT WORKS. 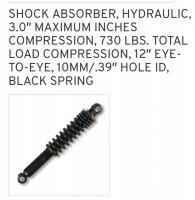 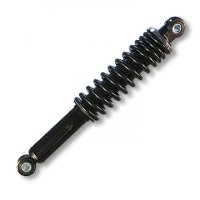 I finally had the time to set down and review the plans properly.
I knew that I was one member short for the elevator build but I also confirmed that I was short a spar carry through for the fuselage.
Order has been placed to ACS for the wood.....

Had a package waiting for me when I got home from work today......
The springs for the landing gear had arrived. 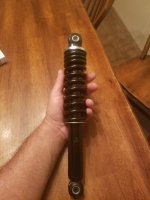 I know 3" travel doesnt sound like much but with the shocks incorperated into the gear and 20" tires running low pressure...3" should be plenty.
Besides,Roger's original Stork wobbled and leaned like an Irishman,so stiffening the suspension a wee bit may not hurt laddie....
No offense to the Irish.....lol

Will post drawings of my modifications to the original landing gear when I get a chance.

Hopefully,my package from Aircraft Spruce will be here by Friday so I can get some work done this weekend.
The order contains wood for a member in the elevator and a piece to make a spar carry through in the fuselage.

Slowly but surely it's coming together....

Hopefully,I can get some work done this weekend.

Hopefully,fellow Stork builder John Wadman,has steered me in the right direction for the tires that I've been looking for.