I am putting a rotax 503 on my airplane in the tractor configuration. could i get away with removing the shroud and fan to keep it cool. I don't plan to tightly cowl it. Just wondering if free air would be enough for it with the prop wash blowing over it?
P

cdlwingnut said:
I am putting a rotax 503 on my airplane in the tractor configuration. could i get away with removing the shroud and fan to keep it cool. I don't plan to tightly cowl it. Just wondering if free air would be enough for it with the prop wash blowing over it?
Click to expand...

I went free air on my Hirth and regretted it. To hard to get it right. I know people do it but its so easy with a fan. My 2 cents...

I tell you, you have to channel the air over the cylinders, only the air generated by the shovel is not enough.

I do not have photos of mine right now, but I pass you a link twice a couple of photos of what the forces are like.

Since Tom Peghiny and partner Spark Lamontagne first lightened the Flightstar and named one model the II SL (for “Sport Light”), they haven’t been able to sit still and simply admire their work. From our first pilot’s report on the SL 3 years ago,1 the two have tweaked and adjusted the model to...

No cowl needed on a 503. Just a duct to get cool air to the rear cylinder. 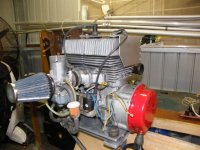 I have yet to see a 503 that is free air cooled live very long. If the problem is not overheating from too little flow, it is shock cooling from too much. The fan works best, the cooling goes up and down as a function of RPM, and in a plane, that is near in proportion to the throttle setting. It is really debatable if removing the fan gains more power than the air scoop uses. Depending on many factors it could go either way, and in all cases it is likely too little difference to justify any time worrying about it.
The people at the factory designed the fan to keep the temps correct, and it does that better than any scoop I have seen yet.
R

hmmm back in the day AX3 ultralights were used in large numbers in the UK for training purposes. All were just fitted with 503 engines with shrouds to direct air onto the rear cylinder and the great majority achieved much higher than 'book' engine hours before needing overhaul. I have one such engine now on my AX3 Weedhopper here in France without a cowl. The cowl is really only needed for pusher engines eg on a flexwing trike. 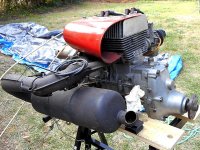 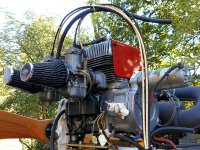 If it works, it works!
I have heard many people say that they are ok, and I even examined on a 503 that someone cut the end off of one of the heads and mounted them 90 degrees so the fins were parallel with the air flow and no cowling was used and it was on a pusher. The engine obviously had 200+ hours on it when it arrived in my shop for no reason of the engine. (I had purchased the plane that way.) It was reported to run good. But there were no engine instruments installed.. Ever, not even a tachometer. So nothing was known about the operational conditions or temperatures.
When I pulled it apart, I found that the pistons had deep scuff marks on all 45 degree marks on the skirt. This is a symptom of shock cooling, or improper warm-up. It is unclear how long the marks were there, some of the grooves had old looking deposits in them, some looked newer. The crank bearings were showing their age, but were not in any way failed.
The 503 is a really tough engine, as long as you don't have lubrication failure or over temp exhaust, they generally just keep running even with severe internal damage or incorrect tolerances.
On the other hand, it is not unusual for me to fly a 503 for well over 500 hours and when I pull them apart, they still look like I could just put them back together and keep going.

In many cases it all comes down to how much you fly. Some people only average a few hours per year, in this case, it might last a lifetime. Sometimes you get lucky... I do not like to rely on luck for the good outcome of any flight.
Speaking of such, when I see K&N filters deformed like the ones in the picture above, it is common to see the filter media that gets damaged by the deformation depart and end up along with all of the dirt it was holding onto in the bearings. I have never seen an engine fail from this but when you wash the oil out of the bearing and spin it, you can clearly hear the clicking sound of damage...
What's worse is when the filters get bent like this and you fly them a few hours, the metal screen in the inside will break and drop bits of steel into the engine... This does not end up so nice.
R

Yeah, I'm ashamed to say the filters have not been replaced since someone who should have known better helped lift the engine/gearbox combo with them. I should have got round to that. The aircraft the engine is on and the one before had both CHT and EGT gauges so I've always been able to keep a good eye on temperatures as I too am sensitive about them. I wouldn't feel comfortable flying any aircraft without having some idea of the engine temp(s).

If you look at his 503, and it doesn't matter if it's a 377UL, 447UL, or 503UL they all face the same problem when going Free Air, you can see the Head Fins don't get Cooling Air account of wrong direction, the Shroud does Help Direct the Air to get to them. Things you can do to lower the Heat problem. Ceramic Coat the Wye Pipe inside and outside. If you Ceramic Coat the Piston Tops, Head Combustion Chamber, the Cylinder Exhaust Ports you can lower your Engines Temps. You can make a Heat-Shield like the Water Cooled Engines use on Sleds to Deflect Heat Away from the Cylinders coming from the Wye Pipe Exhaust from reaching the Cylinder. Here is one I Designed for 377UL/447UL. I would Ceramic Coat it also. The Fiberglass Super Cowel, I think still being made is supposed to work pretty good also. A Billet Head with the Fins in the right Direction would also help.