PTAirco said:
View attachment 128844
How about a half scale Stirling? Pobjoy Niagara engines.
Click to expand...

Once you’ve sorted the engineering for the Stirling’s wing and tail you could build a half scale Sunderland!

Here's one for inspiration, the Curtiss-Wright CW-21 Demon in its original form with rearward-retracting gear used by the Chinese and the later CW-21B with inward-retracting gear used by the Dutch in the East Indies. It wasn't terribly successful, though it could have been developed into something better if the U.S. had been interested in lightweight interceptors. It's not hard to imagine a more powerful version with heavier armament, pilot armor, and self-sealing tanks. By 1943 that Wright Cyclone had gone from the CW-21's 850 hp variant to a whopping 1,350 hp variant in the FM-2 Wildcat. Still, there is real artistry to the design, just look at that last pic.

PS--Lynn Williams, you wouldn't by any chance have one of these as a project in your files somewhere? ;-) 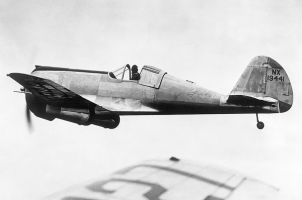 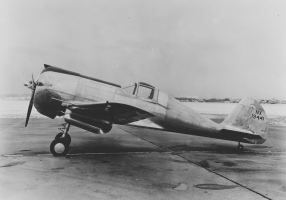 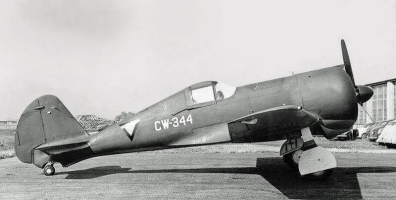 I've always admired this aeroplane, its rakish Ines and phenomenal climb rate. It was probably under-rated at the time but was uniquely suited to taking on early Japanese types, just never had the chance to shine, probably due to force of circumstance, training and tactical evolution plus lack of numbers and infrastructure problems. In other words, no one in SE Asia was ready for the ferocity, direction and power of the Japanese assault.

However, if built using timber, I fear that the tail unit would be a vulnerable area due to the very slender fuselage unless considerably reinforced. A heavy tail might itself initiate unwanted torsional vibration. The rearwards retracting u/c into bathtubs would be a simpler retraction arrangement which would not breach the underwing skin in the way the inward system would. One valuable feature for weight and balance is the radially swept wing leading edge which would assist in establishing the CP/CG relationship. Such a replica with either the Verner 7U or 9 could be a stunning performer and an exciting silhouette in the sky!

Unfortunately I never proceeded with this aeroplane on paper! :0)

Foiled by auto-correct again! That should have read 'rakish lines' and 'radically swept'. Dammit!
H

Recently saw this video of Kermit Weeks' Curtiss CW19. I'm rusty on this. There was the Demon, I know there was a Falcon, not sure what this fixed gear (CW19) was called. Curtiss Wright CW-19R - First Test Flight | On a beautiful Florida afternoon at Fantasy of Flight, we take the Curtiss Wright CW-19R out for its first test flight in this Kermie Cam from the... | By Kermit Weeks | Facebook

I don’t know that the CW-19 ever got a name, just 26 were made and most of those were the 21 armed CW-19R light bombers/general purpose military aircraft sold in small batches to Latin America. Weeks has one of those. 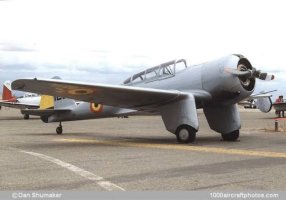 There was a retractable-gear prototype built as the CW-23 but it didn’t go anywhere. 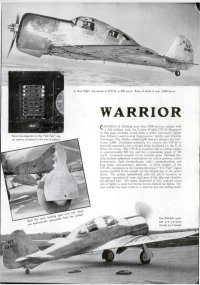 The lower-powered CW-22 saw the most success with well over 100 built for export and over 300 as SNC-1 scout trainers for the U.S Navy. It was definitely known as the “Falcon” in service. 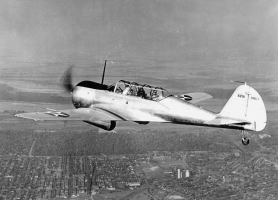 One perhaps apocryphal story about the CW-21 Demon that would explain the odd deviation from typical Curtiss bird names is that the the plane was never actually named Demon. Rather the original prototype that was sent to China for evaluation was marked “DEMON.” on the crate (short for “demonstrator”) and the name stuck.

In his autobiography " Destiny" (I'm lucky enough to have a signed copy), Erik Shilling talks about test flying a CW-21 Deamon (that's what he calls it in the book).

He reports a 5265 fpm climb. Though initially he thought the climb rate was worse than the P-40. But it was pointed out that the VSI units were in meters per second not feet per minute. No self-sealing tanks.

"It was the most impressive airplane I had ever been in,..."

Saville said:
He reports a 5265 fpm climb
Click to expand...

That’s fifteen feet short of a mile a minute up!

Saville said:
He reports a 5265 fpm climb
Click to expand...

Like I said, the CW-21 had great potential regardless of the name, the 1,350 hp Wright Cyclone variant from the FM-2 would have made it truly impressive as an interceptor.

One funny thing about the CW-23 retractable-gear development of the CW-19, note how what was essentially just a panel of idiot lights was touted as an important new feature. Lest we forget how far we have come…. 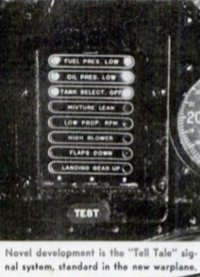