My carb heat box was rubbing on my engine mount and cut in to it a little bit. The engine mount is 4130 steel. After I sanded off the powder coating, it looks to be a couple thousands deep. I have no experience working with 4130 steel tube. How should I repair this? 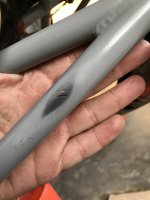 welded patch would work if it does not interfere with anything. See AC 43.13-1B, there are several options, outer sleeve, inner sleeve, replace tube, etc the welded patch should be the easiest if permissible.

Looks more like at least ten thousandths deep, a serious defect. The tubing wall is only about .035" and a nick like that easily starts a crack.

I've often found the tubing worn under nylon ties that some guys use to restrain wiring or hoses to the mount. Abrasive dirt (sand, etc.) gets under the nylon tie and embeds itself in the plastic and starts grinding away at the tubing as everything vibrates. It makes for expensive repairs, with the engine and mount having to come off and the mount sent for repair. One should use only cushioned Adel clamps on a mount.

I would smooth out the gouge until it's virtually gone, then weld a patch over it extending about 1/2" past the area. If you leave it like that, the sharp edges could start a crack underneath the patch.
T

I had a crack once, about that big. It was an overkill fix of outside shell of 4130 in two halves welded. Ends of the crack was stop drilled then welded up first. The factory approved it.

I would probably would stop drill, weld up, and a finger patch over the area.

My opinion is the ends will need to be stop drilled, no matter what is welded over.

My non approved mind wonders if you can weld a tab along the long axis over the damage and consume the damage with the weld. I have seen way worse weld blowouts welded up flying for 50 years.

TFF said:
My non approved mind wonders if you can weld a tab along the long axis over the damage and consume the damage with the weld. I have seen way worse weld blowouts welded up flying for 50 years.
Click to expand...

Yeah. Less is better sometimes. I might weld a tab from across to the other tube and bolt a ground strap to the tab.....
Can't hurt to ask the kit company also. Depends on what airplane that is.

TFF said:
I would probably would stop drill, weld up, and a finger patch over the area.

My opinion is the ends will need to be stop drilled, no matter what is welded over.

My non approved mind wonders if you can weld a tab along the long axis over the damage and consume the damage with the weld. I have seen way worse weld blowouts welded up flying for 50 years.
Click to expand...

Since its not a crack, I wouldn't stop drill it, if its well over half way through I would start thinking about drilling it out. The stress concentration factor of a hole is about 3 (its much higher for a stop drill crack but we will run with it), a 20 to 1 blendout has a stress concentration factor of about 1.1. Yes you will most likely cause the hole to cease to exist with a welder but why go to the extra work and risk contaminating the weld with what ever perspective is on the inside.

Depending on how deep it is, with a bit of stress analysis one could possibly get away only a blend-out repair.

Thanks for all of the advice everyone. To answer some questions, this is a Corvair engine mount for a Sonex.

Mad MAC, I don't really understand everything you said. What exactly is a 20 to 1 blendout? It is definitely not a crack, and I don't think stop-drilling is the correct procedure. I think it is less than .010 deep, but I will measure tomorrow.

I think I'll see if there is anyone on the field here at KSEE that specializes in steel tube construction and see if they will take a look. I would really like to get this repaired without removing the engine, but we'll see what happens.

NOT being a crack, I'd feel confident in just welding it with a spot of weld, grind/polish smooth with a slight hump over the defect.
M

By "blendout" I understand this to mean 20x the depth of the "damage."

Hypothetically, a 1/4" depth would witness a 5" taper up to the regular OD of the tube.

Almost any repair, will look like a repair and may or may not annoy the owner or future buyer.
Tony Bingelis repaired a small cracked canopy by fitting a vent and "removing" the crack.
Welding across the tube could make a worse stress riser than the tiny nick.
Any weld should be lengthwise, not cross tube. Just spot welding it would work. But trying to smooth a spot weld to original is very difficult. A TIG spot weld can be a stress riser also.
Most engine mounts crack at a weld. I have never seen any mount crack other than at a weld.
If the airplane is aerobatic then it should get more frequent inspections. I don't think that nick location could fail suddenly.
Do no harm.... (Hippocratic oath)
Last edited: Jan 3, 2020

BBerson- excellent point. I too am worried that a weld or patch might concentrate the stress and cause a crack. I will measure and evaluate a blending solution.

Take a look at the bottom right clamp in the picture on this site. Somewhere, they must make a small diameter clamp of the width, diameter, and quality that would shore up your scratch. You could even hang a wire stay off it. https://www.herberaircraft.com/prod_clamps.php

If it was my mount I'd take a tee pin and see if I could get it to penetrate the ding and if it will I'd scrap the mount or replace entire tube. In your picture it appears to be much like the beginning of a hacksaw cut and may be deeper then what the eye can see. It looks to be more like a cut then a ding.

AC43.13-1B has all the data needed to assess such damage and the information to repair it. Anything else is just adding more risk of failure. Filling with weld and grinding smooth does nothing for the strength; it's cosmetic only and the tube is likely to crack at the edge of the weld. As the weld metal cools it contracts a lot and puts terrific tension on the edges, and even after normalizing there's still the harder trasnition zone that could crack. It's tricky. Adding a tab between the nicked tube and adjacent tube has been know to introduce cracking at the tab weld, depending on what the other end of the mount looks like. If there are no connecting tubes at the engine end, the tubes flex a bit at the fireall end and a tab ends up getting pulled as it tries to stop the flexing, and it can break free. Tubes can crack at areas other than at welds, too; I once found a 172's Dynafocal mount cracked at the lower cross tube at the right-hand end near the weld, but not in the weld. That tube stiffens the mount as the engine torques against the prop load, but the tubing is loaded in bending--not a good situation. It cracked in a spiral fashion. Later models had those ends covered with finger-patch reinforcements and they didn't crack, but our contracted welding shop got into trouble when they started adding that patch to earlier models. The governmnent paper-pushers said that the modified mount didn't meet type design for those earlier models. Same airframe, same engine model exactly, same prop, just a different part number for the mount. Stuff like that makes aviation ever more expensive.