According to Wiki, it is 98 ft from the deck of that bridge to the normal height of the river Ob. The length of a MiG-17 FRESCO is 36 ft. Does everything in that photo look to be the same scale (even accounting for the perspective of that photo?)
R

Sorry, but I'm not comprehending your words, what are you saying?
R

Vigilant1 said:
According to Wiki, it is 98 ft from the deck of that bridge to the normal height of the river Ob. The length of a MiG-17 FRESCO is 36 ft. Does everything in that photo look to be the same scale (even accounting for the perspective of that photo?)
Click to expand...

Because the plane is much closer to the camera it would appear to be larger, so I don't see a problem. Now in relation to the short video of the Blue Angel, he is much higher above the water and in open space, The Russian Mig is flying into an enclosed space (all three sides and the water surface are forcing the dissipated energy into a smaller area) where the only possible expansion of force is the water.
D

Physics to the rescue. How much energy does the MiG’s engine put out? 5900 lbs of thrust. Water weighs 62.2 lbs cubic ft. How many cubic feet of water are shown being blasted out of the river? Let’s say 100 Cubic ft that’s 6220 lbs of water or 193 slugs of water. F=Ma which is 5900 lbs =193 Slugs x a, so acceleration (a) = 30.6 ft/sec2. That acceleration would happen for some small fraction of a second. So velocity would be something like 1ft/sec. that doesn’t get you a big fountain like that. And that is assuming all the power from the engine went into the water.
R

DaveK said:
Physics to the rescue. How much energy does the MiG’s engine put out? 5900 lbs of thrust. Water weighs 62.2 lbs cubic ft. How many cubic feet of water are shown being blasted out of the river? Let’s say 100 Cubic ft that’s 6220 lbs of water or 193 slugs of water. F=Ma which is 5900 lbs =193 Slugs x a, so acceleration (a) = 30.6 ft/sec2. That acceleration would happen for some small fraction of a second. So velocity would be something like 1ft/sec. that doesn’t get you a big fountain like that. And that is assuming all the power from the engine went into the water.
Click to expand...

I'm for sure math-challenged, but I think there is more at play here, more than the power of the engine, but rather the speed and mass of the plane and the effect to the air it is moving through. ( I tend to think the kinetic energy involved, far exceeds the power of the engine)
Also, you might want to look closer at the water volume, on the very slim chance this is a real, or, accurate representation of the actual event, I would guess many thousands of gallons have been lifted to some extent.

RonL said:
Sorry, but I'm not comprehending your words, what are you saying?
Click to expand...

It is an old Yakov Smirnoff, 1980's era meme of a linguistic term known as "Russian Reversal", that enjoyed a comeback about 10 years back. Here are some examples: 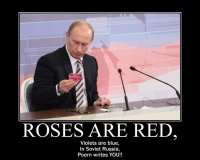 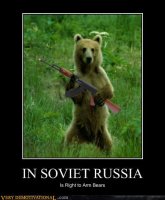 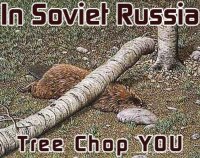 RonL said:
That top picture looks like Burlington Vermont runway and if it is, the 767 could not have wheels up that high in such a short run, but then camera angle can be a deceiving thing.
Click to expand...

I have seen the Blues in Pensacola on the water and the low pass over the water makes spray but not crazy spray like that. 5 mile low pass pretty cool. That spray looks like an outboard popping out of the surface.

Spits look retarded on the ground, but in the air, they are a thing of beauty.

Most beautiful plane ever. On the ground or in the air.

This is not photo shopped:

Well, I have been pretty well convinced the photo is dramatically enhanced, but I still think the disturbance of the water is more significant than just a plane flying over open water. A jet at 700 MPH moves a rather strong "shock collar" or "pressure cone" as it flys along and going into that small window area of the bridge over the water, I think there would be much pressure exerted on the only thing that can flex, that being the liquid water.
The DCS Simulator can only show what is programmed into it and I don't think it was designed to cover the physics of air pressure disturbances.
I have to wonder what gave the artist the vision of mind to show such a dramatic scene?

BJC said:
Spits look retarded on the ground, but in the air, they are a thing of beauty.

The Tv series a Piece of cake, the pilot the late great Ray Hanna.

One of the very few who could do that reliably for the cameras, and the best ever at low flying.
Click to expand...

The artist did it in commission by the USSR government. Every strike of a pen was pumped up propaganda. Good or bad. It just displays a story for the common person. Accuracy is unimportant. Triumph of the Russian spirit is.
R

Turd Ferguson said:
This is not photo shopped:

I have spent a little time watching this video, using a 27" monitor and full screen, then setting you-tube at 1/4 speed, the visual of how much water is kicked up at the tail wheel and what tore off the main wheel fairing has me really giving thought to what might have happened with the mig17 jet.
R

So after watching a small race plane skim the water at a couple of hundred miles per hour (or less) I looked up some specs on a Mig17 along with a screenshot.
General characteristics

The picture in the OP is a fake (and a bad one); the idea that the Mig 17 did the bridge at anything approaching 700 MPH is absurd; the F-14 blowing a rooster tail is a silly painting...

Are you looking for answers or validation of movie fantasy?

Actually, one of the articles linked in this thread said that his speed was 700 KPH, which is much more believable. However, it doesn’t make the OP photo any more believable.

Well... I believe the guy actually did fly under the bridge.

But I don't in God's green Earth (excuse me, in Comrade Lenin's Marxist utopia) believe that is a picture of the actual event.

It's been pointed out that the pull-up as shown would have been an unnaturally high G load. I'll return to that in a bit, but I would also like to point out that the view of the plane is off. We're seeing just short of a full side view. This would only make sense if the pilot flew under the bridge at an angle. It should be a front 3/4s view, or less.

Flying under at an angle not only increases your danger time, but the curved supports for the bridge would be more intrusive.

It also tremendously complicates your run-in. Here's a Google Earth image of the bridge. The white diamond shows the assumed location of the cameraman and the red arrow the apparent path of the airplane based on the photo. He'd not only be exiting under the bridge towards the bank on the other side, his run-in would have to be done at an extremely low altitude over the city. 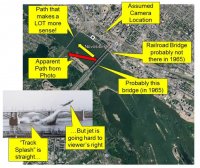 Yet...the splash show the plane apparently traversed the area under the bridge straight. This is, again, an argument for a doctored photo: The plane's direction doesn't match that of the splash. The plane's not banking, either.

The second problem is the apparent SIZE of the airplane. I found a photo of the bridge online, and did a little hillbilly photogrammetry. There was a semi-truck on the bridge, and I assumed that Russian semis would be about the size of US ones... 70 to 80 feet. Couple that with the reported 100 feet height of the bridge deck, and we can draw a diagram of the bridge in relation to a MiG-17. MiGs are small...especially in relation to a relative large bridge.

I used a side view in this diagram so the MiG was more recognizable... but it's obvious that the MiG in the photo is quite a bit larger than it should be.

Finally, let's look into the human factors for this. Here's a snapshot, to scale, of the MiG passing under the bridge. 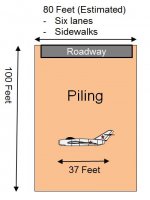 The bridge is six lanes wide (verified by Google Earth), with sidewalks on either side. I don't know what width Russia uses for its roads. US Interstate standard is 12 feet, but since this bridge was built ~60 years ago, I'm assuming the Russian roads were a bit narrower. Let's say the road bed is eighty feet wide, like I show above.

The plane's flying at 700 kilometers per hour; this is about 635 feet per second. The plane spends all of 0.13 seconds under the bridge. About the same length of time as a typical blink, but I assume the Privilov was very careful not to blink.

The problem is, 0.13 seconds is about HALF the normal human reaction time for a visual stimulus.

This isn't a problem for flying under the bridge... you get low, line yourself up, and make careful adjustments as you get closer.

Where it DOES affect you is pulling up AFTER you fly under the bridge.

1. Wrong viewing aspect of the plane
2. Plane out of scale in respect to the bridge.
3. Shows the pull-up happening too close to the bridge.

It's a fake, but an enjoyable one. I'm just assuming the splashes in the river were from some very large New Soviet Man cojones; Captain Privilov no doubt had them.