John Halpenny said:
Perhaps we will see a merger between Raptor and Synergy.
Click to expand...

Soon after the merger, the new company will be bought out by Valkyrie.

BJC said:
new company will be bought out by Valkyrie.
Click to expand...

Yes, but it is not too late to get in before the IPO. Here is a "golden aviation opportunity".

Defination of a "golden aviation opportunity.".. Give me your gold and you can watch it fly away.
N

Why even bother… get the personal flying trash can

great sub-urban camouflage.. if ever flagged down for speed violations, just head to the nearest apartment block dumpster and park right next to the trash cans…

Or you could hide the trash can in big barrel as proposed in "Could you design anything stranger?"post #8 Under Aerodynamics, Design ....etc.

"No drawings but reference the Williams X-jet variations incorporated as the core of a hybred 8 foot diameter ducted fan containing 6 or 8 electric fans quad copter style for additional thrust, range and control:

"Other VTOL systems developed by Williams International included a jet-powered flying belt, developed in 1969, which was powered by a Williams WR19 turbofan, and X-Jet's predecessor, the WASP I (Williams Aerial Systems Platform), which was developed in the 1970s and was powered by the more powerful WR19-9 BRP5, rated at 670 lbf (2.98 kN) thrust and a specific fuel consumption of 0.47 lb/lbf·h (13.31 g/kN·s)."

The 8 foot diameter is a limitation to keep the vehicle street legal and allow storage in a standard one car garage. The roadable requirement is to allow the vehicle to transition from the garage to a suitable VTOL or STOL takeoff and landing area. The duct also allows sufficient lifting area to transition to horizontal flight with a maximum forward cruise speed of 250 knots."
H

". No internal modifications to the counter-rotating micro turbofans were performed. "

Malish said:
Ducted fan propulsion system will work only for slow flying aircraft(up to 200mph) and because thrust of Ducted fan based on "Mass flow" of the air pushing by fan, aircraft powered by this system can't fly at high altitude where air is thin and weight less. With Ducted fan aircraft will fly good only up to 12,000-15,000 feet of altitude. For PM picking this propulsion system - full utopia!!!...
Click to expand...

I am under the impression from what I have read that ducted fan is good to around 100mph or maybe a little more, it is also good above around 200mph (turbofan jumbo jets) it is the middle area from around 100mph to 200mph that it sucks?

A dead thread drifting with the current.
V

Thought I would interject some data from tests on an 11" diameter and 17" diameter fans set that I ran a few months ago. The test bed is a rolling vehicle now powered by a 35 hp 2si 2 cycle engine with a direct drive to the ducted fan. I monitor thrust, torque and rpm. When rolling I also monitor airspeed. The fans are bladded with jet engine compressor blades and the pitch is gound adjustable. Compressor blades aren't opyimized for this application so my results are below the theory predictions. Below is a plot of the 11 inch fan results at zero forward speed. 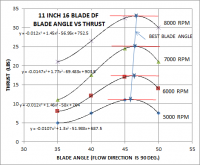 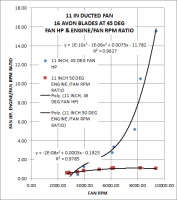 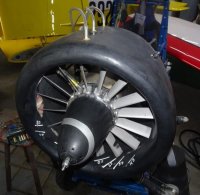 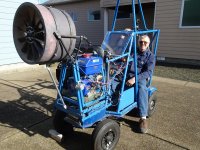 Cool test rig. So you're getting about 1 lb. of thrust per hp?

What exactly is the relationship between the Raptor, the Kasperwing, Dr. Sorokodum's flapping palm fronds, Manolis Pattakos' hand-held propeller/meat grinder, the Australian Wallaby, and nuclear submarines?

Apparently anything end everything being discussed here is rather enthusiastically brought into relevance with one or more of these items, regardless of the actual relevance.

Is this what Steely Dan meant by "Pretzel Logic"?

Victor Bravo said:
What exactly is the relationship between the Raptor,
Click to expand...

Nothing to do with old Raptor. This is about ducted fan utopia, proposed by Raptor NG. See post one.

I think the Williams X-Jet suffered from major drift issues too (no rudder).

rv6ejguy said:
Cool test rig. So you're getting about 1 lb. of thrust per hp?
Click to expand...

The big RC EDF motors are a little better than this. 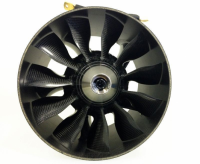 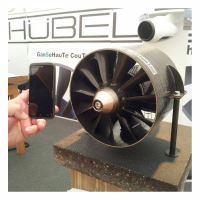 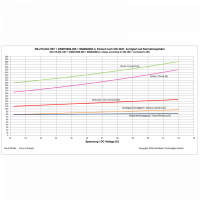 lelievre12 said:
Around 2.8 pounds of static thrust per hp.
Click to expand...

Well based on the Wallaby, they are all pests and should be shot.