bmcj said:
How far does he have to go? I don’t think it would be difficult to get a wide load trucker with a lowboy to plan, load, and move it. They move all kinds of extra-wide loads and they already know the permitting process.
Click to expand...

Leave at midnight with an escort?

Ha, that question brings back some memories .....

Will likely cost a few thousand dollars. On such a short load the cost can be over 10 bucks a mile.
D

cheapracer said:
Leave at midnight with an escort?

Ha, that question brings back some memories .....

Someone told me once that oversize loads can only be done during daylight hours. No idea if that's correct or not.

You my friend have obviously never had children.....

Makes sense. The only ones I've seen at night were army tanks...

Depends on the route and size. Really big oversize loads (like houses) only move in the wee hours overnight.

I remember being somewhat shocked when I saw how they transported race #77 from Reno to Texas.
For most people transporting larger planes can be challenging. But if you’ve got enough cash to throw at it, it’s probably not that big a deal.

Australia the big ones go at night, after midnight. The obvious reason is less traffic disturbance.

The big one I contracted out was a 3 bedroom house, cut into halves. Common in Australia.

The interstates are full at night in the US. They are more willing to deal with the traffic in the day time so some clown doesn’t clip it in the dark. Clipping it in the light is ok.

I used to actually haul oversized loads years ago and it depends by state. Some states only allow in the light, while some ban loads in urban areas during the day.

It’s a patchwork of laws.

And to make it worse, most states assign the routes but won’t take responsibility for clearances. So you might not even be able to use the route they assigned you.

I loved the job but I hated the people because it attracts a lot of people who have delusions of grandeur. When I was first hired they had an entire book full of accident pictures from arrogant drivers who thought they knew everything.

In one case someone dropped a cell phone tower in the road because they used nylon straps without rub protection. And in another case someone was hauling a huge piece of construction equipment and took it into a single lane construction zone, resulting in hitting the front axle against a concrete barrier and causing massive damage to both.

Also once saw two trailer homes collide on I-75 and the rear truck ended up inside the front trailer home and had to be cut out with chainsaws.

Oh, and I can’t forget the time someone flipped a trailer home completely upside down on an exit ramp in Florida.

narfi said:
You my friend have obviously never had children.....
Click to expand...

You you (obviously) don't know what you're talking about.

Hephaestus said:
Depends on the route and size. Really big oversize loads (like houses) only move in the wee hours overnight.
Click to expand...

These oversized loads were done during the day:

I saw one oversize load that was too high for many, many cables across a 7 mile road. The trick to such endeavours is a fairly simple phrase "Just send us the bill".

Waiting for someone to show up and claim they have had every child that has ever been had.

cblink.007 said:
These oversized loads were done during the day:
Click to expand... 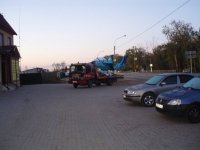 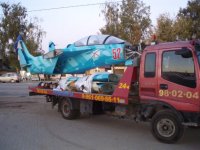 Lol yep it’s a patch work of laws.
Do you need to get an oversize load in to Manhattan? Show up at the bridge between 130 and 1:45 AM.
No problem except that New Jersey was a daylight hours only state.

Need to take a high load around Chicago? No problem operate between the hours of midnight and 4 AM within cook county
Illinois of course was a daylight hours only state.
And the high route around Chicago entered and left Chicago about 16 times
we figured out that most months you could cover that 84 miles in about a month if you did It legally except for the fact that you would have to illegally park the load at the boundaries every night and weekends........

I see that it was designed for fairly easy moving.

pictsidhe said:
I see that it was designed for fairly easy moving.
Click to expand...

Yes, it's was designed to fit in 40' ocean container without major disassembly - that how we moved it US for Sun-n-Fun 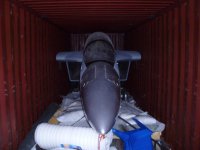 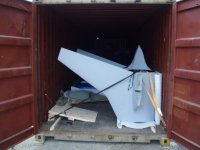 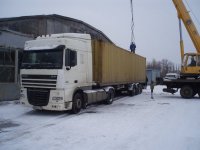