Does anyone know of any resources and/or can anyone share any principles specific to radial engine exhaust system design? I am still thinking about a VP-2 with a 60 hp Verner 5V and wondering about exhaust options. Stub exhausts vs. partial ring vs. full ring? Orientation of individual pipes into ring? Sizing of outlet(s)? Thanks!
S

The Rare Bear is a well-known enough plane in aviation circles to have plenty of articles on it, so it's a place to start looking.
D

Getting the thing to hold together is going to be the biggest challenge after getting it to fit.
Any basic info on "header"design will give you something that will serve.Searching under the 300
series alloys used will lead to the few suppliers of tubing and sheet plus the custom aircraft exhaust builders themselves.
Just an idea:mig something up out of mild steel and whatever and if it works,tig it in 309 stainless

Thanks, guys, but what I am hoping for is finding some 1930s basics (or more modern sources likely quoting older ones) about how to do radial exhausts. I'll keep looking....
T

Stub stacks is probably the only way if you can not find a off the shelf ring. Stub would be my pick off the bat. The old chug chug sound. A ring is going to sound WW2ish. Power drone sound. Building your own ring ain’t gonna happen. Paying for a custom one ain’t gonna happen. The average home builder can do stubbs. Rings are for the people who can build Oshkosh champions. Most of them would farm it out.

I agree that stub exhausts are easier, but the ring exhausts I have heard in person and in videos sounded pretty great to me. Could be something to add later....
G

Find someone with one of these, shouldn't be too hard. Have them make you a ring the size you want. The fun part will be figuring out connectors from the jugs to the ring. It appears a Rotec ring is made up of sections, may start as one piece and cut up into a manageable size for fabrication. 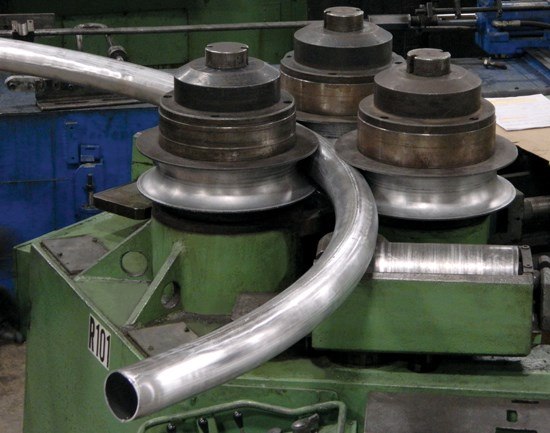 Just a comment or two from someone who once made a LOT of airboat exhaust systems: The Rotec exhaust looks pretty, but I expect there are a LOT of scavenging issues due to the constant cross section of relatively small collector ring. If you look at many of the legacy round engines, you will notice that the entry angle of individual primary tubes are quite "directional" and the collector ring cross section increases as each primary merges with the ring. No chance of accousticly "tuning" in such an arrangement, but no sense in introducing all kinds of restrictions to flow and possible harmonic interference with timing of pulses in individual primaries.

Another issue: rolling or in any other way forming thin wall tubing is EXTREMELY difficult. If you have a mandrel bender available it is quite a bit better, but if you think you are going to roll or press anything less than 16 gauge (usually 0.065) without SEVERE distortion, think again. I have been able to do 20 gauge (0.035) ERW to 4" centerline radius with a rolling die bender packing the tube with grit for a "mandrel" to keep it from collapsing, but many times I would end up on the floor along with a bunch of nickel slag when the tube would burst. Anything is possible, but when it comes to very thin wall stuff, bending is very much an art form. Notice that a lot of 2 cycle production exhausts (and many radial engine rings) are actually formed from flat sheet and seam welded together. A LOT of tooling needed for that, or a heck of a lot of fabricating skill. Now up that from mild steel ERW to seamless 321 stainless or 601 or 625 Inconel and you can see the challenges coming. My advice is to use as much OTC mandrel bent part as possible (primaries) and think hard on how you are going to do the ring, tailpipe (and possibly augmentor tubes). Also look at some WWII era radials (earlier ones did NOT have effective exhaust scavenging) for inspiration.
Last edited: Feb 29, 2020
D

I looked at the pictures of the rotec exhaust and thought that since each section is joined with an
expansion joint fabricating the ring from sheet and tube for the stubs and joints,it would be possible to get a similar result with no bender,provided that the stubs could come strait out or at an angle.

I'm in the process of planning fixtures for a 5-cylinder exhaust for our 5Si. Having faced some of these issues already, but also not looking for anything super advanced. I had found a local source for tube rolling and already have boxes of made-to-order elbows that we've been putting into some 9-cylinder exhaust rings, and a stainless welder who doesn't balk at our needs. So once I have the new fixture cut I'll be ordering some rings made since its not cost effective to just get one, so might have a few extra raw rolled rings if someone needs one for a custom setup.

Also yes all the radial exhausts from WWII that I recall were mostly formed sheet and welded. Maybe not all. They all require some pretty serious specific geometry in any event. When making thousands of them seems a stamping process is far more reliable and less force required.
Last edited: Feb 29, 2020

Sockmonkey said:
The Rare Bear is a well-known enough plane in aviation circles to have plenty of articles on it, so it's a place to start looking.
Click to expand...

Nothing like starting big, Wright R-3350 Duplex-Cyclone of about 4,000 Hp to design exhaust for a 60 hp engine. Reminds me about the mouse climbing the elephants leg with sexual assault as it's goal.
T

All the ring exhausts I have seen were sheet metal shaped to fit a buck. Welded together. The main ring is probably three diameters of the individual cylinder tubes. Just like any exhaust, more cylinders feeding it, you need room for combined. Constant size is just a choke. Probably 20% loss In power but would be quiet.

Some cylinders will likely perform better "not" associated with others. Some cylinders should not share with some others on the exhaust ring. This would take some looking into but I don't remember seeing a round motor exhaust were all the cylinders collected into one. Remember some cylinders will have both valves open at the same time other cylinders are exhausting. It may be best to avoid have those cylinders on the same collector.

I guess all the one's I'm thinking of are blown engines so maybe it isn't as important in a n.a. 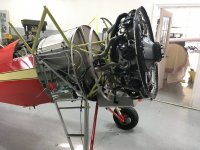 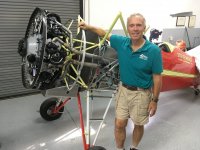 Verner with one three into one and three two into one.
A

I've seen some interesting vids of 2-stroke expansion chambers welded up "flat" and then inflated with high-pressure water from a jet-washer.
The radial is more complex, but I'd love to try making the ring out of sheet and inflating it.

If I were doing this:
Either find suitable bends to use, or get someone to roll two 180's to weld up. A full ring is probably really difficult (expensive) to roll. The ring would be 2-3 times the diameter of the cylinder stubs. Bigger than gas flow suggests to get an expansion chamber effect. Expansion joints will be needed for reliability. having the stubs slide into sockets on the ring seems worth trying. They may stick if too tight, rattle if too loose. The tailpipe(s) should be sized properly. For a five cylinder, a little bigger than the stubs.
A

The ring will increase in length / diameter when hot.
Joints may be a problem.
P

AdrianS said:
I've seen some interesting vids of 2-stroke expansion chambers welded up "flat" and then inflated with high-pressure water from a jet-washer.
The radial is more complex, but I'd love to try making the ring out of sheet and inflating it.
Click to expand...

GM makes the frame for Corvette (and now many other structures) by IIRC placing bent-to-fit seamless tubing into the form and then hydroforming to final shape.

I would suggest doing a the pair of ring half fab by stuffing 2 sections of largest diameter needed with sand/grit, packing very tight (tamp with bottom already welded shut, the top up, tamp some more and weld that end) then roll the them with enough straight excess on ends to reach clear of the third roll. Cut off the ends, drain the grit, then plasma cut strips out of the inside to the difference in diameter for before and after stub entry. Then, use band clamps to shrink the tube back together, weld seam then cut windows for stub entry at the tapered transistions. Use mandrel bent OTC bends to turn the full dimension bottom of the rings into the tailpipes or augmentors.

Slightly less elegant, but not needing the serious skill of making short transitional tapers would be to make the whole (half) ring one long taper by making the reducing strip one long taper. The third option would be to make the between cylinder sections of correct diameter and fab the entry tapers as short cones in between ring sections. If you wanted some kind of expansion joint, that would be accommodated at said intersections.
Last edited: Mar 1, 2020

I would do three into one and two into one, as indicated in post #14. A ring will serve no purpose, will be impossible to service without removing the engine, will be difficult to build and fit up, and will need frequent servicing due to thermal expansion stresses, unless you make it very thick, which will increase the difficulties mentioned above. If strictly for looks ( which I don't care for in an airplane), bolt a fake ring across the bottom to hang the oil catch can from.

Thanks, all. The ring wouldn’t just be for looks but to direct exhaust gasses and noise away from an already noisy and windy open cockpit. I would probably start with stubs but the ultimate goal would be a ring and a single downward exhaust outlet. Treating the ring as a common expansion chamber for all the cylinders, is there a rule of thumb for relative stub : ring : outlet diameters or volumes?
2
You must log in or register to reply here.
Share:
Facebook Twitter Reddit Pinterest Tumblr WhatsApp Email Link