Pulling versus pushing - which way is better?

Coming soon to a lake near me.

Yes, but is it "pulling up" or "pushing down"

Ah, the Cheyenne. Army dreams of what might have been....

Rather have that 400+ pounds of wrecking ball leading the way or following for that meat sandwich effect?

Coming soon to a lake near me.

akwrencher said:
Yes, but is it "pulling up" or "pushing down"

This reminds me of the early days of rockets. Many were convinced that if you put the engine in front the rocket would be stable, i.e. pendulum stability. But, in reality it doesn’t change anything from a stability standpoint. The stability flying through air only cares about C.G. and C.P. locations, the location of the engine is irrelevant all else being the same. The downsides were a high velocity hot jet impinging on the rocket body, which causes all sorts of issues. That was quickly abandoned and the rear engined rocket dominates, because it works well. Pusher versus tractor with all other things being equal is essentially the same, for stability the air doesn’t care.
The problem with the stability question is that it is nearly impossible to move the prop from the front to the back without changing other factors. Pushers tend to have the prop up higher to provide ground clearance. You commonly have thrust lines well above the center of gravity, while tractors are typically close to the C.G. So pushers tend to have greater pitch changes with power changes. But, in certain situations the pushers make sense and if the designer does their job the stability isn’t an issue.
I’m currently designing a pusher, because it fits the mission of outstanding visibility for me, at low to moderate speeds, for site seeing / fun flying. If I wanted to go fast and far I’d be designing a tractor.
Last edited: Aug 15, 2021

DaveK said:
But, in certain situations the pushers make sense and if the designer does their job the stability isn’t an issue.
Click to expand... 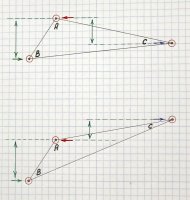 rotax618 said:
Unless the prop is right at the end of a finely tapered fuselage it is nigh impossible to get a clean smooth enough inflow into a pusher, naturally a prop on the tail introduces many problems (driveshaft TV, clearance on rotation, ingestion of FOD), burying the engine in the fuse or tail introduces another huge set of problems (cooling, autorotation for spin recovery etc).
Its no accident that most aircraft have the prop on the nose.
Click to expand... 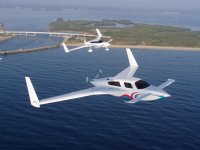 If you have an exactly comparable tractor prop airplane (engine, weight, wing loading, speeds at altitudes), then you can stack them up and look at test data. You know, like looking at all of the F1 airplanes in any one year. Back when John Bohannan was campaigning his Pushy Galore against all those tractor engined airplanes, he did come second once and third once. All of the airplanes in that game have been tractors ever since.

Then there is the Beech Starship, which really struggled to even approach the target speeds. A lot of work went into increasingly large numbers of prop blades and fancy blade designs to make the props work reasonably well back there in the wash off the canard and the wing. Then there is the P-180 and its iterations, with the props on the back of the main wing, operating in the wake of the canard and wing. Not nearly as fast you would expect from the power, weight, and wing area.

For all that effort, Burt went back to tractor props. Catbird won the CAFE event a couple times and set a bunch of speed records. Tractor single. Show us a faster 210 hp five seater. Then the Boomerang tractor twin is much faster again. Show us a faster five seater on 410 hp and with pusher props.

Stick the prop in the front to fly faster on the same power and with a lot less fuss getting the prop worked out.

Is speed better? One quote from a pilot I very much respected "speed is not your friend". So maybe visibility is better and you get better visibility in a pusher for a relatively small price in speed?

IMHO you can't just move the prop from the from the front to the back and get a fair comparison.

Aerowerx said:
IMHO you can't just move the prop from the from the front to the back and get a fair comparison.

Well, assuming designers have already been doing that optimization where we would expect (racing, going for records of various kinds, etc), in what area are pusher designs dominating today?
H

wsimpso1 said:
Show us a faster five seater on 410 hp and with pusher props.
Click to expand...

One obvious benefit of rearmost mounted props is, the Prop noise is behind you.
George
P

First of all: the Otto Celera is a flying airplane built by a genuine rocket scientist. If you give some thought to the numbers, it blows away ANYTHING else with that kind of payload and speed....ever built. In other words: all of those "expert" aerodynamicists should re-hang their shingles and honestly advertise as "expert-pre-Otto" aerodynamicists.

Secondly, remember the homebuilt that flew around the world? Ran on the rear engine and as with Celera - not an incremental but orders of magnitude more performance than status quo.

Side note: worth noting the airplane with the max range and endurance record before Voyager was a 1931 Packard diesel. Otto used a RED diesel to show us what speed vs. payload vs. ranges vs. power is now defined by. Also: one of the most impressive slightly larger airplanes was the Junkers twins that flew the Argentine air mail routes in the '30s - also diesels (Junkers 205). Think their distance and endurance records still stand. All tractors, though.

So: as much as there are dozens of tractor designs that I REALLY like, when it comes to optimized aerodynamics, pushers have proven their superiority in a few big ways.
Last edited: Aug 15, 2021

A pusher prop has its shortcomings:
The airflow velocity field over the prop disk is complex due to the aircraft interference. If the prop is behind the wing, there is an additional problem: the propeller blades cycle between high pressure under the wing and low pressure over the wing. If the propeller is metallic, that may be a fatigue issue. Cooling of aft engines is in general more difficult.
Other than those issues, both configurations - tractor and pusher - are viable. Pusher props are very convenient in UAV's: the nose is free for the installation of cameras and other sensors. Performance wise, pusher props in principle can be more efficient because they get airflow at lower speed (decelerated by the fuselage), and as we know the lower the speed (or advance ratio) the higher the thrust, everything else remaining the same. And yes, rear props add to longitudinal/directional stability.
Prop efficiency is an important factor. May be more important than the pusher/tractor choice. The curious fact is that the vast majority of metallic and wood props today are based on the old, not-so-efficient Clark Y profile (rear side flat). I would evaluate using a state-of-art, adjustable pitch carbon propeller with a better profile. And an extra little gain in performance can be achieved if the prop leading edge can be polished.

Vigilant1 said:
In single engine mode, the Cessna 337 performs better on the rear engine than the front one (better climb rate, etc). But, we need to be careful in drawing any broad lessons from this. The Skymaster performs better on the rear engine because the air inflow field to the rear prop helps to reduce drag on the rather blunt (compared to a plane with a 'regular" empennage) aft end of the fuselage. If the rear engine is dead, there's a lot of turbulence back there. So, it's not a case of the rear prop itself being more efficient than the front prop.
Click to expand...

I think the 337 incorporated all the disadvantages of both tractors and pushers.

rotax618 said:
Unless the prop is right at the end of a finely tapered fuselage it is nigh impossible to get a clean smooth enough inflow into a pusher, naturally a prop on the tail introduces many problems (driveshaft TV, clearance on rotation, ingestion of FOD), burying the engine in the fuse or tail introduces another huge set of problems (cooling, autorotation for spin recovery etc).
Its no accident that most aircraft have the prop on the nose.
Click to expand...

Dan Thomas said:
I think the 337 incorporated all the disadvantages of both tractors and pushers.
Click to expand...

As did the 336, but getting rid of the weight and maintenance issues of retractable landing gear made it into a REALLY nice bush plane. Great payload, easy to load, level floor, etc. Never heard of one on floats - for obvious reasons, but almost everything in the North already has some kind of runway summer and winter - just not at breakup.
H

Lendo said:
One obvious benefit of rearmost mounted props is, the Prop noise is behind you.
George
Click to expand...