Riggerrob said:
Or, you could install thousands of tiny venturi that try to suck air back into the airframe.
Click to expand...

You could, but they would suck in a lot of bugs and crud and be a pain to clean. A single big intake up front is easier to have a centrifugal filter on.
R

Sockmonkey said:
You could, but they would suck in a lot of bugs and crud and be a pain to clean. A single big intake up front is easier to have a centrifugal filter on.
Click to expand...

Riggerrob said:
Or, you could install thousands of tiny venturi that try to suck air back into the airframe.
Click to expand...

NASA tested this in an airplane, wing skin was full of tiny holes, the turbine sucked air through it, in an attempt to control boundary layer. When I retrieve the info, I'll let you know. Blessings +
Z

Aerowerx said:
Frost buildup would be a problem.
Click to expand...

Stream an additive into the exhaust, the sort that’d counter the temperature effect (proportionally)… &, perhaps, extenuate the ‘expansive’ naturals of the two (or more) ingredients.
A

Like, maybe, jet-A? In chemical reaction with free air and maybe spinning a modernization of a water wheel?

There's a great quote on Experts.

"Always listen to experts. They'll tell you what can't be done, and why. Then do it.". ― Robert A. Heinlein

Which I do believe!
Unfortunately I also believe in invisible things like drag and entropy.

But with a powerful enough MacGuffin and some unobtainium, you can do wonders!

For example, if you inject antimatter in the ducts, and line that area with photovoltaic cells optimized for gamma frequencies, you'll get Plenty of thrust and power to recharge your cruise batteries or iphone.

Best if you use radiation proof Tomasite plastic for everything, especially the crew compartment.

If you can find the multiversal sales portal, order me a few repelletron units for my project, please. That's the Victor Appleton Jr. 'verse.

While we are in orbit here I would like to join the conversation with a down to earth proposal.

The question of the original post "What am I seeing here?" was answered in the second post "Dyson Fan".

The general consensus is that the proposed Dyson Fan propulsion is a poor design choice. I accept that premise and go on from there.

The question then remains "Is there another way to create a ducted fan without the typical rotating blades of a fan."

The answer is "Yes".

The next question is "Why?"

The answer is "Fan blades make a lot of drag when stationary or when rotating slowly so as to not produce thrust."

Now to the question of "How?.

It is a well known fact that flapping wings create both lift and thrust. It is also noted that humans are very poor at understanding and making use of that fact.

Prior knowledge has demonstrated that flapping propulsion can be produce in many ways and is not limited to the normal biomechanical central body hinges generally found in wings of flying insects and birds. A rigid airfoil translating perpendicular to the free stream flow can also produce thrust as is done with the caudal (tail) fin of swimming mammals and fish. Furthermore, the theoretical studies reported in papers such as “The Technological Prospects for Oscillating-Wing Propulsion of Ultralight Gliders” ; AIAA Paper No.74-1028 by Jerzy Wolf and the prior work (reference 7 ) reported in NASA CR-235-15 , 1972 “Pseudo-Ornithopter Propulsion” predict that morphing, twisting and incidence changing wings are not necessary. This principle was further demonstrated by the practical physical demonstration in retail products such as the Trampofoil (TRAMPOFOIL®) and Aquaskiper ().

The benefits of this arrangement are a balanced rotary motion and an accelerated flow field both within and without the duct for a greater propulsive efficiency than the typical ducted fan that confines the accelerated flow to the fluid that passes thru the duct.

The driving mechanism for the circular motion could be contained entirely within the containing ring of the duct making a very simple and unique free floating vehicle.

There is a YouTube video about a model airplane flying with an ordinary front propeller, and with a centrifugal fan inside fuselage, producing an air jet. Results seem similar, thrust from centrifugal fan being less, but common propeller version in appearance exhausted battery earlier. The concept looks interesting as having the possibility of being silent, also heat from an IC Engine cooling and exhaust can be added to the low speed propulsion jet to increase thrust.
If I found a fan powerful enough, I'd test this, but even if very large axial fans used in tunnel air circulation exist, it's not that easy finding an adequate power centrifugal fan. Blessings +
Last edited: Oct 4, 2021
H

jedi said:
The driving mechanism for the circular motion
Click to expand...

=some scatch ? (for better understanding)...

We use cooling fans a lot in our industry.
Centrifugal (drum) fans are far more common and effective than the propeller type.

I don't know why that is, or how they compare efficiency wise - do any of you?

The axial fan or propeller will move a larger volume with a lower pressure rise.

The centrifugal fan will create a higher pressure increase but a lower volume of flow for the same power input. As noted it the video of post # 67 this has a lower propulsive efficiency and requires more power to get the same thrust.

If the fan is static, not moving thru the air but sitting in a room, the higher total pressure rise of the centrifugal fan results in a greater exhaust velocity which gives the appearance of a more powerful fan.

The model shown in post # 67 could be made more efficient by using the NASA flush inlet design*. For a motor glider this would allow a movable inlet ramp and variable exhaust nozzle for a clean power off glider. The down side of this is the larger fuselage volume to contain the fan and motor and the increased weight of the larger motor and increased fuel requirement.

My studies have determined that the trade off is not favorable (or of limited benefit) for the centrifugal fan in fuselage design in agreement with the post # 67 experimenter.

* This configuration could have flush inlets on both sides of the fuselage with a double squirrel cage fan or single double sided fan with a belt drive arround the circumference of the fan.

The fan axis would move in a circular orbit to create a rigid flapping circular wing duct in accordance with the Pseudo-Ornithipter theory of reference #7 (NASA CR-2315. 1972) of the first Jerzy Wolf report reference in post # 68 above. In other words convert the linear motion of the Trampofoil to a radial motion of a ring wing.

I hope that helps.

I find it difficult to imagine a benefit for the circular arrangement but it would likely be an improvement over the design of post # 1.
Last edited: Oct 6, 2021
H

Some sailboard racers use a few flaps/oscillations for propulsion as they complete turns. To that end, judges limit them to 2 or 3 pumps.

Looking from the front the axis of the duct would describe a circle.

Looking from right to the left at the section at the top of the duct, the section would oscillate vertically as in the Jerzy Wolf paper creating thrust. It would also oscillate horizontally (right and left in the front view) having no aerodynamic effect.

The circular motion of the duct could be produced by an orbital motion of a weight such as batteries for electric propulsion.
Last edited: Oct 6, 2021
A

There's a YouTube channel of a guy pumping ( jumping up & down while changing pitch ) foil boards on the N.Y. Lake he lives on. No sail or kite, just a jump on or bungee launch and his buddy/so drives a jet ski so he can ride the wake.

Decades ago, my Father taught me to pump a canoe by standing just off center and using my legs, you can get a lot of speed that way. Pretty high energy output needed.
H 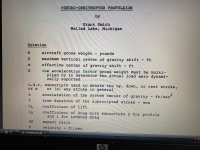 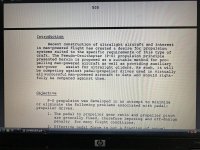 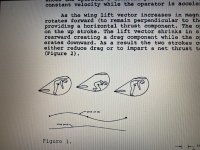 -iff we want to involve superefficiency oscillating thrusters we should work on the base
of NONSTATIONARY aerodynamic...(it is nonlinear,very complicated)...

ing. Toporov in weavy fly have get circa 30 % better effective L/D...