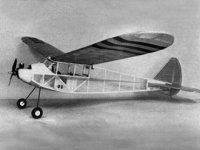 I love how it has a very familiar vertical tail to those of us who already know about the big Fly Baby.
T

It was indeed a special airplane...and one has to dress up when flying it. 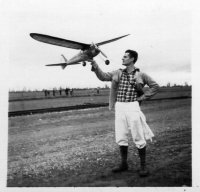 It is time to don the flying breeches!

I seem to remember Ron W. mentioning a never-built high-wing Fly Baby in the context of the biplane variant. Do any sketches exist of what Pete Bowers had in mind?

cluttonfred said:
I seem to remember Ron W. mentioning a never-built high-wing Fly Baby in the context of the biplane variant. Do any sketches exist of what Pete Bowers had in mind?
Click to expand...

"Later on, when it was decided to use three different wing arrangements for versatility, the designation was expanded to "Fly Baby 1A" for the low-wing design, "IB" for the same fuselage with a new set of biplane wings, and "1C" for a strut-braced parasol monoplane wing fitted to the biplane center section." (Sport Aviation December 1962, Page 6)

As far as I'm aware, this is his only public notice of a potential parasol-winged version, and I don't think he produced any sketches. I think it came from a brainstorming session or something... in the light of day, it seemed less and less of a good idea.

Nothing WRONG with a parasol configuration, of course. But like the biplane and float setups, Pete would have wanted to be able to switch between versions with a minimal amount of fuss (the swap to biplane wings takes an hour). But the stock fuselage would have needed some modifications that would have complicated such easy swaps.

The easiest way to accomplish this is to built a Fly Baby biplane without a lower wing:

The struts would attach to the STA 3 and 5 bulkheads, where the monoplane wing spar is connected to the fuselage.

However, the wing loading increases quite a bit. The monoplane Fly Baby has 120 square feet of wing area, and the biplane 150. This would put this version at roughly 75 square feet... call it 80 with the center section. That's just 2/3rds of the area of the monoplane. Wing loading changes from 7.7 lbs/ft-sq to 11.5.

That in itself is probably OK. Since the plane is now strut-braced, the landing gear can be changed to incorporate some shock absorbing capability. But it would now have wing loading almost twice that of a J-3 Cub...it's not going to be the gentle airplane it was before.

[slapping one's chest] Of course, we pilots would have had no problem with higher wing loading. It's more than a Luscombe...but heck, still a couple of pounds shy of an RV-8.

Use the monoplane wing for the parasol? The problem there is that the biplane wings are swept to put the center section forward of the cockpit to allow access. Using the stock, non-swept monoplane wings would put the wing directly over the cockpit, making getting into and out of the airplane an awkward crawl.

Sure, other parasol-winged airplanes have shown the access issues can be handled. But it would probably require raising the wing...which would require a whole new center section. Scratch even more of the "re-use biplane parts" paradigm.

Finally, no matter where the wing ultimately ends up, connecting the stick to the new ailerons will be interesting. The Fly Baby monoplane and biplane uses pushrods for aileron control. An entirely new control system would be necessary for the parasol. Again, the issue has been solved by any number of high-wing light airplanes. But yet ANOTHER stock Fly Baby system would need to be modified.

Certainly within the state of the art... but it would AGAIN require a modification to the Fly Baby fuselage. Switching back and forth between the low-winged monoplane, biplane, and parasol configuration wouldn't be the simple process Pete envisioned.

So while the Fly Baby could be quickly converted from monoplane to biplane, and from monoplane landplane to floatplane, Pete probably realized that his vision of a quick swap to a parasol configuration was not in the cards. So it was quietly dropped.

A few years ago, it struck me that conversion of the Fly Baby to a mid-wing would be a lot easier. The stock monoplane wing could be used, connecting to the same parallel bulkheads (attachment points raised a couple of feet). A kingpost would be needed, but the flying wires would be at a much better angle, giving some margin. Aileron connectivity would still have to be solved, and you'd have to build in a ladder for cockpit access. but it does make a neat faux Morane.....