The thread about the scaled P-38 reminded me of a local WW II pilot. Jack flew P-38s before transitioning to P-47s. He had one brief familiarization flight in the P-47 before his first combat mission with it. Jack is still sharp mentally, and in good shape physically.

I recently saw a drawing for a scale replica of Jack’s P-47.

BTW, the thread title refers to people, not airplanes.

Like your friend, my friend’s dad flew P-38 Lightning’s and he loved them, but after several mishaps, there weren’t enough left to assign him one, so they put him a P-47 Jug (Thunderbolt). He hated it and was certain the world had it out for him. One day, he came back with battle damage, and when he saw how much damage he had taken and it still kept flying, he became a big fan of the Jug.
Last edited: Apr 4, 2020

Back when I was in the medical profession,I had to transport a sweet little lady to dialysis 3 times a week.
She was very quiet and kept to herself for months without saying much.
One day she saw a pic of the plane that I had just finished stuck on the visor of my ambulance.
She got to talking about her life growing up and come to find out she worked in the P47 factory in Indiana building Jugs during the war and also ferried the aircraft wherever they were needed.
After that day she was quite the little chatter box and she had an amazing life growing up from the stories that she told.
I remember her telling the story about one of the Jug pilots stopping by the factory,during his rotation,and thanking everyone for building such a rugged plane.
He had taken a 20mm shell pretty much head on and it had blown cylinders off the engine,damaged the prop and tore the whole plane up pretty good...but it still brought him home.
She said he shook ever persons hand in the factory and didn't miss a single person before he left that day.
I don't remember the pilots name but I know that story of the pilot taking the 20mm shell head on has been told numerous times since the war....and that story is absolutely true because Betty met the man in person and had a picture of them standing together beside a Jug she was about to ferry out.
That goes to show....never judge a book by its cover...people have some very interesting stories to share.

A friend / homebuilder / former neighbor flew P-47s. On his first combat mission, strafing vehicles on a major road through a valley, he flew wing on the squadron commander. He returned to base with an airplane full of holes, while the commander had none. On debrief, the commander explained that with max military power and the dive to set up the strafing, the AA guns could not slew fast enough to track the P-47. My friend, who had used normal full throttle, said that he had been trained to use max military power only in an emergency. The commander replied, “Son, anytime people are shooting at you, it’s an emergency.”

After the war, he got a degree in Aeronautical Engineering, became an engineer for NACA/NASA.

Was that Kit Carson?

plncraze said:
Was that Kit Carson?
Click to expand...

No, his name is Mike Cannon.

But Kit Carson would have been an interesting person to have known. See his thoughts about some of the WW II fighter aircraft here American fighter ace & Engineer "Kit" Carson criticizes the BF109E/G and FW-190.

Cool! Kurt Tank did a heck of a job. Thanks for posting this.

Not quite ‘an old thing of value’ but I just ran across some of my old documents, including the old 1976 staple bound paperback Airman’s Information Manual parts 1. 2, 3 & 4, along with approach charts and my old Los Angeles, San Francisco, Denver, Houston, and Phoenix Sectionals and TCA Charts from the same period. It’s amazing how clean and simple the airspace was back then compared to today’s charts.

No value to this, either, but peaking of “back then”, I once flew into KATL, VFR, carrying mail from a local, large corporation, to the airmail depot.

Airline traffic was easy to spot, because each airliner had a long streak of black following it. All the controllers spoke understandable English, and were more than willing to give progressive taxi instructions.

BJC said:
I recently saw a drawing for a scale replica of Jack’s P-47.
Click to expand...

The exact scaled replica of Jack’s P-47 is well under way. Looks good. Will be powered by a Verner.

bmcj said:
Not quite ‘an old thing of value’ but I just ran across some of my old documents, including the old 1976 staple bound paperback Airman’s Information Manual parts 1. 2, 3 & 4, along with approach charts and my old Los Angeles, San Francisco, Denver, Houston, and Phoenix Sectionals and TCA Charts from the same period. It’s amazing how clean and simple the airspace was back then compared to today’s charts.
Click to expand...

I have a copy of the Los Angeles Times, dated 13 April 1981, and on the cover was space shuttle Columbia climbing off the pad on its maiden flight! I have kept that copy sealed, and given that the shuttle's maiden flight inspired me to love anything aerospace, I take a look at it from time to time to motivate me!!!

bmcj said:
Not quite ‘an old thing of value’ but I just ran across some of my old documents, including the old 1976 staple bound paperback Airman’s Information Manual parts 1. 2, 3 & 4, along with approach charts and my old Los Angeles, San Francisco, Denver, Houston, and Phoenix Sectionals and TCA Charts from the same period. It’s amazing how clean and simple the airspace was back then compared to today’s charts.
Click to expand...

Those were not old documents. I still have my Narco coffee grinder radio.

I have a couple of cool aviation artifacts.

One is an Astrocompass. I don't know this particular one's history. But, I know that they are even still sometimes used in regions of magnetic unreliability (like parts of Alaska and northern Canada) to determine true course in order to correct for compass precession when using HSIs in the "un-slaved" mode. Pretty cool!

The other one is an old Airpath wet compass that was given to me by Don Lee. I went up to Alaska Floats and Skis about 6 years ago and did their 5 hour "Bush Pilot" course. It was a blast. One day after flying, I volunteered to go with Don to get Avgas for the float planes in the famous old blue Chevy pickup that once belonged to another famous "Don". While we were there, we went over to the Sheldon Air Service hangar to find a used part he needed. He dug this old wet compass out of a pile and said something like, "here, maybe you can get some use out of this old thing. It ain't doing anyone any good here." -I thought that was pretty cool! 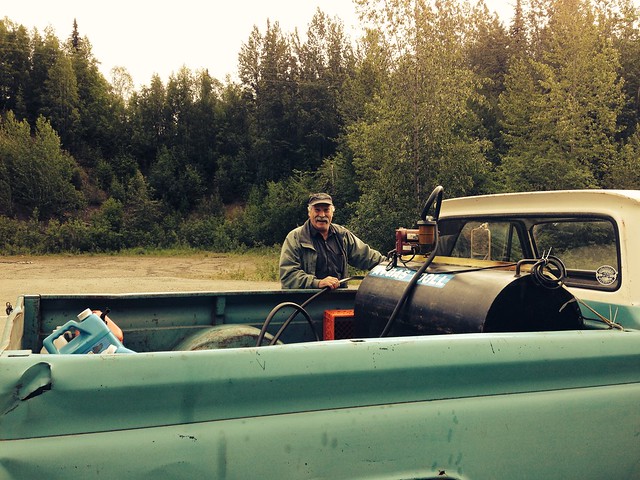 Walking in the woods one time and found an old iron cooking pot. Inside the pot was an old large bubble glass compass. Gave it to my neighbor that had a 1943 Stearman. Cleaned it up and looked almost new.
Just like this one.

You are bidding on a bubble face airplane/aircraft compass manufactured by the Pioneer Instrument Company. Please let me explain I am not an expert on aircraft instruments, so if I have mis-stated a