TarDevil said:
Wish I were younger!
Click to expand...

Even without the Sonex announcement, I often wish I were younger!
V

Daleandee said:
Well we'll just have to see about that but you're correct ... it does appear that is what it is. I did see this that shows some numbers (subject to change of course):

As far as the specs, it seems to be a 120% scale Sonex. Wingspan, wing area, gross weight, minimum HP: all are about 20% larger than stock Sonex numbers.

I think it will be popular. I'm glad to see this from Sonex, I was under the impression that their jet and any government work was their focus, to the exclusion of the small stuff. I'm sorry to see their newest plane doesn't have a VW option, but John Monnett may yet give us an extended wing/folding wing mod for the existing legacy/Ver. 2 Sonex airframes. I don't know that, but would like it.
And, not to forget, the VW powered Sonerai family is still being offered by Sonex.

saini flyer said:
Based on the drawing above , it has a yoke!
Click to expand...

Or they used an 'off the shelf' (existing) CAD construct of a human seated in an airplane...

Having said that, sticks in a high wing do make it a little less convenient to enter/exit, compared to a pop top.
V

I'll bet Tundra tires will be an option!

No, they already said it wasn't a bush type aircraft. I doubt anything bigger than 6.00 x 6 will be used. Sonex uses the wrong airfoil for low and slow stuff.
R

I'm considerably smaller than the old FAA 'norm' (~150 lbs), and I still find the Sonex cockpit a bit too cozy for two.

The logical market is the typical Bubba'd-Up American. As a culture, we're a bit taller than 50 years ago, and about twice as wide. Then there's the fact that Bubbas and older pilots struggle to get in (and more importantly, out) of low wing a/c where you must climb down to get in and climb back up to get out. High wings are just easier in the in/e-gress areas. The market is, well, bigger.

It says in the video that it has a stick -- no yoke.

saini flyer said:
Based on the drawing above , it has a yoke!
Click to expand...

As Cy V stated, it will have a stick. Center stick will be out the door first. Dual controls based on demand.

Just based on observations but;
Do they really need dihedral on a high wing?
All the junction work to get that little bend add a surprising amount of weight to the spar.
Bede got away without dihedral, although to be honest, the wing does dihedral in flight...
If you look at the Tailwind video, you realise the only wing related thing going through the cockpit, is one steel tube in the roof.
It would take an engineer to crunch all the number for comparison, but while a single strut might knock 5~10kts off your top speed, your payload would go up significantly (and you could put in dihedral without thinking about it)
As for control layouts, as an instructor, I've had to climb in and out of planes enough to know that twin sticks are a pain in the butt, to say nothing of how awkward it is to do stuff (maps etc) in your lap with a stick there. I've also never been a great fan of steering wheels in aeroplanes, so my 'goto' trainers have usually ended up with some form of centre stick.
Our own Aussie Lightwing; 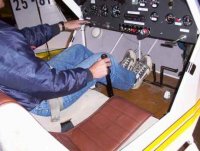 And the now popular Foxbat (with a Y stick);

Definitely head to head with normal 2 seat RVs which will put it in the ballpark sakes wise for the new RV.

How much dihedral is perfect is different than useable. Perfectly flat wing may or may not have enough. Depends on how much roll you want with the yaw and how much adverse yaw the ailerons make and how much pitch coupling the yaw makes. I had an RC plane that had horrible pitch couple to yaw. Rudder made the plane pitch down bad. Not enough dihedral. I added some winglets which got rid of most without having to take the wing through a bandsaw. Except for aerobatic planes, most tend to require attention to keep coupling at bay in all axis. You have to handle ease of build to ease of flying. Better flying tend to have to get all angles where they need to be. Easier building is hoping there are no angles.

pylon500 said:
Do they really need dihedral on a high wing?
Click to expand...

pylon500 said:
I've had to climb in and out of planes enough to know that twin sticks are a pain in the butt,
Click to expand...

My airplane has side-by-side seating with two sticks. If the sticks are causing one a pain in the butt while entering / exiting, then one is not using the proper, and easy, technique.

....they probably bought a set a of BD-4 plans and went from there!

thjakits said:
....they probably bought a set a of BD-4 plans and went from there!
Click to expand...

I'm just not seeing the BD-4 likeness. Construction certainly is not the same.
Tailwind, yes.
E

TarDevil said:
I'm just not seeing the BD-4 likeness. Construction certainly is not the same.
Tailwind, yes.
Click to expand...

I think the h/w Sonex is ugly as sin....says he who is rebuilding his BD-4 into a tail dragger...

Erik Snyman said:
I think the h/w Sonex is ugly as sin....says he who is rebuilding his BD-4 into a tail dragger...

If you fly one they'll start looking better to ya!

Anyone wanna buy my boat?

A center stick is convenient for sure, but it likely deprives at least one of the occupants from using their preferred hand to fly it. If you have a right-handed instructor and a left-handed student... then no problem. If you have two right-handed people on board then one of them is going to have a harder or less intuitive experience. Yes I know we RH pilots are able to fly our Cessna style yokes with the left hand, but if you have a stick in the airplane then you should be able to fly it like a stick.

Getting in and out of the airplane is not as important as how it flies and how much you enjoy it once you are in it.

Victor Bravo said:
Getting in and out of the airplane is not as important as how it flies
Click to expand...

There are circumstances where getting out would be more important than anything!
But I understand your intent. I personally would prefer two sticks. I don't think it's that much of an impediment and would enjoy having the stick where it feels natural.
E

Erik Snyman said:
I think the h/w Sonex is ugly as sin....says he who is rebuilding his BD-4 into a tail dragger...