New member from the UK

Welcome to the forum and good luck with your changes!

Welcome to the group and lets see some photos of that project!

Well guys, I have actually been getting on with stuff! I started fabricating a differential braking system, using the existing (and 'orrible) Band brakes but I didn't have sufficient alumin(i)um to make the heel brake pedals. So I started on fitting the Rotax 503 DCDI motor in place of the 447 single carb.

So, the issues arising from this are as follows:

1. Its bigger! Not a lot but it is. Annoyingly the 4 mounting studs (8mm dia) are 8mm further apart than on the 447. In practice, this means that the rear pair of mounting holes in the engine mount plate are close enough to form a figure 8 hole! So a new plate is the neatest option - see photo 1.

2 The longer motor together with twin carbs requires a bit of surgery on the left side of the fuselage. 40mm to be cut back! Fortunately this is non-structural so it just requires some neat jig saw work and tidying up. See photo 2.

3. I had one of my M5 Starters fitted on the 447 and this did require further surgery in the form of cutting a pocket in the inner skin of the fuselage side. The extra length of the 503, actually eases this situation as it's further back and thus the fuselage is a bit wider, meaning less relief (if anyone was fitting one with a 503 from scratch) - Did I mention that I make the M5 Starters? - See photo 3

4. The overall size of the 503 means a tighter fit all round including the area of the cooling shrouds. The existing cooling system of the enclosed engine Minimax is (in my opinion) a bit random. Fan cooled Rotax 2 strokes require an adequate supply of cold air directed in through the rear facing fan housing where the fan forces it around the cylinders and over the heads and out over the carburettors. Cold air currently enters the cowling though a hole in the front and a small scoop. I'm going to make a scoop that fits over the fan housing and directs air straight in via an enlarged scoop in the top cowling (yet to be done). See phot 4 - this is just a quick piece of card in the rough position of the new cut out. 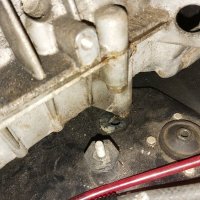 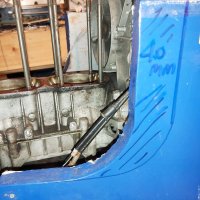 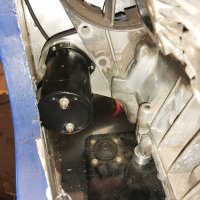 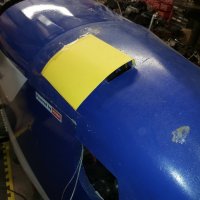 From your screen name... did you fly or own a D9 Jodel?

I used to have one, but I sold it about 5 years ago

I used to fly an open cockpit D.9 and enjoyed it immensely, even in mid-winter. It was while flying this a/c that I actually 'mentally designed' much of the subsequent Flitzer Z-1 which used exactly the same wing area of 97sq' and which came about by attempting to re-create the fine handling of the D.9, but with an aeroplane having smaller component parts, (as well as my having a love for biplanes). Overall span of the Z-1/21 is 18' while the longest individual component is the fuselage at 11'3" although the Flitzer Goblin's is just over 9'.

The prototype Flitzer, when initially flown, used the same 1600cc VW motor (later increased to 1834cc), retrieved from that D.9 which had been sold and was subsequently crashed by its new owner after I had delivered it for him.

Interesting. I really like the Flitzer; a pal of mine built one with a Rotec Radial, but he found it a handful and sold it on (Dudley Pattison). I recently built an 1834 with dual electronic ignition and a Honda CBR alternator for a customer. Shame about the D9!

Duds' Flitzer Z-1R is a totally different machine from the 'standard' Z-21. It's based on the fully aerobatic, four-aileron Z-1S with mass and aerodynamically balanced controls which was designed initially for a French aerobatic pilot. A few further Z-1S types were built, in Germany and the UK - sadly the UK example (UL Power 97 hp.) was written-off a few years ago in a sharp runway excursion - no brakes on that one. It is intended that it will be rebuilt however.

The Z-1R was developed especially for the R2800 radial. Due to the relatively high weight (220 lbs basic) of the R2800, stagger was drastically reduced and the lower wing chord and span was increased to match that of the upper wing, providing greater spar depths and more wing area. Fuel capacity was substantially increased. Another Z-1R flew in France but the builder had no experience of relatively powerful, open cockpit biplanes and had also connected his pitot static system in reverse. Having no idea of the 'picture' he was looking for on approach and with no IAS he hit hard at close to Vs and started to cartwheel, breaking the starboard wingtip, but flew out of the situation.

He re-flew a circuit and made another hard landing but survived, only to write the aeroplane off later doing high speed tail-up runs and throttle slams, experiencing considerable precession due to the steep ground angle of the machine (it had a 2 metre propeller) while experimenting with brakes. He performed this exercise for about an hour, until inevitably, gaining in confidence he lost control and wrapped it up in a spectacular ground loop and somersault. It remained in the corner of a hangar at Abbeville for a while but has since been removed.

The new owner of the UK Z-1R, G-ZIRA, enjoys practising aerobatics with that machine but it is currently undergoing repairs at White Waltham following some gearbox issues. It is a superbly-built aeroplane and a credit to Duds' workmanship. Many other Flitzer development types are underway across the planet, including the Flitzer-Laird LC-1W, Stormcock, Meteor, Z-2 Schwalbe two-seater, which will be equipped with the 124 hp direct-drive Verner 7U radial, F.2 Tiger, F-4, etc.

May shop is crammed with parts of various Flitzer evolutions to the point where I need therapy! :0)

I admire your dedication! I built a Streak Shadow back in 1989 but took 15 months because I had another Shadow to fly. I learned from that; I'm a flyer not a builder. Having my SSDR Minimax in pieces is very frustrating, but I know it will be so much better when I get it back together. At least I'm saving hangar fees!

I have virtually everything arranged to continue with the variant illustrated herewith. It was flown to good effect in X-Plane some years ago and my intention is to equip it with a Verner 5Si in due course. The basic fuselage also suits the Sparrowhawk and Laird LC-1W evolutions which also have parts in common, but more has been done to enable me to focus on the Stormcock version shown. I do have a Goblin variant commenced, which is the smallest and simplest of the Flitzer family and tempting to continue with, but I am happy that two Goblins are under construction in N. America.

Meanwhile, my old Z-1 prototype has been a hangar queen for some while, despite passing her annual Permit renewal. I am definitely in need of therapy! :0)

I think perhaps you are! I need the Minimax out of my workshop as there is a queue of motorcycles demanding my attention; we are all in need of therapy.... oh wait this IS therapy

Hi, In the UK too, West Norfolk, Modding a LMA to SSDR, builds in "Tube and Fabric"
Been in touch with Dudley, last saw him over 30+years ago when in the Oxford PFA Strut
A

bebedriver said:
I admire your dedication! I built a Streak Shadow back in 1989 but took 15 months because I had another Shadow to fly. I learned from that; I'm a flyer not a builder. Having my SSDR Minimax in pieces is very frustrating, but I know it will be so much better when I get it back together. At least I'm saving hangar fees!
Click to expand...