Stolch said:
My wife (appropriately named Amelia) and I drug home a Zenith 701 kit in the Spring of 2016 and we spent most every weekend for the subsequent three years building it. Got the Airworthiness cert in the Summer of 2019. Been flying it as much as life and the weather in North Alabama allow, which turns out to be about once every other weekend, since. It seemed quirky at first but now that I’ve got a hundred hours in it I really enjoy it, especially doors off. Hangar it and fly it out of our 1,100 ft. back yard farm strip. Mature trees at both ends. Rotax 912, 80 hp. I’m still working full time so about 50 hours a year is the most flying I can squeeze in. This is one of our Redbones. She knows she’s going to the vet and stayed frozen in that “braced for impact position“ the entire trip.
View attachment 120762
Click to expand...

She remembers the dreaded "Cone of Shame" 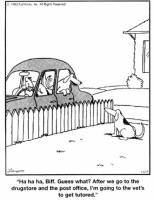 I don't know if I could ever be happy again if there were no tacos.

That redbone has the same posture and facial expression as my wife tells me I get when the FAA MIDO inspector calls !

She says that it's probably because I'm equally afraid of getting neutered.

Then she cackles while sharpening the knives in the kitchen.

She would sharpen them first?

blane.c said:
She would sharpen them first?
Click to expand...

Clean cuts hurt and bleed worse in the long run and you might not feel it when you get cut, so it's kind of a surprise...

I am quite confident my wife wouldn't "waste time" sharpening.

Add Gary Larsen's Far Side cartoons to my "I Like'... list. He was one amazing cartoonist. Here's our 701, we built it "stock" except installed the curved roof that Zenith includes in the latest 750 kit. Basically, Joe Spencer's "beanie mod." Also added the Zenith VG kit to the elevator. That's about it. "Desert Khaki" and black paint scheme. Old school steam gauges, down to the classic Waltham manual-wind clock. It was good enough for my Huey, so dammit, it's good enough for my Zenith. One vox intercom/VHF combo radio. My only concession to modern flying is an iFly 740b portable GPS, I rigged a quick release instrument panel mount and ship power. Tried my iPad mini at first but did not like it. Could not read it in the sun, then it randomly shut down on me when the sun baked it. The 740b is awesome and cheap, well, compared to Garmin products. No need or desire to fly anywhere requiring a transponder or ADS-B anymore. Those days are behind me. I'm happiest now merging into the buzzard traffic at 500 AGL in the local pattern, and going nowhere in particular. Just flying for the sake of flying. There is a gravel bar a few minutes flight from here that is calling my name. In the photo Amelia snapped (she's standing on our pack patio) I'm passing the wing over some forsythia bushes while turning into position for takeoff, the 45 ft tall trees at the far end are about 1,070 feet away once I straighten the nosewheel out. Hangar's on the left, just out of sight.

There's the quote of the day, right there

We have a crotchety old Huey driver coming to stay with us tomorrow night, I'm gonna read him that quote!

Victor Bravo said:
There's the quote of the day, right there

We have a crotchety old Huey driver coming to stay with us tomorrow night, I'm gonna read him that quote!

J.L. Frusha said:
Clean cuts hurt and bleed worse in the long run and you might not feel it when you get cut, so it's kind of a surprise...
Click to expand...

You've got experience in this?

n45bm said:
You've got experience in this?
Click to expand...

A bit. Bar fights, Boy Scouts and such. I've got scars from top of mt head to the soles of my feet. Not just cuts, but there are those, too.

Well, that’s OK, providing your bar fights didn’t happen while you were a Boy Scout. The Scouting community kinda frowns on that.

Stolch said:
Well, that’s OK, providing your bar fights didn’t happen while you were a Boy Scout. The Scouting community kinda frowns on that.
Click to expand...

My son in law is from New Zealand. Their version of Scouts, the Rovers, is for both boys and young men into their late 20s, I forget the cutoff age. A good idea, really, as it lets the younger boys interact with young men not in their own family. But the older Rovers also do things without the younger boys, so they have a bar in the Rovers den, alcohol allowed only when nobody underage is present.
M

My brother in law is from Bath, I'll have to ask him if they have Rovers in the UK. They definitely have beer, though, and that's been an ongoing topic.

I'm the latest newb...a brief hello. I am planning on finishing my license paper chase soon, just bought some land and am going to try to build a small hangar and build a plane in it. Any advice y'all have on equipping or configuring such a facility would be highly welcome. My earlier lives included construction, aerospace parts machining and assembly, studio musician work, and raising Labradors. Glad to be here, looking forward to learning as much as I can.

misterstax said:
just bought some land and am going to try to build a small hangar and build a plane in it.

Any advice y'all have on equipping or configuring s

You will receive no shortage of opinions, advice, and counsel here on this forum

"misterstax", and one of your previous lives was a studio musician... were you one of that "Big Six" crew at Stax Records in Memphis ??? (holy crap they were awesome!)

Whether you're a world famous studio cat from the 60's, or just a guy who likes airplanes... WELCOME !!!

I have been in trouble for posting my Loon BBQ in the past so... It never happened! I stick to Baby Back with Memphis Dust! We digress back to airplanes REF Meathead's World Famous Memphis Dust Rub Recipe
M

...yeah, man, followed my dog around for a week...!!! . I don't think Labrador gets enough sun to grow anemic lichens, much less champion bud...back in the 70s, there were no super-duper grow sub-cultures, the first time I saw that movie I was cringing at the thought of burnt Alpo. I have run into so many people who grow in the last few years, it's such a different world now. I'm so glad I don't smoke.

I heard one of the Stax guys passed just a little while ago, can't remember if it was Duck or Steve but I toasted a sad slug of single malt in effigy. Stax, Muscle Shoales (aka Swampers), the Wrecking Crew, the Funk Brothers...you'd be suprised, but anyplace there's any kind of media market or music venues there's usually a handful of local hot shoes holding down the best paying gigs. Wish I could say I was a part of some legendary gathering...truth is I was a decade and a half too late to participate in any of that but got to soak a little in the cultural remnants. Went to music school in Baltimore where I grew up.

I used to work in LA, mostly Hollywood. Mainly commercials, some other bed tracks like tutorials, corporate promos or soundtracks. Once in awhile showcase gigs for trust fund babies, some side work composing demos with R & B guys...this was from 1985 to 1994. Moved to San Diego, been here ever since...hard to leave the waves. Took pit orchestra gigs, jazz casuals, whatever comes up, but moved from construction into the public sector during the big crush of 2008 to stay in front of the mortgage. Watching the local chapter of the Confederate Air Force zooming around Gillespie Field has been incentive to get back to my license, and yes...that Lear crash happened just around the corner from my house.
You must log in or register to reply here.
Share:
Facebook Twitter Reddit Pinterest Tumblr WhatsApp Email Share Link