Move along - nothing to see here

don january said:
drstress. What a large amount of time spent on the web when you could have been building and sharing
Click to expand...

More than likely all these web posts would need to be accomplished to design his plane.....posting with explanation does not really take much time......and there is probably so much more that has been done but is not posted. There has to be many thousands of decisions and compromises that need to be decided and you certainly will not see a discussion of all those decisions. 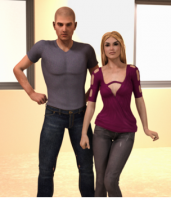 I hope you all got my attempt at humor in post 38.
Apologies if it missed the mark...

I would suggest considering the following points at concept level:

The practical version of this would look something like a single flap setting (probably what would otherwise be takeoff setting, i.e best lift) and drag being controlled by a speedbrake or spoiler of some form.

Minor oops there withe main gear being too far forward.

How did you like working with VSPAero? I've dabbled in it a bit, and it seems pretty powerful for free software. I found the modeling interface frustrating though, particularly with fuselages. Thanks for the detailed writeup, very interesting read.

drstress said:
VSPAERO is very powerful for the price, that is, it is free.

Before you use VSPAERO, you need to have some understanding of CFD because the documentation is sparse. The primary thing I hoped to get from this thread is to attract VSPAERO users to help me, and everyone else with understanding how to use it.

Trying to extract stability derivatives from the VSPAERO output is frustrating. There have been several questions posed by people on the OpenVSP Google Group about nomenclature used in VSPAERO as it relates to nomenclature found in standard textbooks. There seems to be poor correlation. The programmers of VSPAERO seem to have been writers of great code, but used their own nomenclature that was convenient to express in FORTRAN or C++ or whatever.

I am sure the information is there, but VSPAERO just isn't user friendly to someone actually designing an airplane. This is what I want from this effort. Maybe we can figure this out for ourselves, outside of an academic environment. Please don't assume I have answers to the very real questions you have.
Click to expand...

I typically do initial calcs by hand/spreadsheet and then supplement surface data from XLFR5 runs. Although XFLR5 is easy to use, you're limited in the geometry you can build, and I sometimes (often) get squirrely results. I was hoping VSPAero would be a more WYSIWYG software, but it sounds like that's not the case.
V

While we wait for someone to walk in with their VSPAERO drag results, I must admit up front I have nothing to offer in that regard. This info is a space filler until then. Honestly, since I last rode the OpenVSP horse, I’m waiting to see through your work if it is likely worth spending a lot of time for the results VSPAero will produce.

What follows may be of interest because:
a) It deals with aircraft drag
b) It contains actual values (well--estimates)
c) The project aircraft general configuration (the Beetlemaster) is similar to Airplane 5.

Anyway, for what it is worth. Comparing to VSPAERO values for a similar aircraft design would be interesting.
Last edited: Jun 10, 2019
R

To introduce myself, I’m a (seriously old) TailHook Naval Aviator, and Aero engineer:

The suggested tandem engine configuration discussed is a very good idea. Asymmetric thrust is ALWAYS a nasty thing in any airplane, and you really ought to try it in a swept wing airplane with LOTTSSAA thrust!!!

I had suggested a tandem engine configuration years ago in an article in the EAA Experimenter, as a sensible way to pursue the development of ‘alternate’ engines. Failure of ONE developmental engine in a hot airplane (with two) is less likely to be a serious ‘event’ than an occurrence with only ONE aboard. (virtually NO response or interest). ::: ‘MY developmental engine will never fail!!!’

I offer this consideration for the configuration of an airplane: A tandem engine airplane -w- an extension shaft and a tilt-wing, to make the landing gear reasonable. A tilt-wing is a ‘piece-of-cake’, but the shaft is quite willing to ‘shaft-you’.

The tilt-wing has been done before. The F8 Crusader was such, worked great. First ‘burner I’d flown, and my immediate thought was that I’m finally in an airplane which is NOT seriously underpowered. BTW, ‘FAST’ is not difficult, (but you do hit harder). And: 1000 MPH is fine sport.

The extension shaft is no casual thing. A comprehensive dynamic analysis is in order, along with appropriately measured results. The development of such is likely to be made much easier by using a clutch to de-couple the shaft during start.

For you Reno Go-Fast Sports Racer guys: Rules: … ‘Aircraft are to be powered by an internal combustion engine or engines totaling no more than 1000 cu in.’

I’ve not seen any talk of a tandem pair of 495 cu/in seriously hot engines installed in an appropriate (tilt-wing/extension shaft) airplane. The wetted surface of such would be very little greater than a single engine critter.

I suggest that a well-done airplane like that would absolutely rule the Sport Racers, and scare the crap out of the unlimited guys.

rhbelter said:
I suggest that a well-done airplane like that would absolutely rule the Sport Racers, and scare the crap out of the unlimited guys.
Click to expand...

Unlimited is protected by their rules. The winning Sport category airplanes in recent years would finish eighth or ninth in the Unlimited Gold.

drstress,
Regarding Post 61: It looks like you've done the calculations by hand and included some values provided through the VSP Drag Buldup Workbook. Is that right?
100KT climb speed: Was this chosen as an estimated/anticipated cruise-climb airspeed for Airplane 05? It does seem faster than we'd expect for either Vx or Vy for a plane of this type.
I'd imagine that the most challenging performance case, and the one that might be expected to bound other other choices fro Airplane 05, will be single engine climb at MTOW and high density altitude. If so, modeling that situation at an early point may force useful adjustments to span, power, MTOW, etc. That is, assuming safe SE climb is a rigid requirement, it may be necessary to adjust the design to achieve that in some cases and accept compromises in other areas where it can be accommodated.
F

drstress said:
...We aren't going to solve the equation for the airplane neutral point. I even doubt there exists a closed-form solution....
Click to expand...

This is an IT Peter SOLIDWORKS palantir error. They get people killed and lose spacecraft. You should never just push the CFD/FEA button and trust the answer. You always should have at least a partial closed form/hand calc. There are other methods besides Raymer's for guesstimating the stability.
V

drstress said:
Yeah, that's why everything needs thoroughly tested before trusting anything.

"Guesstimating" is a good word for it. We are waiting for that closed-form solution you say we should try.
Click to expand...

A 14 second search on google for "calculate airplane neutral point" turns up a stack of articles on doing exactly that - closed form neutral point location calculations - some of them from classes at small, unknown schools such as MIT or the University of Delft.

No need to wait. If you've got some airfoil and geometry data, you can determine the theoretical neutral point.

You're right - it is. But the statement I was responding to was the one where you said this:


"...We aren't going to solve the equation for the airplane neutral point. I even doubt there exists a closed-form solution...."​
and then, in response to flyboy2160, you said:


"We are waiting for that closed-form solution you say we should try."​
So I pointed you to a closed form solution. Just talking about neutral points, as you were.

drstress said:
I'll even do you one better. If you read through the course notes for AOE 3134 there is a solution to calculate the neutral point for an F-104. The solution runs through nine pages and even then Lutze (the professor) only claims it to be "an estimate".
Click to expand...

I've done a fair bit of worrying about the neutral point and static margin. There is a lot of information in the equations. I've looked at dozens of sources for a good explanation. John Roncz's spreadsheets seems to provide a good calculation if you can find them. VSPaero seems to provide a reasonable estimate if you include the fuselage (included in Roncz's spreadsheet) which can have a significant impact.

Airplane Performance Stability and Control by Perkins and Hage seems to be where a lot of it originates. An oldy, but a goody.

As far as a closed form goes, it seems it would be a complicated equation. Usually, you probably solve for a couple cg locations or iterated to a location for neutral stability. Eventually you take your best "estimate" and move on. I've asked a lot of aero engineers about it and rarely got a good explanation. This probably explains why they spend years doing envelop expansion testing.
D

We can now perform an analysis that will estimate the required horsepower for several different flight conditions.

The “Drag Buildup Workbook” gives us a method to estimate parasite drag for different flight conditions depending on speed, altitude, propeller scrubbing, etc.

There is an important omission in the calculations for the "Constraint Analysis". Put there on purpose to see what would happen. All of the calculations are simple "hand, closed-form" calculations any high school algebra student should easily follow. Since no one commented on any of them, I think either no one bothered to look through them or no one has the expertise to understand them.

Either way this is my last post. I'm sure the "good ole' boy" club will pointlessly blabber on and on about any and all of my attempts to bring a small amount of order to what has to be the most random assortment of opinions I have ever experienced.

Since I don't fit in to this culture, I will welcome it as a badge of honor to be exorcised from HBA.
Last edited: Jun 19, 2019