The 109 had a couple of things that made it a real handful on the ground.

1. Cg was well behind the wheels. Supposedly to allow heavy braking.
2. A huge amount of negative camber. The story is that Willy Messerschmitt did not want to bulge the wings to accommodate more upright wheels.

Track for the 109E is 1.97m. Later models gained about 10cm. The Spitfire is 1.68m, the Hurricane 2.31m. I think that the relation of track to cg height is more important than track to wingspan. Prop diameter is the main determinant of cg height, of which all three aircraft were fairly close, the Brits at around 11ft, the 109s just under 10. The 109 probably isn't very far from the Hurricane for the cg height to track ratio. Both British planes had fairly upright wheels. I don't know about their cg position. The Spitfire was far more of a handful on the ground than the pussycat Hurricane.

While the gear placement in front if the cg could be altered without being visually glaring, altering the camber is going to stick out.

Of all the Daimler-engined fighters, only the 109 used the narrow angled undercarriage. Some of the Reggianes had narrow vertical gear like the Spitfire but handled just fine on the ground. All of the rest, which were all fast,highly manouverable and easy to handle on the ground had inward retracting gear. the 109 had mechanically operated manual flaps, unlike all of it's rivals. Willy allegedly said that the 109 gear was designed so that the wings could be taken off for ease of recovery or shipping, which i think is a load of cobblers, quite frankly,as all the other air arms found transporting fighters relatively simple, either shipping them in crates or on the back of recovery trailers (flatbeds).

I think the undercarriage was anchored and pivoted from the fuselage to relieve the light, single-sparred wing from the additional weight necessary for a wing-mounted landing gear and to facilitate the fuselage being moved around when in production, unencumbered by wings. The characteristic front profile of the 109 endowed by the inverted V motor naturally provided for this.

I should have mentioned vertical CG in my previous post which is where I was heading in my biplane reference but I ran out of time. The additional 'top hamper' introduced with an upper wing of a biplane can contribute to instability on the ground with a narrow gear.
T

The BoB ME or Bf109s were Hispano Aviación HA-1112 M1L 'Buchon' the Spanish licence built 109 with Merlin engines.

In the battle of Karelian Isthmus the 109s were G-6s.

This specimen lasted 5 days the battle with one credited kill ( last flight of the master sergeant Nils "Nipa" Katajainen who was wounded few days after the photo was taken )....galland-hood and high wooden rudder. 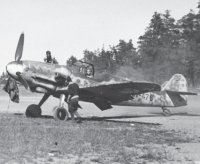 My other business is making paintball guns. My Hawk might end up better armed

How about an oversized Nerf projectile under each wing,like the 210mm mortars they used to fire as formation-destroyers?

And I am just now doing a deal for ammo components out of Turkey and the Czech Republic. Wonder what else they can stuff into the container? I did look around last time I was in Turkey, but most of the interesting items are long gone. Was hoping to encounter some old stuff that I could stuff into the next container I have coming over. Now to just find an old P-51 I could haul off for scrap value.

We must not allow a paintball gap! 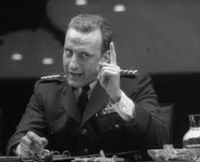 Since the Hispano Buchons from the BoB film were mentioned above here are some pictures my dad took of the Buchons when they passed through Jersey during filming.
Dad reckoned the Buchon was very lacking in climb performance, they seemed to be relying on the curve of the earth to gain altitude after takeoff, the battered old Mk 5 spitfire passing through with them took off, retracted the gear and at the end of the runway pulled up in a half loop, rolled off the top and disappeared in the opposite direction.
The two seat Buchon in the first picture has now been rebuilt after many years in Connie Edwards store in texas and is flying joy rides in the UK.