Steve, No its not, although Paul has my first engine in his web site which he photographed when here a few years back. This engine has also had the rads changed back to exhaust to the outside as did not work as shown, Neil.
R

Neil Unger said:
Steve, No its not, although Paul has my first engine in his web site which he photographed when here a few years back. This engine has also had the rads changed back to exhaust to the outside as did not work as shown, Neil.
Click to expand...

I suspect he's referring to the youtube video I linked earlier. It was posted to youtube by Lamar, but I *think* that the actual machine work was done by a guy on Lamar's airport who has a mill. I've got an email from him somewhere, but can't find it right now.

Again, working from my flaky memory, I believe that the welded tube technique was pioneered by one of the fliers on the Flyrotary list. Unfortunately, he's no longer with us (cancer).

Rv7charlie, yes, I was referring to the video, sorry Neil for the confusion.
Steve 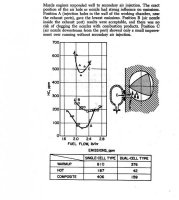 Thanks a lot, I searched not enough about this. Could you provide figures for power, torque, SFC, emissions for this Peripheral only Intake Port, Side Exhaust Ports? I guess the old approach of air injection in exhaust port area may improve the issue of a too hot exhaust, but from days of early engines, it is known that a lower compression ratio, a lower mean effective pressure is linked, paradoxically, to a higher exhaust gas temperature, another approach for this is improving MEP. I failed in locating the Paul Lamar video. Salut +

GESchwarz said:
Why am I not seeing any posts from people using the Mazda Rotary Engine?
Click to expand... 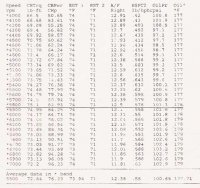 You have got to be kidding! You can easily get 150HP with a correctly matched prop. I'm shooting for 180-190 HP in my RV-4 with non-turboed Renesis (RX-8). It does come with a cost in time in studying successful installations, design and implementation.

As for weight, in a month or two my installation should be complete enough that I can remove engine mount and engine and weigh it. I'm fairly sure that it will come in at about the weight of a Lync 320. A factory-new Renesis with 100 amp alternator and oil (no exhaust) weighs 259 lbs. It is very easy to over-engineer stuff like engine mount, intake, exhaust, radiator and oil cooler mounts, etc. The RV-3B I'm currently flying (built by someone else) is too heavy.

As for fuel burn, any slightly higher fuel burn cost is very easily offset by the fact that the Mazda is perfectly happy on 87 octane Mogas.

As for RWS PSRUs, I saw one for sale in the last week. I think that many more were produced than flying. Probably because, as already stated, it does take time to design and implement your own engine installation. In realistic terms it probably takes the same mindset as wanting to design your own airplane, even though we now have an extensive knowledgebase of examples and do's and don'ts when it comes to Mazda installations, making it a lot easier.

As for engine forward packages, I doubt that any economically commercially available will exist. It's way too costly to develop and support such a package. Not to mention setting up a support (maintenance) network for it. No way to compete with the existing maintenance network. If the Wankel had been available at the dawn of piston-powered aircraft we would probably all be flying behind them.

Neil Unger said:
Mazda, 1 heavy -- incorrect
2 Hard to find -- incorrect
3 Only one good PSRU made--- incorrect, I have 3 available now
4 Not many people know how to work on them --- XXXXXX They are so simple any fool can fix them
5 expensive --- incorrect --check the price of alternatives $15,000 compared to $50,000, Alloy end plates Currently $2000 USD ex Oz
6 Parts hard to find--- incorrect-- try Mazda, apparently they have just had a production run on all rotary parts and reasonably cheap
7 Paul Lamar is quite ill and therefore not operating his site regularly., Like him or loath him his contribution to the rotary is legendary
Click to expand...

1. It's too Heavy for USA Part 103 Ultralights and many Homebuilt Kit Planes.

2. Just because you might have a Mazda Dealer Base close to you, doesn't mean the rest of the World does. How many Real Cross Country Flights have you made out of your Base Area?

3. Tracy Crooks, Reduction many years ago was like $3,500 and I think a place in New Zeland, NSI, I think was the name made some, but the New Zeland Company went out of Business last I heard years ago. So even after 25+ Years their still not readily available or adopted by any of the 350+ Airframe Manufacture's that I have heard of.

4. Yes, they're easy to work on, but most People don't rebuild there own 2 Stroke, or other Types of Engines Certifed or Non-Certified Engine either. You don't have Mazda Dealers on every corner, so not many People that will work on them. That's Why all the Wankel's/Mazdas have Failed in Planes, Boats, Snowmobiles, Cars, Golf Carts, etc., just about everything they have been used on. Not because they are bad Engines it's people who don't know how to maintain them. There like 2 Strokes, most People don't understand them either so they get a bad rap. Don't get me wrong, I like Mazda's, I had two RX7's, and a few 13B Engines I was going to use on a Plane. One Turbo and one Non-Turbo.

6. Apparently you don't get out of your Base Area very far.

7. Yes, Paul did a lot to promote the Mazdas.

Paul Lamar (PL) did a lot of research and promotion of the Mazda engine for Aviation and should be respected for that - he however didn't always get everything right. The people who did a lot (massive amount) of development work, trying everything, managed to get things close to perfect. These were Powersport partners, one of whom is still alive, and Mistral. The secret to success with the Mazda engine is the right modifications that make it a success. Even Mistral didn't go for the Peripheral Ports(PP), they opted for a 3 rotor - a mistake in my opinion, I do however love their PSRU. P-ports can be problematic if not done right, they do however allow the engine to breath much better. P-ports must be sized to the RPM used and not copy the Le-mans 2" ports (as PL promoted), as that's too big for our use and reduces inlet speed and therefor Volumetric Efficiency. VE is what the engine is good for, probably 110%, probably 230 hp for a PP - that's at out limited RPM (6-7 thousand RPM).

Yes it may be too heavy for lighter aircraft, but there are Aluminium housings and I'm looking forward to the next generation of lightened steel housings - we live in hope.

If you want an light engine out of the Box, it's not here yet, but the potential is there!
George
N

armilite, Nothing is free, but if you want cheap rotary and light, go a single rotor, fixed ignition, belt reduction drive, carburetion, and P port. 100 HP or 150 HP with a turbo but that complicates a simple system, increases weight and cost. All these have already been done, but depends on your capabilities and desires. Cost, Rebuilt engine in AUD P port and single rotor $5000, Belt reduction drive $1500, Rads $800, then carby and ignition possibly $500. (Rotec in OZ) Alloy end plates are an expensive luxury unless you fly weekly and weight is critical.
N

Neil Unger said:
armilite, Nothing is free, but if you want cheap rotary and light, go a single rotor, fixed ignition, belt reduction drive, carburetion, and P port. 100 HP or 150 HP with a turbo but that complicates a simple system, increases weight and cost. All these have already been done, but depends on your capabilities and desires. Cost, Rebuilt engine in AUD P port and single rotor $5000, Belt reduction drive $1500, Rads $800, then carby and ignition possibly $500. (Rotec in OZ) Alloy end plates are an expensive luxury unless you fly weekly and weight is critical.
Click to expand...

I believe Mistral went to the 3 rotor for a good reason, their G300 is conservatively rated at 300HP. That package can easily push them into the PT6 market. The PSRU looks very similar in size to the AirBus AS350 planetary that I have been prototyping with. The most common PT6 power rating is 650HP. PW has been producing many "blocking" patents in the last decade

Neil Unger, Your right on the single Rotor, I've been down that road and it's a lot of work, just getting the crank made up is a nightmare, then getting the balancing right, I figured about 115 to 120 hp, depending on the RPM. This would be a great little engine with lightened housings. If someone where producing them (at a reasonable price ) people would be snatching them up, but it represents a lot of work otherwise.

Lando, you are likely aware of the parts available from Atkins Rotary, these guys used those,As for my rotary fix, I am playing with different concepts, and no pictures of yet.
L

AIRCAB, a lot of work and testing gone into making that single rotor, believe me I know. Also their US based (Washington State), exchange rate not good for Aussies. However from what I can see it's very good work. Getting rid of those Cast Iron housings and running with lighter housings, you could put it in anything - even the Stratos .

I spoke to Mistral about not having PP they said they were aiming for longevity , can't understand that at all as the RPM was low. At 100 hp per Rotor the motor is definitely not stressed in any way, but they could have a achieved the same HP with a PP - 2 rotor, at maybe a slightly higher RPM or Turboed.

I believe they aimed too high too early with Certification, selling to the Light Aircraft population might have kept them afloat longer.

That was a good video.
George

Neil Unger said:
armilite, Nothing is free, but if you want cheap rotary and light, go a single rotor, fixed ignition, belt reduction drive, carburetion, and P port. 100 HP or 150 HP with a turbo but that complicates a simple system, increases weight and cost. All these have already been done, but depends on your capabilities and desires. Cost, Rebuilt engine in AUD P port and single rotor $5000, Belt reduction drive $1500, Rads $800, then carby and ignition possibly $500. (Rotec in OZ) Alloy end plates are an expensive luxury unless you fly weekly and weight is critical.
Click to expand...

StaggerMania, your last link no worky!

That’s weird. It’s works when I click on it.
Just google single rotor rotary engine.
Should pull it up.

The link works for me.