For all you "Cheap Charlies" in the midwest this appeared on the Dragonfly group on groups.io
I started building this Viking Dragonfly in 1995. Progress stopped about 2005. It sat in my garage since then. Recently, I assembled the fuselage, wings and controls in the back yard. I can now sit in the cockpit, make airplane noises and move the stick and rudder pedals to see the control surfaces move. But I’m done now.

If I lived next to a rural airport with a 6000’ runway, and had an air conditioned and heated hangar, I might consider continuing to fiddle with it. $20,000 and lots of hours might get into the air someday. I live half way between KSTL and KSET. KSTL is too big and KSET is on the wrong side of the Missouri river.

It will not return to the garage.

If you want it, come and get it. Bring your big truck or trailer and plenty of help. I will unbolt the wings, which can be carried by two people. The fuselage can be pushed around on its gear like a wheelbarrow.

If you don't want it, soon I will start disassembling it with a recip saw and move it in little pieces to it’s new home in a dumpster. 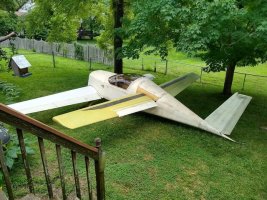 Keep this bird from the dumspter
B