My father built, flew, and sold his Spencer Air Car model S12DG ( according to FAA registry ) between the years of 1973 - 1986. The manufacturer’s name on the certificate would be Gregory, or perhaps Dale Gregory. He is still alive and at age 94 very sharp, but has retained no records of the aircraft. He only flew it about 20 hours and sold it to a gentleman from Washington D.C. Although he registered the aircraft and received an N number, which he put on the aircraft, he doesn’t remember exactly what the number was, and it was during the period of small N numbers on aircraft so it can not be determined from the small photo of the aircraft that he has. When he sold it he filled out all the required paperwork. Dad was educated as an aeronautical engineer ( but never used the degree ) and built the plane with sponsons. He never did water testing with it. The FAA has no record of the aircraft other than the information I have given here ( manufacturer Gregory, model Spencer Air Car S12DG ). I spent half an hour on the phone with the registry office and was told there were no actively registered aircraft of this type, and that they only showed 4 aircraft ever having been built. I have subsequently discovered that this is not true: there is at least one aircraft currently flying, and 8 listed aircraft in an FAA registry location, and according to Wikipedia “over 50 built”. I suspect that there is, in fact, information available on my Dad’s aircraft, but the office said they couldn’t run it down without an N number or serial number. Anyone got a lead I could use to track down a “Gregory / Spencer Air Car” ?

I can see the listing on the FAA's inquiry web page, with manufacturer name = Gregory; model name = Spencer Air Car S12DG; manufacturer/model code = 9570411. Since there isn't a link to a detailed record with the N-number, it hasn't been registered in some time.

Just for grins, I searched for your dad's name in the EAA's "Sport Aviation" magazine archives, and found him on a list of aircraft under construction. (See attached PDF.) I didn't find anything further.

That EAA registry gives his address in Minnesota. Is that where he completed the aircraft? At the time your dad was building the Air Car, I believe FAA personnel were still inspecting amateur-built aircraft. Your dad may have worked with someone from a regional FAA office near him, and there is a possibility that records could be held there. If you can find out which FAA office he worked with, that may give another lead.

Who knows, there are some old-timers here with really impressive memories, maybe someone will even know something about it!

Yes, you found the same info I found , and the clerk I talked to at the registry, on the FAA’s site. She looked and looked and couldn’t find anything more. She found other aircraft he built, complete with N numbers, but not this one. After talking with her I called Dad, a retired Air Traffic Controller and Flight Station Specialist in Minnesota, and confirmed with him that he had the airplane inspected and an N number issued which he painted on the aircraft. After the requisite test flight hours he flew the Air Car from Minnesota to Cleburne, TX. When I suggested to the clerk at the registry that somehow the ball got dropped in the registry process she said that was not likely and that they have all records back into the 40’s and dig stuff up all the time. It seems odd to me that an FAA inspector issuing an airworthiness certificate to another FAA employee would drop the ball in completing the filing somehow. This was 35ish years ago, so clearly no one in his regional office will still be there, and I doubt that they will have any records, but your suggestion is worth pursuing... I will check. Thanks.

A friend of mine bought one recently and I believe has had it shipped to him in Australia. I’ll ask him if he knows the provenance of it.

Have you looked up the N-number? Even if it was reassigned to another aircraft, the record often shows the previous assignment.

Dana said:
Have you looked up the N-number? Even if it was reassigned to another aircraft, the record often shows the previous assignment.
Click to expand...

The OP said he does not have the N number.

Aircraft type clubs and antique aircraft restorers have been able to find a surprising amount of supporting data at the regional FAA offices. Sometimes it's a dead end, but they do get lucky. It may be worth a shot. If they could at least get you the N number, then you could go back to the registry office and try again. Good luck!

I pulled down the FAA's registration database from their web site, and searched the file of deregistered aircraft, looking for the manufacturer/model code. Bingo! The last registered owner was the gentleman in Washington, D.C.

Hope this helps get you a step closer!
S

Fantastic ! Deregistered files is one of the places the FAA clerk searched without success; I’m guessing it wasn’t immediately retrievable through any search entries and you had to spend some time scanning the files. Silly me, I didn’t go there because I assumed the “help” from the professionals at the FAA registry would have exceeded my puny efforts.

Interesting that the party to whom Dad sold the airplane still had it until 2013. I can now contact him to determine what type of life the aircraft led and then fill my 94 year old Dad in on it. The aircraft, as you may know, is a HUGE project, which Dad accomplished pretty much by himself: I remember him spending long hours cutting out all the small pieces for the wing ribs in the basement. He built several aircraft, but this was his crowning achievement, of which he has only a faded old photograph in his nursing home room.

Please know that my father is a fellow Texan of his 34 years in retirement ( he departed Minnesota and headed straight south ) who will greatly appreciate your effort to solve the mystery of the plane’s fate. I was a Texas resident ( Arlington ) for 21 years and recognize your Texas hospitality in helping out.

To everyone else who responded with suggestions, Thanks to you as well for taking interest in my search. I have been an active pilot and EAA member since 1979, and although I never built an aircraft, I love the RV6 I purchased 20 years ago ( I put 3,000 hrs on the airframe so far ), have been to many EAA conventions, worked on my plane, and enjoyed the camaraderie of the home built community . What a great, positive community of people y’all are ! Stay safe; stay healthy all !

I just found out that my buddies Aircar is serial number 315 and it was built fairly recently (2009 ish), so it won’t be the one you are looking for. 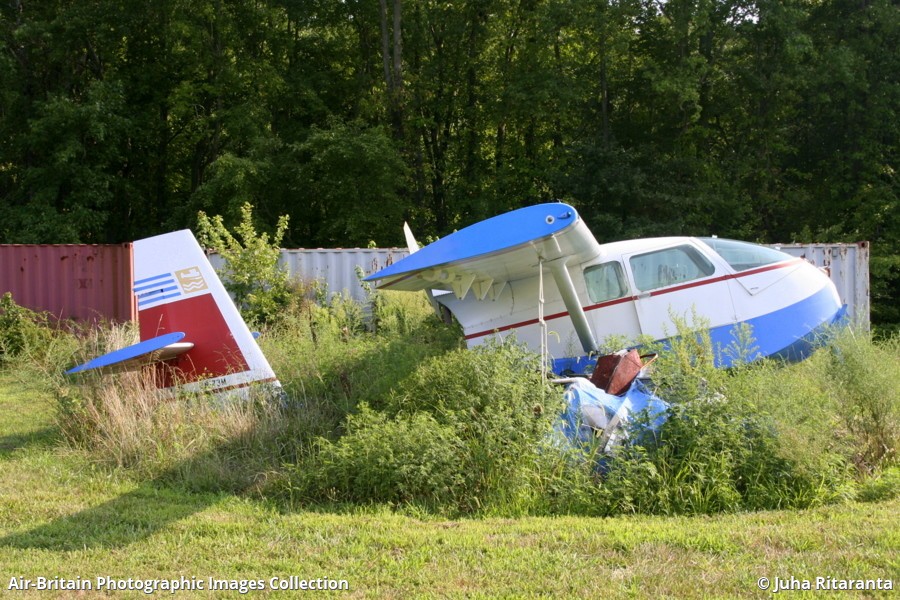 Looking at google maps, it looks like its still sitting there at the airport, although with the tail off.

Yes, that is the aircraft. So sad to see it deteriorating. Sadder yet because the man who bought it from Dad is an extremely successful lawyer from Washington D.C. who did not finish paying Dad for the airplane. Thanks for the photo, on another site there was a photo with the tail now broken off. Sigh....
A

ScottGregory1950 said:
Yes, that is the aircraft. So sad to see it deteriorating. Sadder yet because the man who bought it from Dad is an extremely successful lawyer from Washington D.C. who did not finish paying Dad for the airplane. Thanks for the photo, on another site there was a photo with the tail now broken off. Sigh....
Click to expand...

I believe that's how you become an extremely successful lawyer.

From the law firm of Dewey, Cheatem, and Howe?

Seriously, though, it is disheartening to see the aircraft your dad built sitting in a state of disrepair. Building an Air Car was no easy feat! I hope someone takes an interest in it and restores it.