On another thread about glue for wood aircraft construction, several posted comments about epoxy softening at high temperatures, and the need for composite aircraft to be painted white. The implication being that epoxy is inferior to another glue.

Clearly wood and fabric aircraft are different in some respects to composite foam/fiberglass/epoxy structures.

Hughes FPL-16A and T-88 has been around for decades, and have been used on wood aircraft that have been painted all kinds of colors. Has anyone ever heard of an epoxy failure on a wood aircraft due to heat? I haven’t.

It seems to be that concerns about epoxy are nonsense, and there are plenty of flying aircraft (including fast, and aerobatic aircraft) to prove it.

I have not heard of any epoxy failures due to heat, either. That said, there is some limited data available to assess these concerns.

First, System Three publishes some data for its T-88 adhesive regarding performance at elevated temperatures, available here:
T-88
They recommend a maximum service temperature of 160 deg. F.
For a lap-shear test, they show the following relationship between temperature and strength.

So at 180 degrees, the shear strength is down to half of its room temperature value.

The U.S. Forest Products Laboratory tested a couple of dummy wing panels in the summer sun, to see how hot they would get. (See report no. 1343-B, "A Study of Temperatures Attained in a Dummy Aircraft Wing During the Summer at Madison, Wisconsin." Of interest for this discussion, they had thermocouples embedded in the bond lines between the plywood skin and the underlying structure. Their worst case was on an all olive-drab wing on a sunny, calm, July day where the upper bond line hit 172°F. A second test panel was evaluated in August with different types of paint, measuring the effects of infrared reflectivity. The worst case in that test was a panel painted in a blue-gray, which hit 159°F in the upper bond line. (At the same time, the panel painted orange-yellow was at 136°F.) In all tests, the temperatures in the upper bond line closely tracked the temperatures recorded on the exterior surface.

This chart was taken from a test of paint color vs. temperature for "Soaring" magazine: 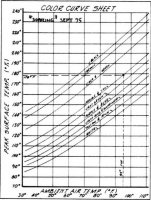 I can't find the article itself at the moment, but I believe these temps were recorded on flat test panels near ground level.

Now keep in mind that the test results from FPL and Soaring are for static conditions on the ground. We all know that the outside temperature drops as we go up in altitude. The FPL tests also show that surface temperatures drop rapidly with wind. So, our aircraft surfaces will be cooler in actual flight conditions.

Given the above, there is a hypothetical danger of a glue line failure on a hot day, but there are several "IFs" that would come into play: elevated temperature due to dark color; high loading before the surfaces cool off in flight; and bond lines that have a low safety margin in the first place. I suspect that those IFs are why we don't hear of problems.
T

T-88 is popular because it’s easy to mix and has a relative high temperature. Resorcinol is 400 F softening so that is what epoxy is against. I have popped apart epoxy joints with a heat gun on purpose, so heat will release it. How much the heat penetrates to the joint through covering,maybe a layer of ply and 1/4 to 3/8 of an inch of let’s say Spruce to get to the first glue joint is probably pretty insulated. There are plenty of black Pitts out there and a good chunk are made with epoxy.
V

TFF said:
How much the heat penetrates to the joint through covering,maybe a layer of ply and 1/4 to 3/8 of an inch of let’s say Spruce to get to the first glue joint is probably pretty insulated.
Click to expand...

The insulating properties of the materials won't change the temp that the glue joint ultimately reaches, right? If the inside of, say, a wing bay is 140F, then everything inside that wing will get to 140F in a matter of minutes.
Materials with low heat conductivy might even work against us. If a glue joint inside a wing is 140F after sitting on the hot ramp, but then we take off and airflow inside the wing cools the air in the wing, the glue joint might still be hot several minutes into the flight, when it seeing flight loads, if the wood has poor heat conductivity.
Last edited: Oct 25, 2020
T

I was told by a wood kit company owner, it’s not 140 inside the wing. The surface might be 140 but by the time the temperature gets to the first glue joint it’s only 100. Wood is good at insulating. If it was steel, I would be worried. Big heat sink then.

It has been discussed on this forum before. Unfortunately, the article they mention is no longer accessible. But here is the link of the discussion on this forum -- Painting Composite Aircraft

Wood and fabric is not interchangeable with composite construction.

TFF said:
I was told by a wood kit company owner, it’s not 140 inside the wing. The surface might be 140 but by the time the temperature gets to the first glue joint it’s only 100.
Click to expand...

Interesting academic discussion.
My planes are built with T88. No worries...
V

That sounds logical to me. The sun heats the top wing surface, which (very efficiently) heats the air inside the wing. Everything inside the wing, including the glue, gets hot. Heat is lost through the lower wing skin (primarily through convection, a little radiation). But the inside of the wing is gonna be hot while the sun is shining.

joolkano said:
It has been discussed on this forum before.
Click to expand...

Epoxy is not inferior; it is different. There is a reason why non-heat cured composite aircraft are painted white. I would do the same for a stress-skinned plywood structure (or use resorcinol instead). Like @Rockiedog2, I would have no concerns about epoxy on a typical wood and fabric airframe. I'm not aware of a single failure in that situation.

That’s just it. Yours and nearly every other wood airplane built for the last 30 years are all epoxied, with zero heat related problems, yet these FPL tests, and TG temps and other stuff keeps coming up. Time to put his crap to bed. Obviously despite the tests, epoxy works, and works good, and it has worked good for decades. Some might argue it works better as it is less dependent on perfect joints then the alternatives. These page is chalk full of the best sort of nerds. Somebody has to have a good idea about why all the Fishers, Pientenpols and Emeraudes are flying great with no heat/epoxy related problems. Unless I am not seeing something, the only reasonable options are 1.) even at reduced strength due to heat, the epoxy is still sufficient, 2.) the glue line temps do not get as high as people suspect they do, 3.) the old FPL tests did not accurately recreate normal construction and or operating conditions.
V

For those wondering, here's a link to the Forest Products Lab study on internal wing temps:

Summary of a study of temperatures attained in a dummy aircraft wing during the summer at Madison, Wisconsin

5 pages long, done in 1943. Interestingly it was originally a classified document.

Plywood-sheeted wings painted olive drab reached internal temps up to 170 F in the summer sun when OATs were 85-90F. Even glue lines at the bottom of the wing (skin-to-ribs) reached 135F.

I have an olive drab Champ. Think I will push it out into the sun later this week when its out, and put a thermometer up in the wing and see how hot it gets on the ramp.

fly2kads said:
So at 180 degrees, the shear strength is down to half of its room temperature value.
Click to expand...

...and still exceeds the shear strength of Sitka spruce.

The studies done are not wrong however it also never stated what the end result would be. Human nature being what it is, we gravitate to the worse thing that we can imagine, the plane breaking up in flight. I don't believe anyone is actually saying that is what's going to happen. A plane constructed properly either with Epoxy or Resorcinol should be fine. You can even paint composite airplanes a dark color if you choose, however understand that when it comes time to sell that airplane your pool of potential buyers and $$$ could shrink significantly; plus, you are always wondering about your liability exposure. This was the main concern of the OP in another thread because he plans to sell his Jodel and was curious about its construction. Why because of liability exposure.

The argument will always go on and will never be put to bed because there will always be new people seeking out this information.

My all wood Falconar F-12 lasted over 25 years until someone ground looped a very easy handling taildragger. White with brown and orange trim.

I built a KR-2 back in the mid 1970s using Weldwood and made wood samples when glueing. They all tested great.

Anyone worried about the monetary "value" of their own wood airplane has their priorities wrong. Don't build to sell. Build to fly. Its well known that wood aircraft typically has a lower value then comparable metal aircraft due IMO to an irrational bias that exists out in some parts of general aviation. This is kind of good as it provides a relatively cheap supply of airplanes for rational pilots who can't or don't want to build. It is not however good for home building to keep feeding into this mythology. I think the truth is that those old tests do not in any way reflect the overall actual strength of typical wood epoxied aircraft structures in normal operating conditions.

I've been experimenting with Sherwin Williams 'Vinylsafe' paint for my plastic aeroplane. It uses pigments that do not get as hot in the sun as regular ones. If you have a heat sensitive construction and don't want white, it's something to look at.

It's not a good idea to tell people where their priorities should lie as you wouldn't want others to tell you what your priorities should be. Priorities are neither right or wrong, it only matters if it serves them well. Cost will always be a big factor in airplane ownership. An airplane that is always hangered, maintained properly will always command more $$$ than a similar one that wasn't looked after (obviously) whether it is made of wood, composite or metal.