I'm very interested in making this engine work for my KR2s.

Scot is asking $5K each and has 34 of them.
They are almost bare engines (as pictured) and will need wiring and plumbing - so not a small project. But its been done before: FlyEco - Innovative drives for Ultralights

Anyone want to do this together? (divide and conquer)? 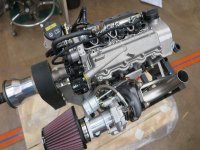 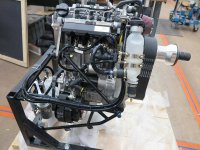 It certainly *looks* attractive, and the price *looks* good, except for the fact that there's no controller. Are they actually flying on military drones? For how many years?

Don't forget that liquid cooled engines need a lot more stuff around them than air cooled engines. Don't be surprised if it takes another 30-40 lbs of 'stuff' to make it fly. I like liquid cooling (rotary going in an RV7), but one has to be realistic about adding up all the weights required.
Y

I wish there was such an option. I have always wanted to adapt a two stroke Detroit Diesel to an airframe capable of carrying it.
The two stroke diesel's sound incredible with no shortage of power.

Also, I have wondered what the procedure would be for a runaway diesel engine would be while airborne?

Yellowhammer said:
Also, I have wondered what the procedure would be for a runaway diesel engine would be while airborne?

Yellowhammer said:
Also, I have wondered what the procedure would be for a runaway diesel engine would be while airborne?
Click to expand...

Throttle body to shut off air .Only used for emergency and for a smoother shutdown.
R

A fuel shutoff will kill it fast. Once fuel
Can’t move forward it will stop flowing in the injection pump. Pretty much how diesels are shut down.
R

TFF said:
A fuel shutoff will kill it fast. Once fuel
Can’t move forward it will stop flowing in the injection pump. Pretty much how diesels are shut down.
Click to expand...

Unless you have a lot of blowby from worn rings
P

REVAN said:
@osprey220 - A few years ago, Superior was showcasing a very nice looking 3 cylinder opposed piston diesel called the Gemini. If enough people want something like this, maybe it could still happen.
Click to expand...

As I recall this engine wasn't fully developed and the new owners of Superior ran into serious crankshaft problems with some of their spark ignition engines and bought a lot of them back. Probably slowed them down a lot.

Worth noting that virtually every new design of certified engine is a diesel. However, 4 cycle (SMA) and auto conversions (Thielert, Austro) are HEAVY. Only 2 cycles can be expected to give the power/weight ratio needed to be a successful CI replacement for SI. Only the 600HP RED gets down to these numbers with a 4 cycle.
Last edited: Jun 24, 2022
R

We seem to have some serious issues with understanding what's required for combustion engines to...combust.

Not really. In the right (wrong?) conditions, engines can continue to run uncommanded - diesel is not too far removed from oil, so if enough of that can get into the cylinders...
I've seen an SI engine (in a car) continue to run after the ignition was switched off. Not well. And it was a little bit on fire. And it had just been terribly abused. But it did continue to run until strangled of air.
T

I once drove a 65 Vette a 100 yards on a dieseling engine with the ignition off. Still unrelated. If your engine is so blown up that it can run on crankcase oil, don’t you think you are way above worrying about a runway engine. In fact I would rather let it runaway and fly it into the ground with power than be a glider. We would be on the path to total the plane anyway. I would rather be able to get it to an airport.

For runway diesels, a friend was rear ended while sitting at a light by a stoned kid in a van at 80mph. No skid marks. His old Mercedes wagon was sandwiched. It broke the linkages and it broke the hood release to pop it open , so no hitting the kill lever. He watched it runaway until fuel was gone. The impact ruptured the tank and put the contents on the ground in one second. If your engine grenaded enough to not have control, why would you think an air shut off would still work? If the engine was so worn that you are flying it where it runs on engine oil, don’t you think you are about ten years past your overhaul? I don’t think these are normal issues if we are not flying crap.
Y

I thought the turbo had a lot to do with the engine running away?

There have been cases of run-away diesel engines with mechanical governors. If the right part in the governor fails, the fuel delivery will stay on max until there is no fuel left or not enough engine left to keep running. Much less of a risk with electronic governors or common rail.

Yellowhammer said:
I thought the turbo had a lot to do with the engine running away?
Click to expand...

This can happen. If the oil seals go out in the turbo and it sucks oil into the compressor side, it can run away on the oil. A solenoid shutoff for fuel does nothing in this situation. An air shutoff is the only way to stop it at that point. When I was in sled pulling they mandated us to have a spring loaded air shut off held open by a handle in the cab for this reason. We were also pushing the mechanical pumps to the point they would sometimes not return off the limit springs at the end of a run. We had one do this and the datalog showed 7400 rpm at the point the air shutoff was engaged.
You must log in or register to reply here.
Share:
Facebook Twitter Reddit Pinterest Tumblr WhatsApp Email Share Link