dog said:
I imagine that taking a certified project that was
stripped back,no rigging ,no systems or fire wall forward,wings opened up,control surfaces off,doors off,no glass,its going to look a lot like any old quick build kit plane before a pre cover inspection,and qualify as an experimental homebuilt,or I would like to think.
Click to expand...

As tspear said, almost certainly not. Could be done as an E-Exhibition.

tspear said:
Probably not. That is a lot of systems work. The 51% applies to tasks. A good example is wing ribs, they count as a task. But consume massive number of hours on a tapered wing....

Yes, the tasks on the list are heavily tilted towards structure. Avionics, wiring, FWF, and other systems are only a couple line items.

I really wish there was a way to permanently and irrevocably "convert" light piston airplanes (even if you limited it to single engine unpressurized over a certain age) to be on par with secondhand EAB. Sort of like a cross between the Canadian OM and the PNC proposal from 2013. But I'd imagine any such move would have to be accompanied by legislation absolving the original manufacturer from all liability on airplanes so converted or it would never pass.
C

Ah. I thought you were referring to the Grumman AA1 that had been twinned... My bad.

edwisch said:
A problem not yet mentioned is that many very small twins have the engines close to the centerline for better single engine controllability, but this gives interference drag between the nacelles and the fuselage.
Click to expand...

And internal noise caused by the prop's tip vortices striking the fuselage sides.

I still think this Russian twin is a neat example. 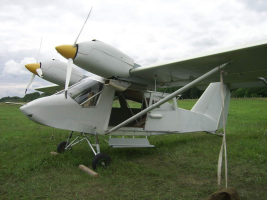 You are talking about 2 different families of airplanes.

John Thorp designed his T-18 homebuilt plus the Fletcher/Cresco/PAC 750XL series that is still built in New Zealand. John Thorp also designed the first Derringer before production was taken over by George Wing.

The Grumman-American series of light singles is based upon the BD-1 light 2-seater designed by Jim Bede. Under GAA management, they developed some 4-seater variants. I have a few hours flying a GAA Cheetah and rather enjoyed it.
This light twin is based upon a GAA single.
Why this example (N134GB) has the word "Derringer" on its engine nacelle is a mystery to me.
Last edited: Aug 10, 2022
D

tspear said:
Probably not. That is a lot of systems work. The 51% applies to tasks. A good example is wing ribs, they count as a task. But consume massive number of hours on a tapered wing....

SpruceForest said:
An updated Wing Derringer would be a lot of fun, but between retracts and the multi-engine/non-centerline config, it would be interesting to see what insurance premiums would run. There is also the mission... likely a good aircraft for those doing a lot of flying (staying current/staying highly proficient in engine-out management) over water or mountains (so no place to put the aircraft down) at night (night forced landings are not nearly as enjoyable as day forced landings). $400 hamburgers on a nice Saturday afternoon? Maybe overkill on the engine count.
Click to expand... 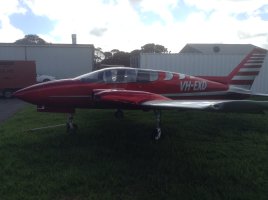 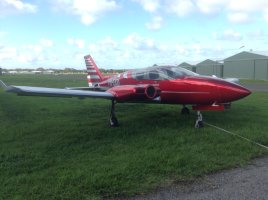 challenger_II said:
Ah. I thought you were referring to the Grumman AA1 that had been twinned... My bad.
Click to expand...

I was: note the name on its nose. George Wing's stunningly beautiful and technologically superior twin was called that.
P

deltadart48 said:
Having lived with my Air Cam for 12 years now, I would disagree that the handling is horrible.
Click to expand...

My neighbor liked hers, too. I also have friends and neighbors who think that Cubs have good handling characteristics.

billyvray said:
I still think this Russian twin is a neat example.

And we wonder how tiny Ukraine can hold off one of the largest armies in the world for months on end????
T

Wing Derringers biggest problem is they are slow. They should be a rocket but they aren’t. Cool for sure. Cockpit is small.

Aircams are a blast. They fly like any floaty plane of its type. Cost is pretty rough. Most cool kids would probably go for a Backcountry Cub in that price bracket. Aircam’s biggest problem is it’s not certified. It’s a plane that needs a job. 80% helicopter in an airplane. Photographs, aerial surveys, wildlife counting. I could put one to work right away.
Z

bmcj said:
And then the same designer proved with his next world-rounder design that you don’t need the extra engine after all.
Click to expand...

A neighbor bought a Derringer to commute from Florida to St. Vincent. Wanted two engines, but it was limited in range and baggage capacity. Replaced it with a Mooney.

pfarber said:
Anyone have a good reason why there are almost no multi engine E/ABs?

Iirc FARs don't forbid it and they are not overly complicated.
Click to expand...

To directly answer your question, you don't see a lot of twins for a whole slew of reasons. Most practical, is due to common design practices, you end up with lots of interference drag, and despite having some large multiple of the a single engine's horsepower, you typically don't see a whole lot more performance. One big engine generally works out better.

Your suggesting that they aren't overly complicated is .. well lets talk about that. Sure, you can build a powerplant, and supporting systems, and then do it twice. Good! That's the easy side. Once one engine goes out, a whole lot of things can go very wrong. This is compounded with the idea that most twins are setup as planes designed to be fast, so there's a lot of compromises to the flying qualities of the plane, so you get the higher performance.

When things go wrong in a twin, they go "a lot more wrong". Lets say you manage to get it into a spin. Your plane has engines way out at the ends of the airframe, giving you a large polar moment of inertia. If your spin develops at all, you're not fighting a pair barbell with 300lbs on each end, that's 20' long. While if you're flying a cherokee or something, nearly all your mass is near the center. High performance twins also tend to have small control surfaces so they behave well in their designed operating speeds.... Which makes their surfaces pretty marginal in an emergency.

It's possible to design a twin that has no VMC, but you quickly lose performance. There are some planes that are like that. They're not fast...

Twins also typically have constant speed props. This means it can be really tricky to determine if there's a problem.

There's a whole lot of other factors that make figuring out a POH for your experimental that makes it a very complex issue. It's also likely you don't have good enough test pilot to get that entirely sorted out. And if they DO find a problem, are you a good enough engineer to sort it out?

Single engines just don't have any of those issues.

Victor Bravo said:
Two 35HP industrial V-twin engines would open up some interesting possibilities for small single seat airplanes, where you might be able to make the airplane smaller and simpler than otherwise possible because of CG.
Click to expand...

I've been thinking about this sort of thing for a year or two now. Sadly those industrial v twin's don't have great power to weight. Why stop at two though? With two, when one dies, you have 1/2 your horsepower gone, and some significant drag. If you have four... an engine out would only be 25%.

I also pondered some sprag clutches and driving the same prop... Completely nonsense, but it was fun to consider.

The engine or engines are not the problem... obviously it is much much easier and more efficient to have one big engine instead of two small ones.

And then you realize there is a propeller that has to be put somewhere.... and sooner or later you start thinking "well... If the propellers were smaller and closer to the middle of the airplane, it would solve a whole lot of ssues..."
N

Victor Bravo said:
The engine or engines are not the problem... obviously it is much much easier and more efficient to have one big engine instead of two small ones.

And then you realize there is a propeller that has to be put somewhere.... and sooner or later you start thinking "well... If the propellers were smaller and closer to the middle of the airplane, it would solve a whole lot of ssues..."
Click to expand...

I'm sure that when they do manage to get "distributed electric" all worked out, it will be a game changer for many different applications, including the ones we're discussing in this thread. A Cri-Cri sized littlepocket rocket with ten or twelve little motors on the leading edge (or above the trailing edge on a laminar wing), would likely be pretty interesting, able to have a little smaller wing, have better short field performance, and have a little smaller/lighter fuselage as well.

"Distributed electric" on the leading edge of a small Debreyer Pelican layout would overcome the three biggest obstacles to making that kind of airplane work... the prop clearance at the trailing edge, the powerplant mass (no longer) at the trailing edge, and keeping the thrust line thru the CG. It would also allow a reduction int he size of the landing gear.

PMD said:
I would have tried it with engines and props and cut out the grotesque 4 place extension of the once beautiful fuselage
Click to expand...

I know that the original 2 seater was a very attractive aircraft. However, the fuselage extension done on this aircraft is also a very attractive modification. You need to see it in person, it looks like a bullet. 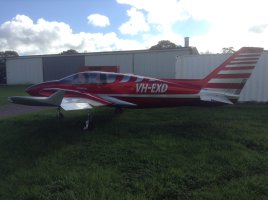