TFF said:
China wants the products but can’t free up the infrastructure to use it. They don’t want 300,000 people flying around where they want to go. Their mind would melt.

At worst someone flying across the US has to make an airport 300 miles to find safety if they have a problem. Usually less than 60 miles. China airport system is major city to major city. They are all 600-1000 miles from each other over mountains. How would you like to make every flight somewhere like crossing the Atlantic? They don’t have the infrastructure to handle small airplanes. City to city doesn’t have roads sometimes.

They would prefer to shuttle people. They want Greyhound for the air. What they want is turbine powered DC3s.

They bought up all these weak companies compared to what they were use to. They knew they were not going to buy Boeing what’s the difference with Mooney? Cities bought them for the revenue they thought they could generate. That’s the way the economic structure works there. They buy and expect the money to roll in. As expensive as aviation is, it’s also the lowest profit margin of any business out there. The bad part is the people who do these deals heads are literally on chopping blocks if they fail.
Click to expand...

Dear TFF,
To complicate your description of Chinese airfields ....
Chinese population distribution resembles the USA with densely-populated cites along their Eastern Seaboard, but thinly populated in the Middle of Asian. Those cities are already well-served by rail and have major airports, but very few smaller airports. OTOH, density drops dramatically as you leave the ESB. Southern China is mountainous and forested by thinly populated by Panda Bears. South Central China (formerly called Tibet) has the highest mountains in the world and insignificant population. Similarly, the Klakaman Desert to the west is too dry for nomads. That aridity explains why Turks, Mongols, Tatars, etc. frequently launched cattle raids against neighboring tribes. Some of those cattle raids took them West of Paris!
S

mm4440 said:
There are two sealing discs between the rods on the single crank pin and it fires every 120 degrees.
Click to expand...

Do you have any drawings or photos of the crankcase/chamber seals, etc? Those crankcase chambers are very narrow. I wonder how well they sealed, and how thick the discs were. The linear speed of the disk edges would seem a bit high. I am fascinated, and have been since learning of this engine years ago, of how it was built. There is a company in the US threatening/promising to make a top hat piston two stroke. This was developed by Norton Villiers in the 1970's, and has maintained a website with several drone oriented twins and V4s.

Thought I'd posted this before, but a search of HBA doesn't turn it up: 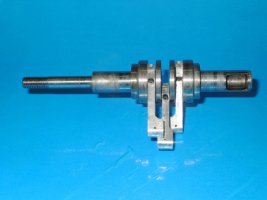 So do all three fire at the same time?
C

Tiger Tim said:
So do all three fire at the same time?
Click to expand...

No. There are three coils, one by cylindre
C