Unfortunately the search function is down so I was unable to locate information.

I'm installing a different non standard engine in my kitfox. Since I'm already past the point of no return (engine and most crucial items purchased motor mount built etc) I'm not going to get into a debate about it being a good idea or not. So I'm not going to say what kind of engine.

For the purpose of this thread I believe the only crucial bit of info is that it is fuel injected and uses a high pressure fuel pump. The only other hint I will give is that it's not a Subaru.

The aircraft has a 6 gallon tank in the right wing and used to have a tank mounted forward of the instrument panel that was removed for cg reasons (heavier engine). The plan right now is to mount a 6 gallon cylindrical spun aluminum tank mounted in the location shown in the screen cap. It will be a header tank meaning the fuel will drain from the wing into it with the fuel pump near the outlet on the bottom.

The green line is the path the fuel travels to get to the engine. The yellow line is the fuel return line for the fuel injection. I'm concerned mostly about the need to vent the header tank. In my reading made difficult by the non functioning search option I've come up with concerns why it should be vented and why it shouldn't.

I may have had another reason not to vent the header but if I did I can't remember it.

The other question is regarding the fuel return.

Due to the folding wings and there not at present a convenient port to run the return line to on the wing tank it would be nice to run the return line to the header tank and hopefully if there was still fuel in the wing the fuel pump would have enough pressure to force fuel back up the line to the wing tank. That does however negate the possibility of a filter between the tanks, and Ive read many comments about the existence of such filters.

In a pinch I'm considering running the return line to the lower sight tube port.

For those of you wondering if the header is in the cockpit, yes it is. This fox will only be a single seater. Brackets will be welded in to mount the tank.

So what are your thoughts? 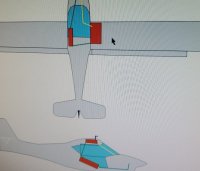 Vent the header to the top of the wing tank.

Return fuel to the top of the wing tank to avoid draining fuel back through the pump/injector system when not running.

My opinion is it needs to be vented. I would also change the routing. I would have the return to the header. The wing tank empties to the bottom of the header. I have to think if it would be into a T fitting or not. Top of header vents to top. I would also have a shutoff at the wing just in case. Also don’t wimp out on wing to header feed; -8 or better line. BJCs is right about the head pressure, but my attempt is to be able to run on either tank if one stopped flowing.

Any way, it would be pretty easy to mock up with some water jugs to make sure there is no suction clogging.

BJC said:
Vent the header to the top of the wing tank.

Return fuel to the top of the wing tank to avoid draining fuel back through the pump/injector system when not running.

Other than having a fuel shutoff on the bottom of the header tank before the fuel pump how would routing the fuel return to the wing tank prevent fuel draining back through the system and eventually back to the pump?

If you vent the tanks together, you should be able to connect the return line to the vent line.

Even if you don't vent the tanks together, the header vent needs to end higher than the fuel level in the wing tank, so either way you need to run the line up there.

Will Aldridge said:
Unfortunately the search function is down so I was unable to locate information.
Click to expand...

It was pointed out in another thread that successful searches can still be done from a generic GOOGLE search page. Try your search from there, and if you want your search to (mostly) limit itself to this forum, then add “Homebuiltairplanes” to the search criteria.

I am pretty much with the other guys. Bottom of wing tank to header for feed, top of header to top of wing for vent. Vent from high spot on wing tank. Feed to engine from header tank with good filtration to high pressure pump.

Now for options and discussions...

The advice to use AN8 to feed the header of a 100 hp MAY be over the top, and it may not. I would run the basic tube flow calcs then see what others have done successfully. Whatever you chose to do, run a mockup with all the plumbing, connections, filters, high pressure pump, and regulator, and make sure that the header will stay full while the high pressure fuel pump is trying to drain it.

Oh, I do have another comment. My wife's RANS S-6 has 18 gallons on board and finds that to be too small. She says you need to put in the other wing tank. And that will take you just to the amount departing on a cross country that she finds uncomfortable...

wsimpso1 said:
Oh, I do have another comment. My wife's RANS S-6 has 18 gallons on board and finds that to be too small. She says you need to put in the other wing tank. And that will take you just to the amount departing on a cross country that she finds uncomfortable...

I appreciate the suggestion but I'm not going to and here's the rationale:

My plane is a kitfox model 1 with a max gross takeoff weight of 850lbs and a Vne of 100 mph. I'm adding 30-40 lbs on the nose and 15 lbs in the tail. Ive stripped the plane down to the last nut and bolt and have removed as much weight as possible but the engine choice has added a fair amount. It was built fairly light to start with and by removing a lot of stuff from the cockpit and the plan is to use carbon fiber in the cowling and wingtips which should shave a few lbs. Even the new header tank will be lighter than the roto molded dash tank. I've made up for some of the added weight but I still don't have much to play with. Pre modification with the rotax 532 the plane weighed 468 empty. I'm hoping for 510-520 when all is said and done. I weigh 230, and 12 gallons of fuel is 72. That only leaves about 40 lbs for baggage. I want to do a little back country flying and camping. I also intend to fly it to Osh when I'm done.

Also the wing is already built and I don't want to cut out any of the cross bracing to add a new tank. Besides I'm not really sure there are any tanks I really like. It seems the refineries are trying to see how many different types of material their gas can dissolve and aluminum tanks generally haven't worked too well in kitfoxes(the twisting breaks welds). I have to repair the one Ive got now.

Ive talked to one guy who also has a model 1 with a rotax 670 and he said that with 92 hp he can exceed Vne in level flight fairly easily and I'm going to have at least 10 more hp than him. Ive also got a much more fuel efficient engine.

So I'm going to be cruising on maybe 3 gph, I hope. Ive got several lbs budgeted for drag reduction.

Cruise speed with the new engine will be the same as it was with the Rotax 532, the difference will be the fuel burn. Hopefully by reducing drag, the power needed for cruise will be reduced enough to stretch the range, not massively obviously but enough to be worthwhile. With 12 gallons and 3gph I've got 3 hrs of cruise with an hours reserve. That's the hope at least. We'll see if it turns out that way.

kitfox site:www.homebuiltairplanes.com finds hits in the site that contain 'kitfox'

kitfox inurl:www.homebuiltairplanes.com finds hits with 'kitfox' in the thread title.

Will Aldridge said:
I appreciate the suggestion but I'm not going to and here's the rationale:
Click to expand...

Sounds like you have thought it through. What is your airspeed projected to be at 3 gph?