Finished. Now I need to call the local FAA office. From what I hear, they are inspecting again.

Posting the fuel flow test. When I built the hanger I welded in a HD hook down in the 12" dia floor drain steel pipe. Chained the tail down with the tie down ring to 18 deg with the digital level.
I used 1/4" dia fuel lines on the VW powered SSSC and it had a fuel flow of 15 gph. Using the Cont C-85 on the JMR, but also wanted the fuel lines to take a Cont -200 fuel flow if I ever wanted to go to the 100 hp, 0-200. So I needed to step up the size of the fuel lines for more flow. Could have went to the 5/16" dia lines but there is a lot of fitting that you can't get in 5/16" so I went to the 3/8" dia fuel lines. I had all the alum lines and fitting that I needed from the Bearhawk project. Little over kill but easy to find any fitting that you might need. 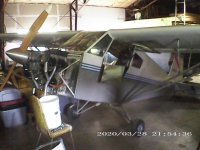 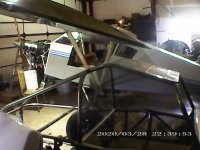 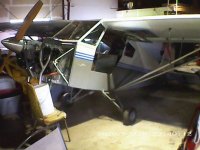 Been going over everything while I have more time. No use in calling for the inspection for a while the way things are at this time. Re-checked the timing today just to make sure it as close as I can get it. The C-85 is a little different in the timing , one mag is set at 28 deg and the other at 30 deg. Don't want to get them mixed up.
Also check the compression on the new MOH engine. #2 is little lower than the rest of the cylinders but the engine hasn't been ran since the overhaul. We will see after a few hours. I have had my lowest cylinder become my best after a few hours of hard running. I always go by Cont's manual in the breaking in the engine and have never had any problems.
Was thinking of pulling it out of the hanger today and doing the first run on the engine, but the winds was forecast for 25 mph winds, so I'll wait for a better day. Was 80 degs a few days ago and now below freezing in the morning. What the high winds were about. Our grid electric have been off two different times in the last week due to the high winds. That is when I love the solar system.
Last edited: Apr 11, 2020

Called the local FAA FSDO office and got a recording that everyone is working at home. Had a home number to call. Talked to a nice lady that told me they don't know when they will be back in the office and going out in the fields . Said that she thinks at least 2 to 3 more weeks. Told me that maybe I should try a DAR. No DAR's in this state and several hundreds of mile to one. So she gave me the inspectors email address and told me that I need to email him and try to get on his list of all the backed up work he need to do when he can get back to the office.
I have all the required papers filled out ( 8030-6, 8030-12, 8030-3 and Program Letter, pictures , W&B , etc ).
So hopefully I can get my inspection in the pipeline for work he needs to do when gets back to the office. Been building on the airplane for 10 years so 2 or 3 more months is nothing.
I took pictures this morning for the picture to send. They want 3 pictures. 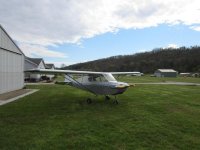 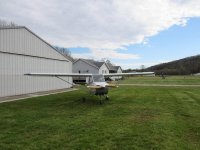 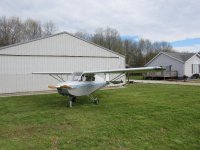 It's alive ! It's alive! Tied the JMR down outside and ran the engine for the first time since MOH on the engine. Didn't want to idle, think I will have to take the carb back off and check the idle passage in the carb for anything that I missed. Cont book says to run it for 10 minutes at 900 rpm for the first time . Has a list of run time and rpm's until the first flight. Left, rear valve cover pan gasket need attention with a small oil leak. Good to hear it run.

First taxi test today. Grass and clay runway finally dried out enough to mow yesterday. In the taxi test the airplane tracked straight with the rudder pedals in line with each other and with the rudder in neutral. The Matco brakes worked great. Taxied fast enough to get the nose wheel off with the elevator at full up, about 30 mph. Also got a little faster and the main landing gear started unloading and then I backed off. Did that 2 times. All with no flaps down. Everything feels very good. Engine pressure and temps looks good. Lots of power for the weight. I had 6 gallon of fuel in each wing tank and my 235 lbs for a total of 987 lbs of total weight. That is power loading of 11.61 lbs per HP. Had the cowl off setting the idle mixture and adjusted the idle rpm up a little and looking for any oil leaks. Everything is great.

FSDO in Charleston, WV (50 miles south) went back to the offices this week. I call and ask about an inspection for the JMR. I have the form letter, all paper work and pictures ready to send. Was told that they will not do it and to call a DAR or the FSDO office in Columbus, Ohio. There are NO DAR's in WV. The closest ones are in Cleveland, Ohio or Maryland. Same thing when I needed the SSSC inspected in 2007. It was inspected by the office in Columbus , OH. I called Columbus and they said no problem and the man that inspected my homebuilt in 2007 has not retired yet and will be getting in touch with me next week and start the paper work and schedule a date for the inspection. GREAT ! He did a good job on the SSSC and was a very nice person. Someone you could enjoy setting and talking to.
Been putting more time on the engine for the break-in.

Talked to the FAA inspector today. He said all of my paper work was good and he will be bringing the form for me to sign for being the repairman for this aircraft. He will be letting me know about the date for the inspection shortly. I will be getting a 50 miles radius test area from my airport.
All looks good.

The Main Landing Gear Placement.
Putting the tail down where the tie-down/ tail skid rest on the floor the wing is at 18 degrees.
Dropping a plumb bob down from the rear CG limit of 30 degrees ( 14.40"aft of LE of wing) , The PB hits the axle of the main gear. The main gear is located at 46.9% of the cord of the wing.
With an elevator area of 9.6 sq' and an up limit of 30 degrees, the nose wheel will lift off the ground at about 30 mph with full up elevator
This is at the speed I was wanting.
This is part of the #1 test card for the EAA's Flight Test Manual.
I did 2 test runs holding the nose wheel off and also getting the main gear unloaded and skipping on the surface for the speed needed to break in the brake pads.
My Bi-annual is out and I need to get it before any test flight. Hope my grandson will fly over and give it to me. I gave him his first lesson when he was about 10 years old in a C-172. Pops will show the young whipper snapper how its done
Waiting for 7/7/20
Last edited: Jun 27, 2020

All inspection panels off and ready.

OPS, forgot to take the spinner off. Glad I posted the pictures now.

Two men from the FAA in Columbus, Ohio office just left. One went over it with a fine tooth comb. While the other did the paper work.
Found 5 things.
#1--- One of the safety wires on the prop bolts was not as tight as he would like, ( Slight bow in the wire between bolt heads ).
#2 --- Two jam nuts on the tail wires were not tight.
#3 --- The elevator right and left half is joined together with a square plate with 4 bolts. One of the bolts has just 1 thread showing beyond the nut. He said remove a washer.
#4 --- On the right aileron , center hinge had one screw that was not tight. (Same screws as used the aileron hinges on a C-172).
#5--- rudder hinge pin without a cotter pin.

I wanted someone like him to do the inspection. Great.

I ask if he was around the area when the B-1 Bomber was built at North America Rockwell at Columbus,Oh. in the 70's. Said he worked there and was in the group that wrote the TO's for the B-1.
At that time I would go to the surplus store every couple months and spend $20 for $500 worth of hardware. I still have pulleys, turnbuckles, bolts, etc from there.
So the JMR is all signed off and ready to fly as soon as I take care of the 5 things. 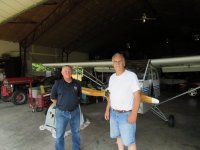 Picture of getting the important papers from the inspector. 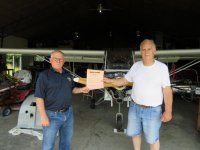 I took care of the 5 things the inspector found and emailed him pictures like I promised. Now putting all the inspection panels back on. Hot and windy today, so when the weather is better, I'll pull it outside and tie it down and finish the ground run time per the Cont engine maintenance manual.

The hydraulic fluid reservoir. If Piper can do it on the Cherokee so can I. I used a 1 pint metal can from Poly-Fiber that you get when you buy a pint of Poly-Tack fabric glue.
Clean it out good with MEK. Drill a 1/4" dia hole in the bottom. Silver solder a 1/8" pipe thread brass pipe coupling ( NAPA) over the 1/4" hole. Silver solder two steel mounting ears on each side. Solder a 1/8" dia brass vent tube to the cap. You can buy 12" lengths of brass tubing at good airplane hobby shops or look for an old ball point pin where a brass tube was used instead of a plastic tube.
The reservoir cost almost nothing.

I was planning on doing videos of each of the 18 test cards in the test flying. I have a camera mounted for a full view of the instrument panel and a couple to mount on the outside. I received an email that changed my mind on doing the videos. I will not be doing any more videos in the future.

Dana and Matthew recommended Vimco. I posted the take-off of the SSSC on the 900' strip for a trial video.
Easy to use. I need that, I'm lucky to find the off/ on of the computer

Having trouble with the Tiny Tach . Will read good for a little while and then jump around. When I think it was reading acturate, full power static with the 68"x48" Culver prop ( Wide Blade) was 2470 rpm. I think I'm going to try wrapping the sensor wire around the sparkplug wire as in Ron Wanttaja's posting.

Used the Tiny Tach in the SSSC for many years and no problems. Worked great. On both engines I drilled a 1/16" dia hole beside #1 on the slick mag cap and ran the sensor wire inside the cab and around the bare wire under the spring. Not much room for very many winding of the small wire.

How to install an electronic tach

EAA's Test Flight Manual test card # "0" and # " 1" finished. # 0 was the fuel flow test, #1 was the taxi test. Taxi's straight with the rudder pedals in line with each other and the rudder straight. Turns right and left at the end of the runway good.
Taxi fast enough to find the speed where with full up elevator the nose wheel lifts off, its about 30 mph. Went up to about 40 mph and the main gear was unloaded and wheels touching the grass about every 40'. No flaps.
I will be doing more taxi test just to get the feel of the airplane and do some more hard braking to get the brake pads broke-in by instructions.

Little Video my neighbor made.