Jetpacks currently suck. What are the flaws, and how can we overcome them?

I’ve been waiting for that comment for 80 posts, bmcj. Congratulations, you won the prize. Send $100 for postage and I will send it.

After many hours of drone flight test research, I discovered some interesting phenomena.
If the drone gets close to the couch base (see photo), there is no way to fly it away or prevent it from being drawn under the couch.
I then have to get up and pull it out. Apparently the air currents draw it in under the couch.
In other words, sometimes it sucks. :gig:

The Hiller flying platforms, Williams X-jet, Piasecki VZ-8, all worked but didn't get purchased by the military.

In the case of the Hiller, it didn't have a steady cruise mode, apparently, reports I read said it's stability made it "stand up"and slow down. If anyone has more info I'm interested.

The X-jet/WASP worked well, but the Army realized that it's noise made it too unstealthy for field use. Imagine them being used to get lines for troops to climb up the cliffs anyplace quieter than Omaha beach on D day. Imagine them at D day. Machine gun magnet. Civilian use just never happened. I'd love one for commuting. ( I also ride a street motorcycle )

The air jeeps are a bit big to be considered jet packs. Again, something interesting to try in the real world but other than the British guy who built a motorcycle sized one..... ( he also built a pulse jet bicycle and 360 swing set.... fun guy )

So a jet platform like the X-jet or a human Cuisinart multi copter look as close to practical to me in the one man fly like James Bond through the tree tops gizmo. I just think you can't get the range into tens of minutes on foot. Bigger, flying motorcycle/jeep sized toys are even more "practical"......... and at some point a Rotorway makes sense.

Sky hooks, that's what you need.

Aesquire, The Hiller platform tends to revert to hover. It takes extreme forward pitch to move forward.
Any co-axial will pitch up with forward motion because both blades flap up from the relative wind.
A

Ah, thank you. That explains the physics. I suppose that's just as true with a ducted prop setup. A good thing, since if the rear of the prop disc got more flow it would be unstable. All the films I've seen show very short forward flights, mostly in a figure 8 to demonstrate maneuverability.

Above the head multi copter with ducted fans looks like the best backpack arrangement for stability and efficiency but batteries are going to be the limiting factor. Battery or fuel weight.

I have zero experience with jet packs. Hang glider experience tells me that somewhere in the 80-100 pound range is the. Landing gear limit. My first gliders were in the high 40 pound range. I owned the biggest not-tandem versions. ( and tandem ones mostly flown solo ) With L/D numbers like the Space Shuttle, sink rate was the key to soaring. Later higher performing gliders ran 70-80 pounds and a few, over 100.

Jet pack pilots don't have to run, so can tolerate a bit more. Still, landing gear not made of flesh & bone seem necessary for any useful range.

A pair of jets like used by Yves Rossy on a hang glider or the existing powered harnesses gives you fair short takeoff capability. Cruise at around 45 mph. Maybe a future Bond movie will spark interest here.

Hello all, I'm late to this party, but these are my 2 cents.

The VTOL aircraft has a big problem regardless of configuration and size. It needs to generate more thrust than it's weight to be able to hover and accelerate upwards. Compare that to power requirements of a fixed wing aircraft which needs only a fraction of that trust because of it's high lift per drag ratio. Considering a L/D of about 10, the thrust needed by an airplane to fly constant speed and altitude is only 1/10 of it's weight. Much smaller engine and propeller is needed, leading to the well known characteristics of fixed wing aircraft as fuel economy, range, low drag, and generally high transport efficiency.

To design a similar weight VTOL aircraft, you need at least 10 times more thrust and much bigger engines/rotors as demonstrated by the V-22 Osprey. Not to mention in VTOL mode your wings don't do squat, they are just dead weight and the bigger rotor creates much more drag so you are ending with a much slower aircraft. The bigger engine also consumes much more fuel, as it's not optimised for cruise speeds, and that engine and fuel weight cuts into payload and you end with an aircraft that is slower, consumes more fuel and cannot carry as much stuff.

Nevertheless, I believe in the future for VTOL. People will want a VTOL personal aircraft that anybody could hop in to fly to the local supermarket or to cut the commuting time. Also such an aircraft would be really fun to fly and offer the means to go places inaccessible before because of limited time or remoteness.

Another technological approach for a more efficient VTOL aircraft is the "Lip Wing" concept: A wing to generate lift at slow speed and even in hover, helping and augmenting the thrust produced, reducing the need to have a bigger engine/rotor. Because of it's shape, the wing captures the rotor's intake low pressure and creates lift, similar to the duct intake of the Hiller VZ-1 Pawnee platform. A personal VTOL aircraft concept based on the lip wing principle that I'm working on right now is the ADR-1 (here: http://aliptera.com/#ADR-1)

A similar conceptual design I'm preparing for the GoFly prize competition, but with more stringent size and power requirements.
R

Thanks for sharing that. I hadn't heard of the GoFly prize before, so many others may not have either.

@Jedi - We should enter a paramotor!

@Revan - a paramotor would not work, there are some limiting rules:

Dusan said:
@Revan - a paramotor would not work, there are some limiting rules:

What does "almost" VTOL mean? I figure it must mean very STOL, which a paramotor most definitely is very STOL. We need a 30+ knot paramotor with a good muffler. It would be good to have some improvements to make it a bit more practical for transportation use than a typical paramotor, but it seems the basic requirements are there.

REVAN said:
What does "almost" VTOL mean? I.
Click to expand...

There was a thread a few months ago that went over this contest some. IIRC there is a link there to the rules.

A paramotor will not work, again, It's out of the size limit.
R

OK. Thanks for the clarification.

After looking over the rules/guidelines, I'm having trouble understanding the point of this competition. Using today's tech, I think taking a small helicopter, like a Mosquito ultralight and doing a serious noise reduction effort will have the best chance of doing what they want. Put a good muffler on the engine and rake the rotors to quiet the tip noise as much as possible to try to meet the noise constraints. With the rotors aligned lengthwise, it will fit between two planes 8.5 feet apart. From the language, it sounds like this is acceptable, that it can be wider than 8.5 feet transitionally. It just has to be able to get under 8.5 feet when it's static.

So, why would Boeing be interested in motivating people to try to make something like this? It sort of reminds me of the CAFE competition DARPA* did some years back where the winner of the competition prize was someone who entered a stock Cessna 172.

* I think it was DARPA, but it could have been sponsored by the FAA or some other federal entity.
S 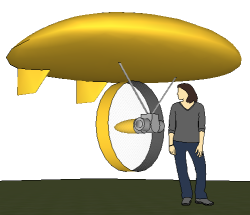 You could make it inflatable or just a thin skin over a foam core.

You could make it inflatable or just a thin skin over a foam core.
Click to expand...

If you can get this to fit under "8.5ft between any parallel planes" would work.
S

Dusan said:
If you can get this to fit under "8.5ft between any parallel planes" would work.
Click to expand...

Deflated or folded in half yes.

That is nice if it's packed in your truck, but the rules are that the aircraft needs to be under 8.5ft of any non transitory configuration. That means flying..
S

Dusan said:
That is nice if it's packed in your truck, but the rules are that the aircraft needs to be under 8.5ft of any non transitory configuration. That means flying..
Click to expand...

specifically flying or just when taxiing?

Especially flying. As I understand the rules, is ok to violate the size in transition to a flying configuration, e.g. from VTOL to horizontal, but every non-transient flying configuration needs to be under 8.5ft.
You must log in or register to reply here.
Share:
Facebook Twitter Reddit Pinterest Tumblr WhatsApp Email Link