Hey all, would there be any interest in a complete but not presently airworthy Isaacs Fury. 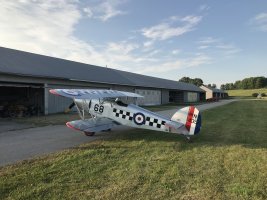 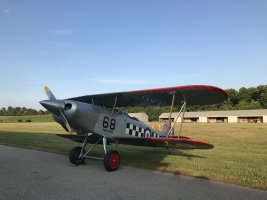 It was built in Daytona Beach, Florida starting in 1987 and flown from 1989 to 2004 according to the tech log. Logs show it was recovered with Ceconite in 2004 and signed off airworthy without further entries. Total tach time 469.0.

Full disclosure: it passed through several owners between 2004 and about 2018 and somewhere along the line the airworthy flying wires and fuel tank were misplaced. A brand new aluminum fuel tank has been made and installed but the current wing wires are just temporary cables for display with sizes and crimps that likely don’t meet spec.

The engine is a converted O-290G according to the logs, and the prop was replaced in 1999 with no reason given though with the record of fine tuning evident in the notes it could have just been to get a better match for the airframe.

I have logs, construction notes, and I’m sure I’ve seen the drawings around here for it.

As far as airplanes go, the Fury looks like it would be a lot of fun to fly. I’ve sat in it and it feels an awful lot like the rear cockpit of a Tiger Moth, not cramped at all.

The aircraft is located in Guelph, Ontario about an hour outside Toronto. If you’re planning on taking it to the US I have friends who are well-versed in getting ducks in a row to bring an airplane project across the border so we can set you up for success as well as anyone can.